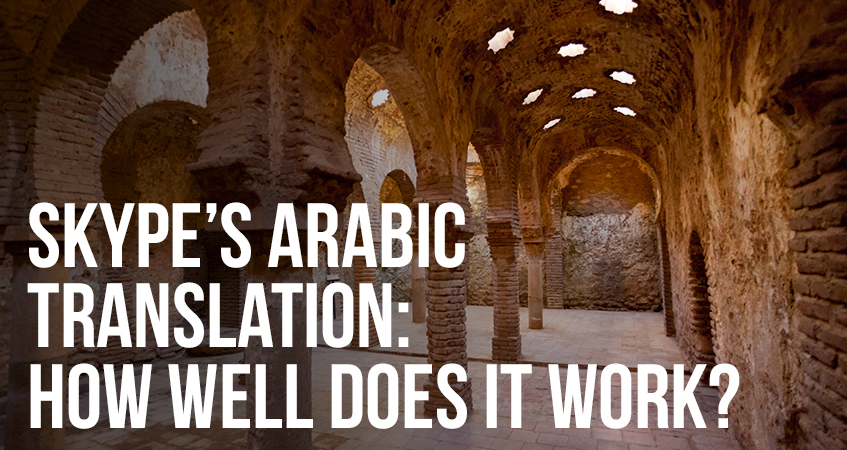 Microsoft recently announced a new feature for Skype: Arabic translation. Now, even if you can’t speak a word of the language, you can Skype in Arabic in real time.  But how useful is it? How well does it work, and in what situations?

On 8 March, Microsoft Translator added Modern Standard Arabic (MSA) to its list of supported languages. That brings the total number of languages supported up to 8 (the others are Chinese Mandarin, English, French, German, Italian, Brazilian Portuguese, and Spanish.)

Modern Spoken Arabic is a formalized version of Arabic that is taught in schools across the Middle East and North Africa.

Skype Arabic Translation: Who Should Use It?

Like all automatic translation available today, Skype’s Arabic translation is useful to specific groups of people in specific situations. Here are some groups who can benefit.

Traveller’s options for dealing with the language barrier have long fallen between two extremes. First, there’s the “sink or swim” option: immersing yourself in a new language, awkwardly thumbing through phrasebooks and occasionally resorting to charades. There is definitely some value in this approach.

Alternately, you can hire a guide to do the talking for you or stick to resort areas where most people speak English anyway, but this limits your potential travel experiences.

Skype’s translation can help you get around all that when you’re making travel arrangements. And while the real-time translation feature isn’t available on Skype Mobile, the same technology is available as part of a downloadable language pack for the Microsoft Translator app for Android phones.  That means you can use it even in places that don’t get mobile service and without racking up huge data charges. It can also translate images, which is excellent for reading menus, signs and other written material when you’re on the road.

Please note, if you’re travelling for business you should consider engaging a professional for all business-related communications.

Want to make some new, Arabic-speaking friends? Don’t speak Arabic? Use Skype! In this circumstance, it doesn’t matter if Skype’s automatic translation system doesn’t always get it right- you and your new friend can muddle through it, together.

In its blog post announcing its new translation capabilities, Skype suggested the technology could benefit non-profit organisations. And that’s true…at least in situations where professional interpreters are unavailable. The same features that make it attractive to travellers can make it attractive to non-profit workers without interpreter access. It’s certainly better than nothing.

That said, it’s even more important to make skilled professional interpreters and translators available to non-profit and charity organisations as much as possible. It’s vital that these organisations provide accurate, easily understood information to the people they serve, especially in crisis situations or when dealing with medical care. That’s why we’re huge supporters of Translators Without Borders and the work they do.

What happens when Grandma and Grandpa speak Arabic and their grandchildren don’t? Skype can help families to communicate even where there’s a language barrier.

Skype Arabic Translation: Who Shouldn’t Use It?

Are you socially awkward? Do you tend to fumble for words when you’re put on the spot? Skype’s new Arabic translation may not be for you. PCWorld’s Mark Hachman learned that the hard way during a test call with a Microsoft contractor named Dalia. Here’s how it went:

“Opening the conversation with this clunker did not help my cause. “Okay, Dalia, I understand that this conversation will take place with me speaking English, and you speaking Arabic, and I’ll try to make this the least awkward that I can, okay?”

Pause. Pause. Skype Translator has to parse all this, remember, then repeat what I said in Arabic. Pause. Smile. Smile. We have to keep staring at one another while we do this….

Basically, Skype Translator works best when you pretend you’re Barack Obama delivering the State of the Union address, rather than trying to explain to a highway patrol officer why you’re carrying a priest, a sheep, a length of rubber hose, and a canister of ether in the back of your vehicle. Speak clearly and distinctly, in other words.”

Anyone Who is Concerned About Accuracy

If you’re trying to have a conversation in which accuracy is crucial, a professional human interpreter is always the best choice. Skype is just a machine, and it’s prone to errors a human interpreter could easily avoid. For example, according to VentureBeat:

Here and there, the system made mistakes in translating both my English words into Arabic and the Arabic words from the woman I was speaking with into English. The results were sometimes funny, because sentences didn’t always look or sound grammatically correct or complete. A few times she had to repeat herself once or even twice in order to get her message across. For instance, when she was trying to say “I have some work to do,” the translation at first came out “I have a bad worker.”

Skype’s automatic translation features are impressive, but it’s important to understand their limitations. What do you think of it?

Previous Post 8 Strange and Grotesque Good Luck Charms From Around the World
Next Post Xerox Easy Translator: Behind the Hype