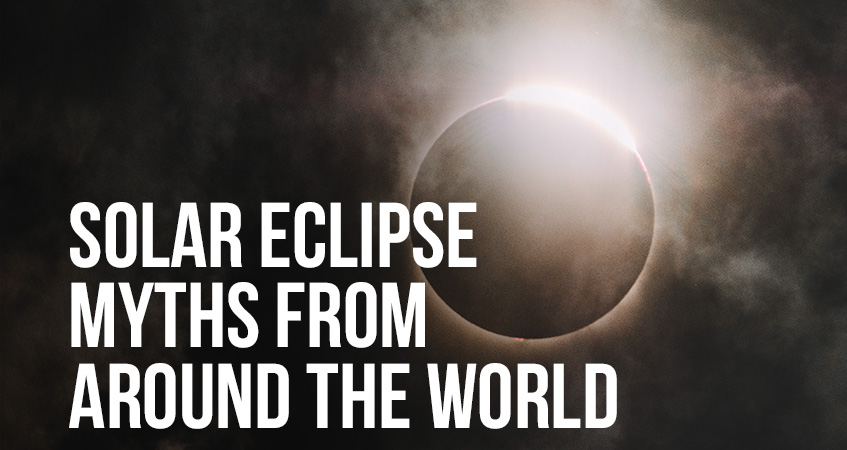 Today, the United States will experience a total solar eclipse. It’s a once-in-lifetime astronomical event, and people are going crazy with excitement. But it wasn’t always this way. Historically, eclipses have fueled myths and superstitions in many different cultures, and some of them are quite terrifying. So, in honor of the 2017 eclipse, here are 8 solar eclipse myths and superstitions from around the world.

As Griffith Observatory director E.C. Krupp told National Geographic,  “the earliest word for eclipse in Chinese, shih, means “to eat.” The ancient Chinese believed that solar eclipses were caused by a giant dragon eating the sun, and they sometimes tried to scare the dragon away by beating pots and pans.

Eclipses were a bad omen for emperors, but they were an even worse omen for the emperor’s astrologers. In 2134 BC, two astrologers lost their heads as punishment for failing to predict a solar eclipse.

In Viking mythology, eclipses are caused by a wolf named Sköll, which is Old Norse for “treachery.” Sköll chases the sun through the sky. When Ragnarök comes, he will catch the sun and consume her completely. So, each solar eclipse is like a preview of the apocalypse. Comforting, no?

In Korean mythology, there are several different realms in addition to our own. One of these, Gamangnara, is completely dark, with no light at all. To remedy this, its king sends gigantic hounds called the Bulgae to our world to hunt the sun and the moon and steal them away.  But every time the hounds bite the sun, they burn their mouths and run away.

According to one myth from Vietnam, when the sun goes dark, blame it on a giant, evil toad.

Not all eclipse superstitions are negative. In Italy, solar eclipses were thought to be an especially good time to plant flowers.The resulting blooms will be brighter and more colorful than flowers planted at any other time.

Solar eclipse myths from the Arapaho

The Arapaho Native American tribe believed that the sun and moon were brother and sister, so they saw solar eclipses as an act of cosmic incest. As astronomer Anthony Aveni explained to the New York Times,” An obvious question was prompted . . . “What are they doing having sex in the sky?”

In the language of the Pomo Native American tribe, the word for solar eclipse translates to “Sun Got Bit By a Bear.” As the story goes, one day, a bear went for a walk along the Milky Way. But soon, he found his path blocked by the sun, and the two began to quarrel. The bear bit the sun, causing a solar eclipse, then went on his way.

In Hindu mythology, solar eclipses are caused by a demon named Rahu. As the story goes, Rahu stole an elixir of immortality from the gods. But the sun and the moon saw him take it, and they alerted the god Vishnu. Vishnu beheaded Rahu, but not before Rahu managed to swallow enough of the elixir to render his head immortal.

Since that day, the vengeful severed head of Rahu roams the sky eternally, trying to devour the sun and the moon. When he catches the sun, he eats it, causing an eclipse. But because he’s just a severed head, the sun falls out the back of his throat moments later.

The same story is found in other countries in the region, as well, like the predominantly Hindu island of Bali in Indonesia.  And according to Space.com, the story is so well-known, it’s even been used in advertising:

“In 1983, when a total solar eclipse passed over Indonesia, representations of this traditional story were used extensively in advertising, he said. Two competing beer manufacturers on the neighboring island of Java (which is predominantly Muslim) both used images of the demon Rahu on their eclipse-themed brews. “

Stories like these may not translate well. And that’s why it’s important to use a skilled, professional translator. Translation is not just about substituting one word for another, it takes cultural knowledge to ensure the resulting translation is just as effective for a new target audience. Sometimes, that means substituting a different cultural reference.

At K International, our skilled team of international copywriters and marketing translation experts uses their inside knowledge of your target language and culture to ensure your marketing message comes through clearly and accurately.  Want to learn more? We’d love to hear from you!