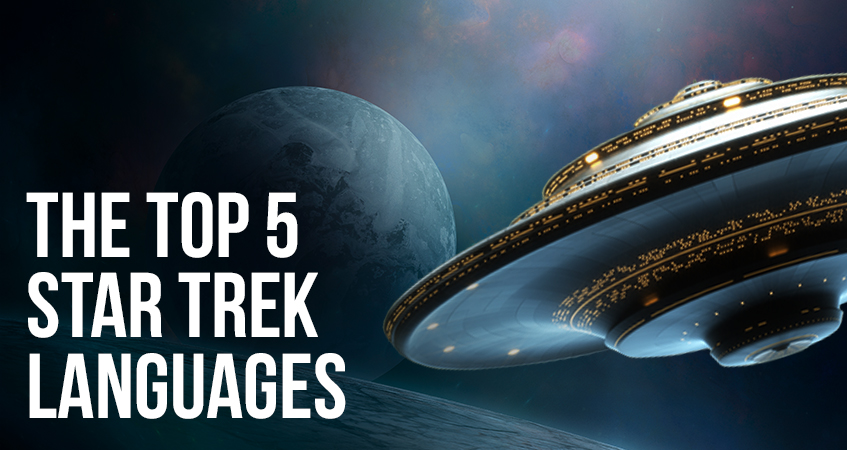 This September, we’re celebrating two important birthdays. On the first of the month, K International turned 30. Meanwhile, September 7th was the 50th anniversary of Star Trek.  In honour of the latter occasion, let’s take a look at some of the most memorable Star Trek languages, and the alien races that speak them.

Spoken by: The Klingons

Klingon is the most famous of the Star Trek languages. It is a fully-fledged constructed language, which means it has a set grammar, syntax and vocabulary.  You could learn it yourself, if you wanted to invest the time and impress the opposite gender at your local Star Trek convention.

Learning Klingon is not easy. Although the language only has 3,000 words, it was designed to be as different from most human languages as possible. It is guttural and harsh. And don’t expect it to be appreciated outside of your local Star Trek convention; actors speaking Klingon (as well as those around them) routinely have to have spittle wiped off of them between takes. Apparently, the Klingon race has never heard the saying “Say it, don’t spray it.”

There are an estimated 20-30 people who speak it fluently.  One man actually went so far as to try to raise his son as a bilingual Klingon native speaker, but it didn’t work.

You can read The Epic of Gilgamesh, Hamlet, Much Ado About Nothing and the Tao Te Ching in Klingon translations, and there is actually a Klingon version of A Christmas Carol.

Want to learn more? Check out the Klingon Language Institute.

Spoken by: The Vulcans

Golic Vulcan is a constructed version of the language created by fans. Unlike Klingon, it was never accepted officially by Paramount, but the Vulcan Language Institute has compiled a lexicon of around 12,000 words. They’ve also translated terminology from other sci-fi and fantasy worlds, including The Chronicles of Narnia, His Dark Materials and of course, The Lord of the Rings.

You can read the prologue to The Canterbury Tales translated into Vulcan here.

Spoken by: The Children of Tama

The unique Tamarian language was the driving force behind the Star Trek: The Next Generation episode “Darmok.” In this episode, Captain Picard and his crew encounter a race called the Children of Tama, who teach them all about the limitations of machine translation.

You see, the Children of Tama speak entirely in allegories, referencing their own folklore to communicate ideas and intentions. The crew’s universal translator can only translate the Tamarian language word-for-word. But without knowing the Tamarian’s folklore and history, there’s no way to make sense of it.

There’s been a lot of debate about whether or not it would actually be possible to use a language like this to communicate. Regardless, it’s an excellent metaphor for some of the more complicated aspects of translation.  Like the imagery used by the Tamarians, some types of speech are impossible to meaningfully translate word-for-word.  Idioms often don’t make sense; jokes are not always funny.

Spoken by: The Ferengi

Next up, we have the Ferengi language. The Ferengi were a comically big-headed race known for their collective ear fetish and their rapacious capitalism. They hailed from the detestably wet and humid planet of  Ferenginar, and their language reflected the climate of their home planet. Just as the Inuit are rumoured to have 50 words for snow, the Ferengi language has 178 different words for rain.  It also has no word for “crisp,” because “the humidity makes everything soggy, sad and damp.”

The Ferengi writing system is quite interesting, according to Memory Alpha:

“Ferengi writing looked much like a flowchart, with many sixty degree angles. Text radiated from the center outward, which indicated the direction of writing as well. Ferengi text could be written with or without a central hexagon, radiating from one side of a hexagon only and in single horizontal lines on signs and short notes. “

Spoken by: The Romulans (or the Rihannsu)

As the Romulans are related to the Vulcans, their languages sound quite similar to human ears. According to the Star Trek information site Memory Alpha, the group that became Romulans made a conscious decision to stop speaking Vulcan:

“One thing they agreed on quickly was that they could not stop being Vulcan while they still spoke the language.” In order to rectify this problem, the Romulans went back to old or “High” Vulcan and “aged” the language in another direction.

The Romulan language is written in a font inspired by old LED displays.

What’s your favourite of the Star Trek languages? Let us know in the comments!

Tags: Star Trek
Previous Post How Much Do You Know About World Languages?
Next Post How to Say Peace in 35 Languages