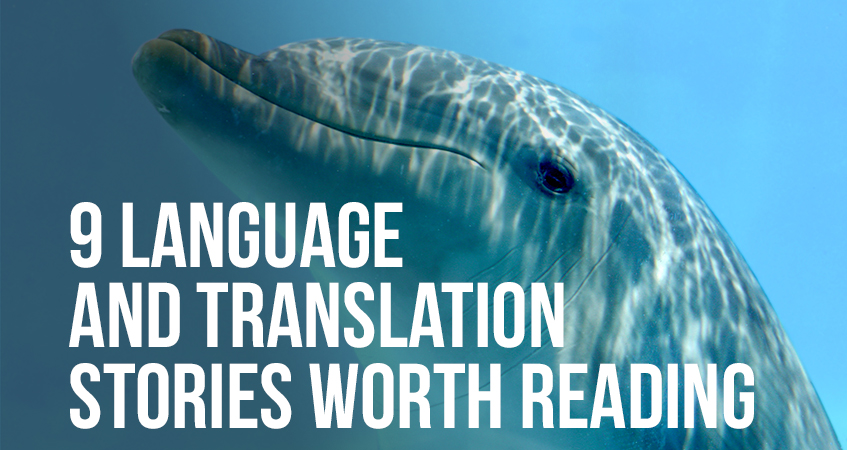 Waiting impatiently for the weekend to start? We’ve handpicked 9 interesting stories from the world of language and translation to keep you informed (and amused):

If you’re a Star Wars fan, you’ve probably seen the Last Jedi trailer already. If you’ve missed it, you can watch it below. Go ahead, we’ll wait:

So, it’s time for the Jedi to end, is it? That line, from the presumed Last Jedi himself, Luke Skywalker, naturally prompted a flurry of online commentary and questions. And then, the French version of the trailer came out, prompting even more questions.

“[T]he dubbed trailer ends with the line “le temps est venu pour les Jedi d’en finir,” which translates to “the time has come for the Jedi to put an end to it . . . Disney France is aware of the difference in meaning — but decided to keep it that way regardless.”

Is it a clue? A red herring? What do you think? Feel free to share your theories in the comments!

Emoji translation sounds like a gimmick, at first.  But a new app from Samsung Electronics Italia that “translates” the expressive little icons is actually a groundbreaking communication tool for people with aphasia.

Aphasia is a communication disorder often caused by brain injuries and strokes.  You know that feeling you get when you want to say something but you can’t find the words? Aphasia sufferers get that all the time,  often even for the simplest conversations. Using emoji can help.

“The Little Prince” Now the World’s Most Translated Book

The award for “the world’s most translated book” (aside from the Bible) now goes to Antoine Saint Exupéry’s novel “The Little Prince.” The popular children’s novel has just been translated into Hassanya, an Arabic dialect from North Africa. It’s now available in 300 languages.

Foreign language proficiency is about to become even more important for UK students, according to Quartz’s Kim Ridealgh. She observes:

When the UK leaves the EU there will be no member state remaining where English is the lead official language . . . To to trade with the EU, the UK will need high-level negotiators fluent in German, French and Spanish, which it currently does not have.

Accurate Machine Translation is Still Hard, According to Facebook Engineer

Even with the latest neural machine translation technology, consistently accurate translation is still hard to come by without human help.  As Facebook engineer Necip Fazil Ayan admitted during a talk at the F8 conference, current obstacles include slang, informal spellings, “low resource languages,” and scaling.

Are you fluent in more than one language? You may perceive time differently based on the language you’re using, according to a new study. Researchers found that Swedish-Spanish bilinguals changed whether they visualized time as a distance (like in Swedish) or as volume (like in Spanish) depending on the language of the prompt word they were given at the start of the study.

Humans Could Be Talking to Dolphins by 2021

At least, that’s the hope of Swedish startup Gavagai AB. The company hopes to use AI language analysis to decode the meaning of all of those whistles and squeaks and create a dolphin dictionary.

And what will the dolphins have to say to us if we do decode their language?  Here’s a simulation of what this technology could look like in action:

The world has been watching the French election drama intensely. But how to translate those campaign slogans? France24.com has an amusing article on some of the awkward English translations of French campaign slogans.  Highlights include “Unsubmissive France,” which France24 notes has some “not-so-subtle S&M overtones”. And  “France Untamed,” which is apparently actually also a Victoria’s Secret body spray.

This ladies and gentlemen is why we don’t just translate marketing slogans word-for-word and expect them to work in another language. If you’d like to avoid mishaps like these for your business, might we suggest specialized marketing translation or transcreation services?

Are you a fan of the science fiction series “The Expanse?” Wired has an interesting article up on the Belter language in the show.

Belter is a creole, the language of an underclass that lives by scavenging the Asteroid Belt. It’s based on English, but with inputs from Chinese, Slavic, Japanese, Germanic and Romance languages.  Because the show doesn’t use subtitles, the Belter you see on the show is basically more of an accent. But there’s actually a constructed language behind the accent.

According to Wired, actor Andrew Rotilio makes it a point to learn his lines in the original Belter first:

“The language is really at the centre of who these people are. It changes you, it affects you,” says Rotilio. “It’s like when you put on a period costume and you play King Henry, and you become King Henry. It’s like that, but with the language.”

Are there any interesting stories about language or translation that we’ve missed? Share them in the comments!