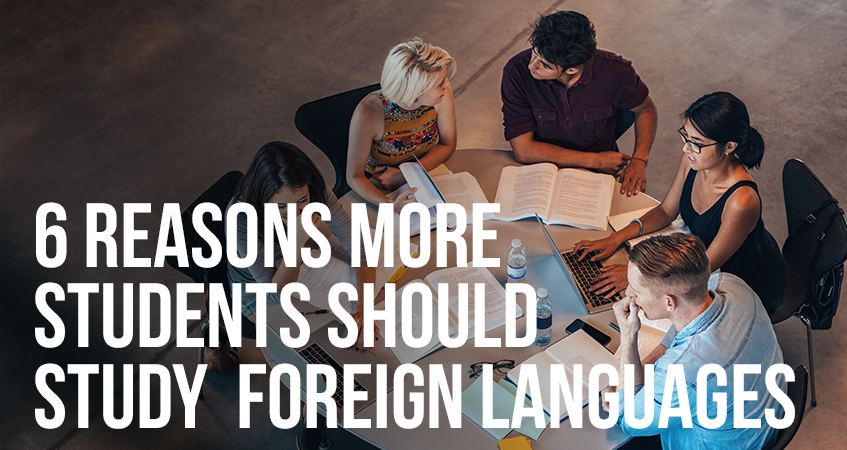 Why should students bother to study foreign languages? Doesn’t everyone speak English now anyway? And where are our universal translators? They should be coming along any day now, right?

The British Council’s 2016 Language Trends Survey is out, and the results are generating the usual (and justified) wringing of hands and clutching of pearls. Apparently, it’s become so unpopular to study foreign languages at A-Level that the subject has become “financially unviable” for some state schools to offer.

Meanwhile, STEM subjects like maths and science are all the rage. Foreign languages are seen as less important, less of a priority. Students don’t see the benefits and the exams are notoriously brutal.

What to do? As Vicky Gough, Schools Advisor for the British Council wrote on The Huffington Post:

[W]e need to recognise that languages aren’t a waste of time – they are good for young people, good for business and good for life. Parents, schools and businesses can all play their part in this respect and while we may have a long journey ahead of us to get language learning back on track, it is an important journey to make.

So, in the spirit of doing our part, here are 6 reasons young adults should study languages:

According to the report, the UK’s lack of foreign language expertise is already hurting the economy. It turns out English is not, in fact, the only language for business across the entire globe. In fact, as Mark Herbert, British Council schools programmes head told City AM:

“The country’s current shortage of language skills is estimated to be costing the economy tens of billions in missed trade and business opportunities every year.”

That’s quite a chunk of change. Can you help fill in the gap?

Want to make more money? Speaking another language can help. It depends on where you work and what field you’re in, of course. But the opportunity is certainly there. For example, according to one survey, 2/3 of all business executives speak more than one language. Meanwhile, studies have shown differences in pay rates for bilingual employees that range from 3.6 percent  to a whopping 20 percent more than employees who only speak one language.

Plus, you could always work in the translation industry. Demand is booming and wages are rising!

It’s true…bilinguals are sexier, at least according to this survey from 2013.  79 percent of respondents said that bilingual individuals were more attractive. However, there’s an important caveat. Certain languages are sexier than others, with French, Italian and Spanish taking the top three slots for romance. Speaking Korean, on the other hand? Possibly useful, but not romantic.

When you learn a new language and begin to make use of it in your daily life, it actually changes the way your brain works. It’s like making your brain do push-ups, or aerobics. And like physical exercise, the mental exercise you get from language learning may help stave off the ageing process. For example, studies have shown that learning a second language can delay the onset of Alzheimer’s disease, dementia and memory loss.

And while most studies have been done on children raised bilingually from infancy, this study showed benefits even for those who learned a second language as adults.

Want to make yourself smarter? Learning a second language doesn’t just help your brain age better. In small but significant ways, it helps your mind function better in day-to-day life, as well.

According to the Society for Neuroscience, bilingual children and adults are better able to focus than their peers. They also have denser grey matter in the parts of the brain that control language and speech.

Bilingual brains may also be more efficient at processing information and solving problems, according to researchers from the University of Houston:

“The bilingual has to lift more weight than the monolingual, because bilinguals experience competition within and between both their languages while listening to speech,” the researchers told Live Science, in an email signed by all of them. “But the bilingual is also stronger, because they’ve been mentally ‘working out’ like this for their whole life.”

When you can speak the language, travelling is a whole new experience. To quote professional travel writer Seth Kugel,

Somewhere down the line, if you can get to even a moderate level of fluency and get yourself overseas, you’ll be allowed into strange and fascinating worlds that you’d otherwise never be able to access.

Plus, you’ll stand out from the crowd of British travellers, most of whom don’t bother to learn even a few courtesy phrases before they leave the country.

So, there you have it. Learning a foreign language can make you sexier, smarter, richer and a better traveller.  What are you waiting for? You’d better get started!