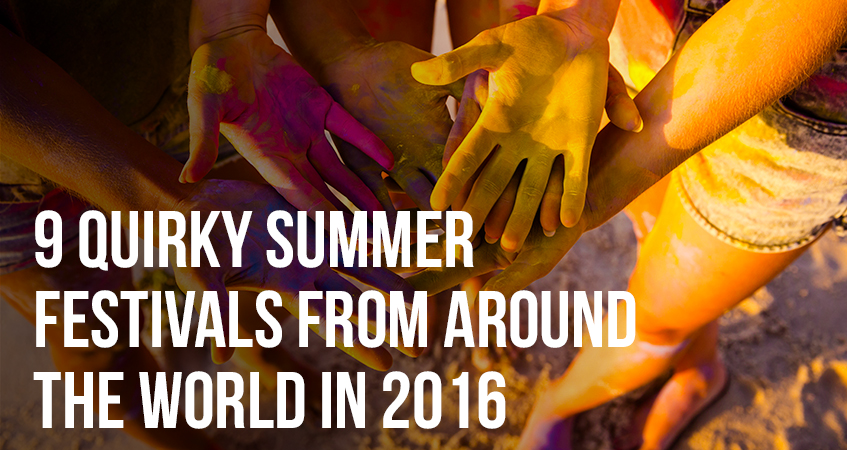 Summer is almost here! Do you have holiday plans yet? To help out all you procrastinators, we’ve handpicked 9 interesting and unusual summer festivals from around the world. Why lie on the beach and get sand stuck everywhere when you could be attending one of these instead?

Bodies and Beats, otherwise known as the World Bodypainting Festival, is a three-day celebration of the art of bodypainting. The festival features music, bodypainting workshops, and some seriously surreal painted-on costumes.

The main attraction is the “Body Circus” Ball. According to the festival website, the ball includes “Painted bodies, fire-breathers, burlesque dancers, freaks plus the finest club sounds.”

Wife carrying is a Finnish sport with an old and storied (if not exactly honourable) history. It was inspired by a legendary gentleman by the name of Herkko Rosvo-Ronkainen. Rosvo-Ronkainen was much like Robin Hood, only without the heart of gold. He and his band of robbers lived in a forest and regularly pillaged the surrounding villages, stealing women along with food and other items.

No women are stolen in modern-day wife carrying, fortunately. In this sport, men carry their female partners in a race around an obstacle course. The winner gets the woman’s weight in beer, among other prizes. Despite the name of the sport, participants do not have to be married to each other.

Each year in August, artists and performers from all across the world converge on Edinburgh for the Fringe, the world’s largest arts festival. The festival lineup is eclectic: there’s everything from music to theatre to circus acts to cabaret and more. If you’re willing to brave the crowds, you’re sure to find something entertaining.

When: 28-29 June
Where: The town of Haro in the La Rioja region of Spain

Do you love wine? This is the festival for you! Every year the villagers of Haro celebrate the feast of St. Peter by climbing a mountain and throwing gallons of red wine at each other.

Puck Fair bill itself as “the oldest fair in Ireland.” Nobody is quite sure when it got started, but there’s documentation showing it existed as far back as 1603.

On the first day of Puck Fair, the locals gather in the morning for a horse fair. Then, they ride up into the mountains to catch a wild mountain goat. The goat is crowned “King Puck,” and rules over the town for three days along with the Queen of Puck Fair, a local schoolgirl.

Under King Puck’s rule, the town spends the next two days celebrating, with pubs open an hour past their usual closing time. There are also plenty of vendors to buy from and lots of Irish cultural activities. The goat is relieved of his crown and released back into the mountains on the last day of the festival.

When: 5-14 August
Where: Lorient, Brittany, France

Since 1971, the people of Lorient have hosted a festival celebrating all aspects of Celtic music and culture. Music includes everything from traditional pipebands to modern rock ‘n roll. The festival’s Grand Parade of Celtic Nations, with thousands of performers parading about in their national costumes, is not to be missed.

In 1944 or perhaps 1945, the citizens of the Valencian town of Buñol started throwing tomatoes at each other during a traditional town celebration.

A new and strange tradition was born. Now, people come from around the world to participate in the world’s largest tomato fight. Some statistics you might find interesting:

What is it with the Spanish and food fights, anyway?

The Boryeong Mud Festival was originally conceived in 1998 as a marketing stunt for a local cosmetics company. Since then, the festival has grown into an attraction in its own right.

Mineral-rich mud from the Boryeong mud flats is carted into the beach in Daecheon. Koreans and tourists alike converge on the beach to play in the mud. Activities include games, slides, a giant mud bath, the “Mud Self Massage Experience(!!)” and more. Indulge your inner child (or your inner pig) and leave with an improved complexion!

If you like Renaissance festivals, you’ll love Visby’s Medieval Week. For one week, the entire town basically turns into a giant Renaissance Faire. Well, I suppose technically it’s a “Medieval” Faire, but you get the idea.

There are tens of thousands of people dressed like they’ve teleported in from the Middle Ages, jousting, dancing, shows and vendors galore. Plus probably a few random Trekkies who can’t pass up an opportunity to cosplay like the Starship Enterprise landed in Medieval Europe.

What are your favourite summer festivals? Let us know in the comments!