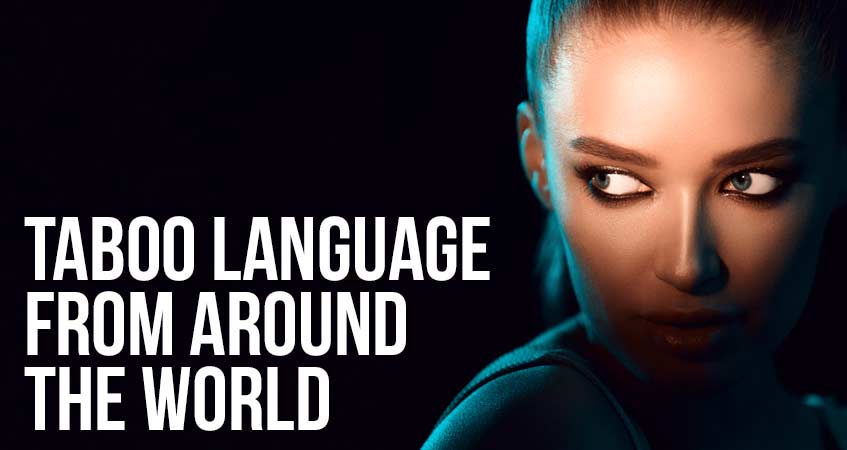 What is taboo language? Sometimes, politeness is as much about what you don’t say as it is about what you do say.  Swearing is part of that –  even today, when those “7 dirty words” have become a lot less dirty, there are still plenty of situations where you’d want to avoid using them. But swearing isn’t the whole story. “Language taboos,” words people aren’t allowed to say, are common to many cultures, both ancient and contemporary. Here are 5 examples of taboo language from around the world. Some of them may surprise you!

“Mother-in-Law” jokes were once a staple in Western comedy. You might not get along with your in-laws, but what if you literally had to treat them like Voldemort? An entire category of joke would have never existed!

Some cultures follow a practice called “avoidance speech,” where it is forbidden to say your mother-in-law or father-in-law’s name.  The details of this taboo vary by a specific culture. The taboos most commonly affect daughters-in-law, and they don’t always stop with just names. For example, consider the Kambaata language of Ethiopia.  As Bryant Rousseau explains in the New York Times,

Some married women who speak the Kambaata language of Ethiopia follow ballishsha, a rule that forbids them from using words that begin with the same syllable as the name of their father-in-law or mother-in-law.

This rule can complicate a conversation, but there are workarounds. Certain basic words in the vocabulary come in synonymous pairs. “One is the normal term, used by everybody; one is the term used by women who are not allowed to say that word,” said Yvonne Treis, a linguist at a French research institute, Languages and Cultures of Sub-Saharan Africa.

Some languages also have rules about which words you can use in the presence of your in-laws. And in some Australian aboriginal cultures, men aren’t even allowed to speak to their mothers-in-law. Which might sound like a relief, until you realize how much it would complicate family gatherings.

However, in other languages, that’s not necessarily the case.  For example, in French-speaking Quebec, the words for “chalice” and “host” are considered “some of the roughest words in the language.”

Centuries ago, in English, religious oaths were much more offensive than, say, the c-word or the f-word, both which were used quite casually in medieval times. In one manuscript that dates back to 1528, a monk even used the f-word to describe his abbot. Obviously, the meaning wasn’t complimentary, but the monk in question clearly wasn’t afraid of being struck by lightning, either.

Of course, by the Victorian era, the pendulum had swung the other direction. Now, anything that might even remotely be associated with sex was taboo.

Of course, words relating to sex are (or were) taboo in many cultures. But the Victorians took it to an entirely different level.

It was considered impolite to say “leg,” for example. Fun fact: That’s why we now eat chicken “drumsticks.” Pants or trousers were called “inexpressibles”,  and breasts were the “upper stomach.”

And the word “bull” was also a no-no. Apparently, the Victorians were afraid that saying “bull” would get people all hot and bothered. (Yikes!) Instead, a proper Victorian would say “cow brute, a gentleman cow, a top cow, or a seed ox.”

Which brings us to our next type of taboo: the names of certain animals.  These taboos usually date back much earlier in human history, when people were more dependent on animals and also had more reason to fear them.

For example, many languages, including Germanic languages like English, use words for “bear” that aren’t related to the original Indo-European root word. The English word “ber,” for example, derives from “the brown one.” Russian and Czech uses “medved,” which means “honey eater.”  Baltic languages, like Lithuanian, use words that derive from the Indo-European root *tlakis, which means “hairy.”

Some linguists believe this is because saying the actual Indo-European word for “bear” was taboo. It was not done, except perhaps during rituals, either for religious reasons or because people believed that saying the word would summon one. So, instead of saying bear, people said “the honey-eater” or “the brown one.” Over time, they stopped saying the “true name” almost completely.

The strength of the language taboos of old is fading in many English-speaking cultures.  Of course, you still want to avoid using “strong language” in many business and professional contexts. And probably when you’re visiting your grandparents. But George Carlin’s “7 dirty words” are no longer quite so unspeakable.

Here’s the strongest modern-day taboo: words that degrade people based on factors like culture, sexual orientation, ethnicity, or disability status. to see how much things have changed over the past century, all you have to do is pick up a copy of The Adventures of Huckleberry Finn.  Language like that was once commonplace, but thankfully it’s no longer acceptable.  To quote The Economist, “Western taboos now respect neither god nor sex, but they do respect individuals. And this is as it should be.”

Changing taboos can cause problems for businesses, especially when your business is international. For example, in 1971, German babywearing company Didymos introduced a baby wrap to help European women carry their babies hands-free. It was inspired by a trip the founder to Mexico. There, she saw indigenous women using similar wraps. She named the print “Indio”, having no idea that term was often used as a slur. But over time,  the product name rightfully became an issue.

In 2016, the controversy came to a head, and Didymos received a thorough social media shaming. The company renamed the wrap “Prima.” But the damage to their reputation remains. (Note: there are also concerns about cultural appropriation based on the design itself).

5 thoughts on “Examples of Taboo Language From Around the World”