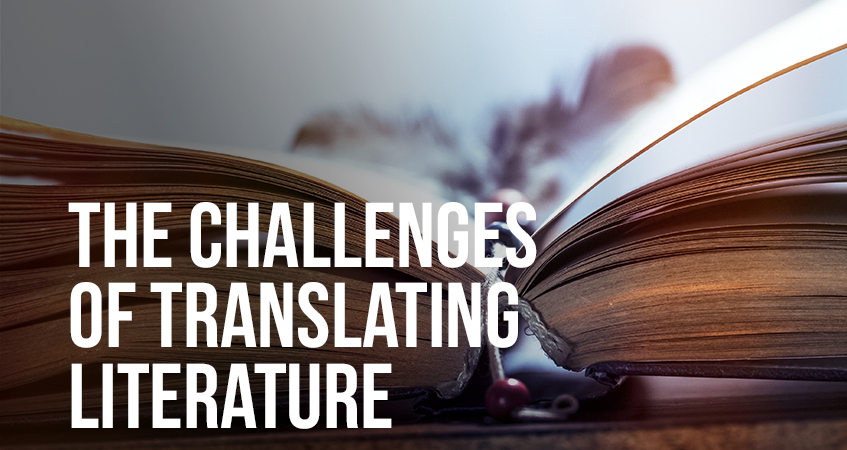 Why is literary translation important?

Literary translation is of huge importance. It helps to shape our understanding of the world around us in many ways. Reading Homer and Sophocles as part of a classical education in school helps to build an understanding of history, politics, philosophy and so much more. Meanwhile, reading contemporary translations provides fascinating insights into life in other cultures and other countries. In a fast-paced world so rife with misunderstanding and confusion, such efforts to share knowledge and experiences across cultural boundaries should be applauded.

The history of literary translation

History has seen countless translators come and go. Many of their names we will never know, but some – King Alfred the Great and Geoffrey Chaucer, for example, who both translated Boethius from the original Latin – had the power and influence to ensure that their translation efforts were not lost to the sands of time.

What makes literary translation so difficult?

The translation of literature differs greatly from other forms of translation. The sheer size of the texts involved in literary translation sets it apart. Tackling a translation that runs to hundreds of thousands of words is not a task for the faint-hearted. Nor is recreating poetry in a new language, without losing the beauty and essence of the original work.

One of the key challenges of literary translation is the need to balance staying faithful to the original work with the need to create something unique and distinctive that will evoke the same feelings and responses as the original. This can be particularly challenging when it comes to translating poetry.

Poems are written with incredible attention to detail. Not only are the words and phrases important, but the number of syllables and the entire rhythm of the completed work. It’s a challenging task to complete just in one language, let alone when trying to recreate a poet’s work during a translation. Daniel Hahn, director of the British Centre for Literary Translation, sums up the issue beautifully:

“There’s not a single word in any of the languages I translate that can map perfectly onto a word in English. So it’s always interpretative, approximate, creative. Anything that is, itself, a ‘linguistic’ quality will by definition be anchored in a particular language — whether it’s idiom, ambiguity, or assonance. All languages are different.”

As literary translators will attest, a single word can be extremely troublesome. The author of a work of fiction has chosen that word for a good reason, so the translator must ensure that it is faithfully delivered in the target language. However, what if no direct translation is available? Or what if several options exist, each with a slightly different nuance? Urdu language translator Fahmida Riaz outlines her approach to such thorny issues:

“Every piece you translate comes from the pen of an individual, so you have to give it an individual treatment. I try to retain the ambience of the original culture, rather than the language, as it is reflected in the text.”

Translating novels is just as tricky as translating poetry – and can often be more so. Best-selling author Patrick Rothfuss explains that it is not just the length of the text involved which is problematic:

“Names are important things. And real names, names that actually exist in the world, don’t make a lot of literal sense. This is because real names tend to accrete and evolve over time.

“I work hard to create real-seeming names for things in my world. Names that give a strong impression without actually saying anything. Names like Mincet lane, and Cricklet, and Downings.

“These real-seeming (but in reality made-up) names sound really good in English, but they’re a huge pain to translate.”

Then there’s the need to stay true to the original text while not translating it literally. It’s about recreating the atmosphere of the original novel without translating it word for word. Humour, irony, plays on words and plotlines revealed by implication rather than explanation all serve to make this even harder.

A further complication is the assumed knowledge of the reader. References to customs, practices and traditions may be easy to understand when reading a novel in one’s own language, but how does a translator deliver that level of built-in knowledge to a reader in another country who may be unfamiliar with the original language’s cultural quirks?

What skills does a literary translator need?

Clearly, literary translation requires a very particular skillset. The translation of literature is a far more creative art than many forms of translation. When translating a pharmaceutical product information leaflet, for example, it’s essential to deliver text that is a word for word interpretation of the original. However, for the translation of prose and poetry, creative writing ability is just as important as linguistic prowess.

Confidence in one’s ability is also essential. It’s fine to get bogged down with how to truly represent the meaning of a sentence – or even a single word – but the translator also needs to know when it’s time to make a choice and move on (and also when, several pages later, that nagging doubt about going back and making changes needs to be listened to!).

The ability to deliver continuity is also essential –, particularly in long novels. Remembering facts (like the minor character mentioned some 30,000 pages being the hero’s cousin by marriage rather than blood) will save an awful lot of flicking backwards and forward to check things.

The state of the literary translation industry

“The statistics show a steady growth of literary translations over the past two decades in absolute numbers and this is very encouraging. General translations grew by 53% between 1990 and 2012 and literary translations by 66%. This is of course reflected in only marginal percentage growth due to the growth in the overall publishing output.”

The LAF report also highlighted the diversity of source languages when it came to translation for English and Irish readers. Swedish, Dutch, Norwegian, Arabic and Japanese were all among the top ten languages translated. Eastern European languages, on the other hand, were woefully underrepresented, meaning that:

“… we are clearly missing out on entire swaths of literary landscapes in our immediate neighbourhood.”

The changing face of literary translation

Literary translation has undergone something of a renaissance of late. The changing of the Man Booker International Prize in 2016 to reward the translator of the winning novel on a par with the author represented a significant shift in the importance of literary translation.

Also telling is Amazon’s eagerness to take on the translation of literature – clearly there is money to be made from investing in literary translation. Its translation publishing arm, AmazonCrossing, has risen rapidly to prominence, accounting for 10% of all translations in 2016 and backed by the financial strength to roam the world in its quest for exciting literature. AmazonCrossing is now the most prolific publisher of translated fiction in the US. It covered 15 languages in 2016, including Indonesian, Hebrew, Russian, Chinese and Finnish.

This exciting growth bodes well for the future. The translation of literature is hugely important in our modern society and Amazon is well-positioned to play a key role in promoting the sharing of literature between countries, translating into English as well as into other languages. With so many political and economic divides and injustices in the world, anything that can bring us closer to understanding other cultures surely deserves to be celebrated.

If you’re an author or publisher looking to release literature in a different language, talk to our team about what you’d like to achieve. We will be able to put you in touch with the perfect linguist who’s ready to be your voice in their language.

3 thoughts on “The Challenges of Translating Literature”