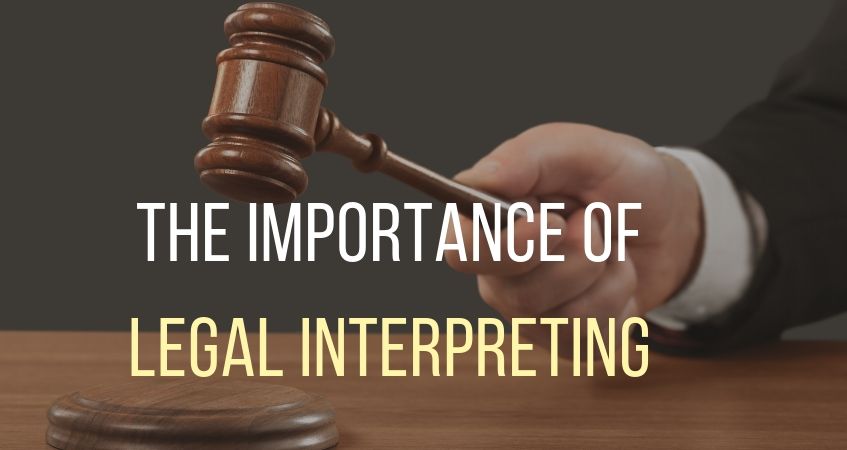 What is legal interpreting, and why does it matter? The goal of the legal system is supposed to be to uncover the truth. When the people involved can’t understand each other, the system breaks down. That’s why legal interpreting plays such a vital behind-the-scenes role in ensuring that justice is served.

To illustrate the importance of legal interpreting, let’s take a look at how it keeps the wheels of justice turning smoothly at each stage of the process.

First, what is legal interpreting?

Legal interpreting is a specialised type of interpreting that allows people who speak different languages to communicate in a legal or paralegal setting. This could include:

The importance of legal interpreting begins with making sure crimes are reported in the first place.   Language access (or the lack thereof) affects the ability of victims and witnesses to report crimes for investigation.

According to the Vera Institute of Justice,

Language barriers are associated with a number of adverse outcomes, including victimization. Immigrants, particularly those who are LEP and/or fearful of deportation, are at great risk of being targeted by criminals for various crimes because perpetrators know they cannot or will not seek out police protection.

For example, New York City is the most linguistically diverse city in the world. But according to the New York Times, crimes often go unreported when the police fail to obtain interpreting services for non-English-speaking victims.

This can lead to deadly consequences, as in the 2014 murder of Deisy Garcia and her children by her abusive husband.  In this case, Ms Garcia reported the abuse, but her report was simply taken in Spanish and left untranslated. No further action was taken until after the murders.

Deaf and hard-of-hearing individuals who prefer to communicate through sign language often face similar barriers to reporting crimes and abuse.  They, too, suffer from higher rates of victimisation as a result.

Legal interpreting is a vital part of criminal investigations when the people involved have limited English proficiency or communicate using sign language. Accurate legal interpreting allows investigators to gather evidence. It also reduces the chances of misunderstandings due to language barriers or cultural factors.

As you can imagine, the potential consequences of uncollected evidence or misinterpreted statements can be quite grave. For example, crimes may go unprosecuted. Innocent people may be prosecuted for crimes they didn’t commit, while the real criminals get off scot-free. Long, drawn-out investigations also waste limited police resources.

In the UK, the law requires access to legal interpreters for those who need them. According to the Code for Crown Prosecutors, “If a suspect or a witness requires an interpreter for an interview or the taking of a statement, the police must arrange for one to be present.”

Court interpreting: What is the role of an interpreter in court?

In court, legal interpreters assist both the prosecution and the accused to ensure a fair and just outcome.

Both English common law and the European Convention on Human Rights require that defendants in criminal cases be able to understand the charges against them so that they can mount a proper defence.

Court interpreters ensure that the accused can understand the charges and the resulting court proceedings. Under international law, even the most notorious war criminals are entitled to this right.  In fact, the now-common practice of simultaneous interpretation using microphones and headsets was introduced during the Nuremberg Trials to ensure that everyone could comprehend the proceedings. Even the Nazis.

In Wales, a Welsh-speaking prosecutor or a court interpreter may be required if the defendant or any witnesses wish to use the Welsh language in court – even if they speak and understand English, as well.

For example, cases proceed more efficiently through the justice system when interpreters are available as required.

A 2015 report from the University of Oxford found that in the UK,

“[C]ases in which the defendant requires an interpreter are regularly delayed and adjourned where the police or the court have failed to book an interpreter, or where the interpreter hasn’t attended court for reasons unknown.”

Indeed, according to the Ministry of Justice,  from 2011 to 2016, over 2,600 UK court cases had to be rescheduled because of interpreting failures. Each of those adjournments represents a waste of time and resources.

Secondly, concerns about the availability and quality of legal interpreting services can lead to convictions being overturned on appeal – even if the accused is guilty as charged.

What happens when access to legal interpreting is denied?

In a world of limited resources, legal interpreting can seem like a burden.  But it’s far from a luxury or an indulgence. When access is denied, the consequences can be dire. “Fair” trials turn into Kafkaesque experiences for the accused. Innocent people may be imprisoned or unfairly deported. Guilty people go free. Society becomes both less just and less safe, for everyone.

The importance of certified and professionally qualified interpreters

Legal interpreting is a specialised discipline.  Legal terminology and procedures vary greatly from country to country. That means that even people who speak both the source language and the target language fluently can have difficulty interpreting courtroom proceedings accurately.

In the United Kingdom, legal interpreters for criminal cases must be registered on the National Register of Public Service Interpreters (NRPSI).

But finding qualified interpreters can be difficult, especially on short notice.  Or at least, that’s how it used to be.

With over 30 years of experience and a vast network of high-quality interpreters, K International is your inside source for legal interpreting services.

We can connect you with specialist legal and courtroom interpreters in over 250 languages, including British Sign Language. We’ve worked with the clients like the Crown Prosecution Service, HM Revenue and Customers, the Ministry of Justice and a slate for international law firms.

Our system makes it simple and seamless to book qualified interpreters for court dates, client consultations and more.  Contact us today to get started!

This article will help you learn more about what interpreters do and why they’re important, better understand your options and choose an interpreting service that will help you achieve your organisational goals.

1 thought on “The Importance of Legal Interpreting”