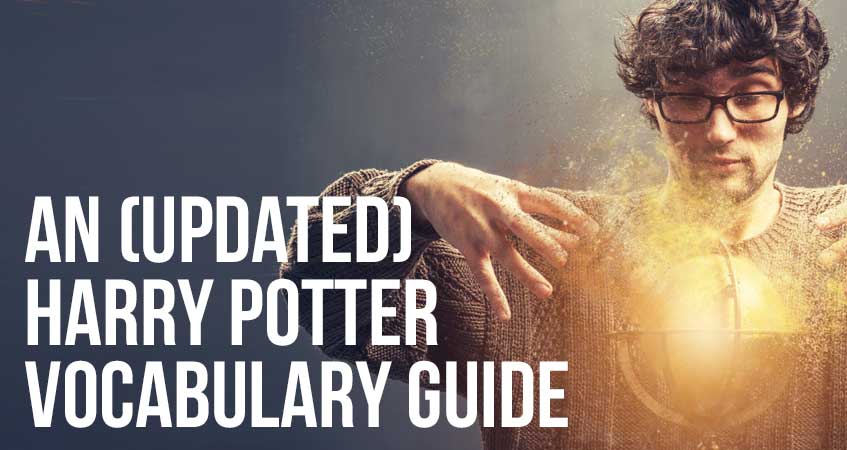 This year, Harry Potter fans are thankful for Fantastic Beasts and Where to Find Them. The new movie, released last week, gives fans a chance to revisit the wizarding world. But this time, the action happens on the other side of the pond, in  1920’s New York.

If you have friends who love Harry Potter, you might have noticed them lapsing into “Harry Potter-speak,” even in casual conversation. J.K. Rowling created a rich vocabulary for her fantasy world. But what if you don’t speak the language? What’s a muggle to do?

Read our Harry Potter vocabulary guide, of course! This handy glossary will make it easier to converse with your Hogwart’s-loving friends.

Animagus (plural: Animagi): Wizards who can transform into animals.

Auror: A magical detective who hunts dark witches and wizards.

Butterbeer: a favourite boozy drink of wizards, butterbeer is usually served warm and is described as tasting of butterscotch.

Muggles: normal, non-magical humans. This word has actually escaped the confines of Rowling’s fantasy universe and is now listed in the Oxford English Dictionary. According to LanguageRealm.com, Rowling claims the term is based on the insult “mug,” but it was first used as the name for a villain in a short story by Lewis Carroll, and was also used as slang for marijuana back in the ’20s.

Apparate/Disapparate: to “disapparate” is to disappear. After disapparating from a particular location, a wizard can then “apparate” somewhere else, no matter how far away. From the Latin “appareo,” to become visible.

Dumbledore’s Army: A group of students, led by Harry Potter, who learn Defence Against the Dark Arts Spells after Hogwarts is taken over by the sadistic Dolores Umbridge.

Floo powder: Magical powder that allows wizards to travel by disappearing in one fireplace and reappearing in another.

Marauder’s Map: A map that shows where everyone is in the Hogwarts castle. The map appears blank until it’s activated with the incantation “I do solemnly swear I am up to no good.”

Pensieve: A magical device for storing and viewing memories. A combination of the word “pensive” with “sieve.”

Gryffindor, Hufflepuff, Ravenclaw, and Slytherin: the four Houses of Hogwarts. New students at Hogwarts were assigned to a house based on their personal characteristics as determined by Sorting Hat.

Patronus: a protective spirit. Comes from the Latin for “protector.”

Platform nine and three-quarters: The subway platform where wizards board the train to Hogwart’s.

Quidditch: The wizarding world’s equivalent of soccer. Quidditch is played in the air, on broomsticks.

Death Eaters: a group of evil wizards, led by Voldemort.

Dementors: These creepy, emotional vampires guard the wizards’ prison at Azkaban. As a result, they terrify everyone they encounter.

The Dark Mark:  The Death Eater’s symbol, a skull with a serpent. All Death Eaters have the symbol branded on their left forearms and Lord Voldemort can also project it into the air like an evil version of the bat signal.

Horcrux: an object in which a wizard has hidden a portion of his soul in a bid to obtain immortality. This technique is what enabled Voldemort to come back from the dead. According to Mugglenet, the “hor”comes from the Latin word “horreum,” or storehouse, and the word roughly translates to “tormenting storehouse” or possibly “essence storehouse.”

Mudblood: An insulting way to refer to a witch or wizard with Muggle parents.

Parseltongue: The language of snakes.

Lord Voldemort: The leader of the Death Eaters, Voldemort is basically an evil wizard Hitler. The name comes from the French “Vole de mort” or “flight of death.”

Many of the spells used in the Harry Potter series were derived from Latin, though Rowling looked to other languages for inspiration as well. Here are some of the most important spells:

Avada Kedavra: This is Voldemort’s signature curse. It kills the target instantly.  Comes from the Arabic incantation “abra kadabra,” which means “may the thing be destroyed.”

Accio: A summoning spell; brings objects to you. Derived from Latin.

Crucio: a curse that inflicts severe pain on its target. Derived from the Latin for “to torture.”

Expelliarmus: a spell used to disarm a rival wizard, knocking the wand out of his or her hand. Derived from Latin.

Imperio: a mind-control curse. Derived from the Latin “Imperare,” to command.

Incendio: basically a fireball spell. Derived from the Latin “incendo,”which means to burn.

Morsmordre: the spell to summon the Dark Mark, which is like the Bat Signal for Death Eaters.  A combination of the Latin word for death (mors) with the French word for “to bite” (mordre).

Lumos: Makes a wizard’s wand light up. Nox turns it off.  Pro Tip: In the real world, “Lumos” also works on a voice command on most Android phones.

Words from Fantastic Beasts and Where to Find Them

Just as in the real world, wizards from the UK and the US are “divided by a common language.” So, before you head out to the movies, here are some wizarding words from across the pond:

Magizoology: The study of magical beasts.

No-Maj: The American word for muggle.

MACUSA: The American equivalent of the Ministry of Magic.

Memory Charm: A spell, activated by the incantation “Obliviate,” that erases memories.

Obscurus: A destructive force that possesses a young witch or wizard when they try to stifle their magical abilities.  Sort of like a poltergeist on steroids.

Occamy: A magical beast with bird-like and snake-like characteristics that lays silver eggs and can change size to fit its environment.

Niffler: If a platypus and a mole could mate, you’d probably end up with something that looks a niffler. These magical beasts love to dig and love shiny things. They are used for treasure-hunting.

Did we miss any of your favourite vocabulary words? Feel free to add them in the comments! Of course, if you need to understand Muggle-based languages, we’ve got the translation service for you!

Tags: Harry Potter Languages Latin movies
Previous Post Get the Best from Your Technical Language Partner
Next Post 7 Facts About Colors in Other Languages