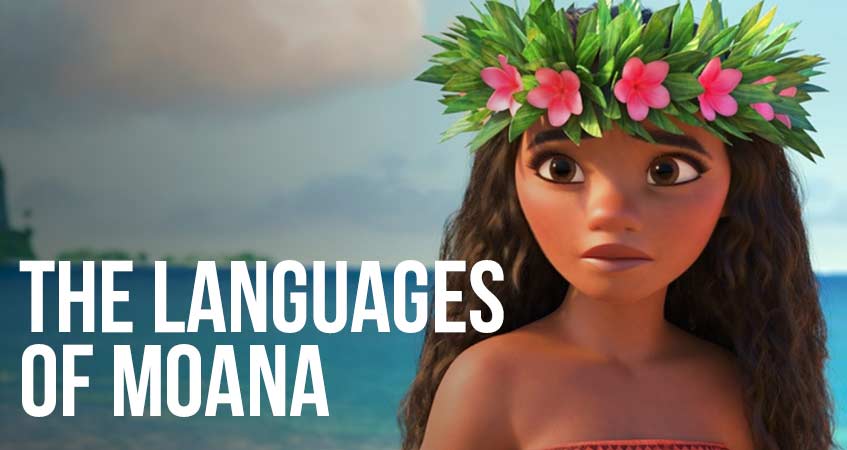 If (like me) you’ve got kids of a certain age, you’ve probably seen Disney’s Moana more than once. In fact, you can probably sing the soundtrack from memory, or at least the parts of it that are in English.

But what about the parts that aren’t? Have you ever wondered about the other languages used in the film? Have you ever been curious about the meaning of the song that you’ve had stuck in your head since the last time you saw the movie?  Here’s some background on the languages of Moana, along with some helpful translations.

The Languages in Moana

The English-language version of the film is primarily in English (obviously.) However, the character names are Polynesian:

The soundtrack showcases Polynesian languages more fully.  For example, “We Know the Way” includes lyrics in both Samoan and Tokelauan.

In an interview earlier this year in The Spinoff, composer Opetaia Foa’i explained why he chose those particular Polynesian languages:

“I know that the voyaging began in the Samoa, Tonga, Fiji area, so I knew that the first language to hit had to be Samoan. Because I mainly write in Tokelauan, it just came naturally that the chorus [of ‘We Know The Way’] would lift in Tokelauan. I did that intentionally because I knew that whatever they do in translating this movie to all other languages, they will never translate that.”

The Tokelauan language is spoken by less than 5,000 people in Tokelau, New Zealand, and Swains Island. UNESCO classifies it as “severely endangered.”

Have you been looking for a translation of the Samoan and Tokelauan lyrics in “We Know the Way?”

Here’s one direct from the source: Opetaia Foa’i’s website.

“We Know the Way” isn’t the only song in the movie with lyrics in Polynesian languages including Samoan, Tokelauan, and Tuvaluan.

The song that plays when the ocean tries to give baby Moana the heart of Te Fiti for the first time is called “An Innocent Warrior.” It’s based on an older song written by Opetaia Foa’i to honour 19 girls who died in a dormitory fire in Tuvalu. However, the lyrics were rewritten to make them relevant to the film.

You can find translations of both the original lyrics and the lyrics from the film here.

And what about that song that plays in the background while Moana helps Maui get his shapeshifting groove back? That’s “Logo Te Pate,” by Opetaia Foa’i’s band Te Vaka. You can find the lyrics in English on the band’s website.

How Moana is being translated into Polynesian languages

Moana is a film about Polynesian mythology and culture that was written in English by an American company and intended for a global audience. That has naturally raised some questions about cultural appropriation. This time, Disney has attempted to be more sensitive to those concerns. The company formed an “Oceanic Trust” of linguists, anthropologists, cultural experts, historians,  and others from various Pacific islands. Their job was to provide feedback on the film and keep Disney from making any unintentional cultural missteps.

That hasn’t managed to keep everyone happy. But one good thing they’re doing is to translate the film into smaller, local Pacific languages.

For example, a dubbed version was recently released in the Māori language, te reo Māori. Less than 150,000 people speak Maori. UNESCO lists it as “vulnerable.”

One common challenge with language preservation is making the language seem relevant and attractive to children.  Maori language advocates like  Haami Piripi, who used to lead a government effort to promote the language, hope that being able to see films like Moana in Maori will have an impact. Mr. Piripi told the New York Times that

“The language has got to be made cool and sexy and relevant to young people, and this movie is the perfect way to make that happen. . . There’s no other film in the Maori language that would attract whanau and kids like that,” he said, using the word for families.

Disney has also announced that Moana will become the first Disney movie to be translated into Tahitian. Tahitian has about  68,000 speakers in French Polynesia. Although it’s not endangered yet, some language advocates do worry about the future. And because most people on the islands speak French, most movies are simply released in French.

As Hinano Murphy, a cultural expert who was part of the Oceanic Trust, explained at a press conference:

“Native languages, like Tahitian, are being lost; it is important to find new ways to excite the communities, elders, young adults and children here [in Tahiti] about our language. Hopefully, this will also inspire other Polynesian islanders to find innovative ways to teach their languages. We hope this version will be used as a teaching tool for many decades into the future.”

Disney has also started casting for a Hawaiian-language version of the film. Hawaiian has  around 24,000 native speakers, but UNESCO still lists it as “critically endangered.”

Even though Moana was inspired by Polynesian mythology, some scenes still had to be tweaked for the Maori version. According to the New York Times,

Some moments of the film posed a challenge; Moana raging at the ocean, for example, contravened a Maori cultural rule to never curse or turn one’s back on the sea, so they turned it into a more humorous moment using careful wordplay.

This is an excellent example of why localization requires the assistance of native-speaking translators who are familiar with the cultural and linguistic variations for the languages you’re targeting. If you’re looking for reliable translation and localisation services, our team will be glad to help.

12 thoughts on “The Languages of Moana ”