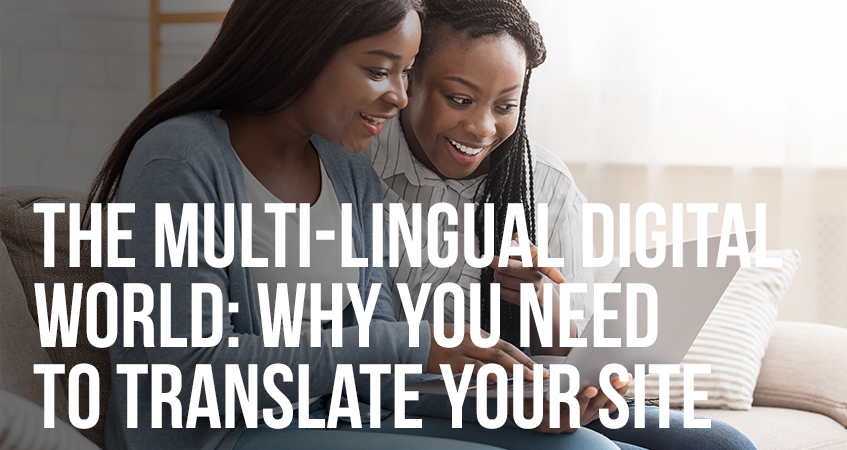 The internet is an incredibly powerful tool for businesses. Since it first became available to the public in the late 1980s, it’s transformed the commercial landscape, allowing companies to easily market their products to consumers all over the world.

However, while the internet started out as an almost entirely English-language based resource, the volume of foreign language content, as well as foreign language users, has dramatically increased.

And with around 42% of consumers saying they would never purchase products or services in other languages, targeting these users, in their own tongue, clearly makes sense for businesses.

Here’s why you need to translate your site to compete in the global marketplace.

In 1997, early research into linguistic diversity online by Gregory Grefenstette & Julien Nioche estimated that around 80% of online content was in English.

Although this was largely because the vast majority of internet users were, at that time, English speakers, it led many critics to suggest that other languages would have a hard time catching up. Quite simply, it was believed that international users would simply adapt to consuming English language content.

However, what’s actually happened is very different. According to The World Bank, 80% of the web’s content is now in one of 10 languages: English, Chinese, Spanish, Japanese, Portuguese, German, Arabic, French, Russian and Korean. And while this means that the vast majority of languages are still woefully under-represented, it does show that the linguistic shape of the online world has come a long way.

Despite this, the belief that English is hugely dominant online has lingered – in part because it’s very difficult to generate accurate statistics about language use online, with sites that have huge numbers of users, such as Facebook (reached by a single IP address), potentially skewing the results.

More recent research, using the most up-to-date techniques, however, supports the idea that the web is becoming increasingly multilingual. In a 2013 article by Quartz, Álvaro Blanco, a researcher at non-profit organisation, UNREDES (Foundation for Networks and Development), stated that: “My personal opinion is that English now represents less than 40% of online content.”

Despite these changes in the use of languages online, the fact that English is regarded  as the ‘language of global business’ and learned by people all over the world, means that there is a prevailing attitude amongst some companies that content in English is ‘good enough’.

However, you only have to read some of the research in this area to realise that this isn’t the case. For example, in a Gallup study of user language preferences online, it was found that whilst 48% of European Union internet users used English to read and watch content online, 42% said they would never purchase products in a language other than their own.

The message is clear: regardless of the fact that many international consumers can read and understand English, it doesn’t mean that they’ll buy from a site that doesn’t provide information in their native tongue.

What does it mean for your business?

For ecommerce sites to compete in today’s global market place, outstanding website translation, localised for each of your international audiences is essential. Ultimately, if you don’t speak to your customers in their language, you run the risk of them buying from a competitor that will.

However, adapting digital content for an overseas audience is a complex process. From colloquialisms to local humour, language can vary hugely by region, let alone country.

Here at K International, we can help you with every aspect of the website translation process, as well as offering specialist advice on legal, cultural and procedural issues.

To find out more about the languages with the highest numbers of online users, view our interactive resource ‘In Which Languages Do Today’s Businesses Need to Be Fluent? A Visualisation of the World’s Most Influential Languages’.

You can also find out more about adapting digital content for an international audience in our free eBook, ‘Digital Content Guide to International Business Expansion’.

Your product label is the first thing potential customers see when they walk past your product in a store or browse your online shop. Unless they’re already familiar with your brand, the only information they have to make them want to purchase your product is the information on your package. Make sure its correct.