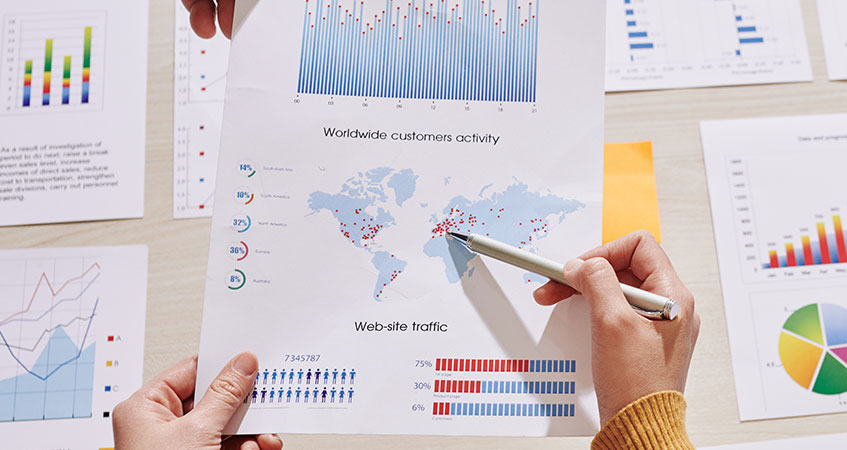 For decades, the online world was mostly English-speaking. But that’s changing.  More than one million new internet users are added each day, and many of them speak English as a second language or not at all. As a result, we’re rapidly moving from an “English-first” internet to a more diverse multilingual web.

This will create new challenges and new opportunities for businesses of all sorts. Here are 6 facts about the multilingual to keep you from getting left behind.

The top ten languages online are quite different from the top languages spoken around the world.

For example, here are the most spoken languages in the world, by number of native speakers:

Now, here are the top languages for online content, as measured by the percentage of websites in each language, according to w3techs:

As you can see, while there is some overlap between these two lists, some of the most widely spoken languages in the physical world, like Chinese, Bengali and Punjabi, are relatively scarce online.

English is (still) the most common language online, but other languages are gaining ground.

As noted above, around 60% of websites are in English.  Meanwhile, considering all types of online content (not just websites), English is estimated to make up between 30% and 52.9% of the internet.

Why is so much of the internet still in English? It’s a legacy from the early Internet days. When the World Wide Web was invented in the 1990s, most users were in the United States, Canada, the UK and European countries where English is commonly spoken as a second language.  That’s given English what the startup world calls “a first-mover advantage.”

But that’s likely to change, as the more and more of the world comes online. The percentage of English-language content is already dropping as diverse internet users demand more content in their native languages, and there’s no going back.

The bottom line?  While English currently dominates the internet, there is an unmet demand for content in other languages, and that demand will only grow as more people in more places gain access.

The fastest-growing online language is Arabic.

China has the second-highest highest number of internet users, but only 1.8% of online content is written in Chinese.

Despite these statistics, less than 2% of websites are available in Chinese.  That’s about the same percentage as Persian (2.0%) or Polish (1.7%)!

There’s no question that, everything else being equal, most people prefer to browse and shop in their native languages. If you’re marketing to Chinese consumers, a well-though-out translation and localisation strategy is one way to put your business ahead of your competitors.

Your site can reach over 75% of the world’s internet users with just 10 languages.

There are around 6,500 languages spoken across the globe today. (Amongst linguists, the exact number is a matter of debate.)

But don’t panic- there’s no need to translate your website into that many languages! In fact,  you can make your site accessible to over 75% of internet users with just the following 10 languages:

What do these languages have in common? They are all widely spoken in countries that have gotten online relatively recently, or that are still in the process of doing so.

For example, Portuguese is the language of Brazil. With around 212M people, Brazil is the 6th most populous country in the world. But as of 2020, only 65% of the population was able to access the internet. We can expect millions of additional Portuguese speakers to come online in the years to come, as internet access expands.

Spanish, too, is one of the top languages in terms of native speakers, but internet penetration rates range between 61-71% in Central and South America.

In Russia, meanwhile, about 80% of the population has access to the internet. However, much of that growth has taken place just in the past decade. So, when it comes to the opportunity represented by Russian consumers, online content and international eCommerce are still playing catch-up.

China, meanwhile, has added 75M internet users from 2018-2020. But the country has an overall internet penetration rate of 64.5 percent, so there’s lots of growth still to come.

The growth of the multilingual web represents a tremendous advantage for savvy businesses. English-only is no longer enough, but by investing in translation and localisation now, you can get ahead of the competition.

But it’s important to take the time and do it right.  Looking for shortcuts and treating localisation as an afterthought can lead to translation errors, cultural blunders, and can give customers the impression that you don’t value their business.

Our team of linguists, designers and consultants are at your service, ready to get your business online in the languages your customers speak.

Connecting with a global audience means your website must be both appealing and understandable to that audience. Invariably this means that the content you publish online must cater to multiple regional audiences to be successful. This process is called Website Localisation and we explain it here.

The Difference Between Translation and Localisation

What’s the difference between translation and localisation, anyway? If you’re dipping your toes into the world of cross-border trade or international e-commerce, you’ve probably heard those words thrown around quite a bit. And you might think they’re interchangeable. But they aren’t. Here’s the difference, in a nutshell: Translation applies to content, localization applies to everything […]