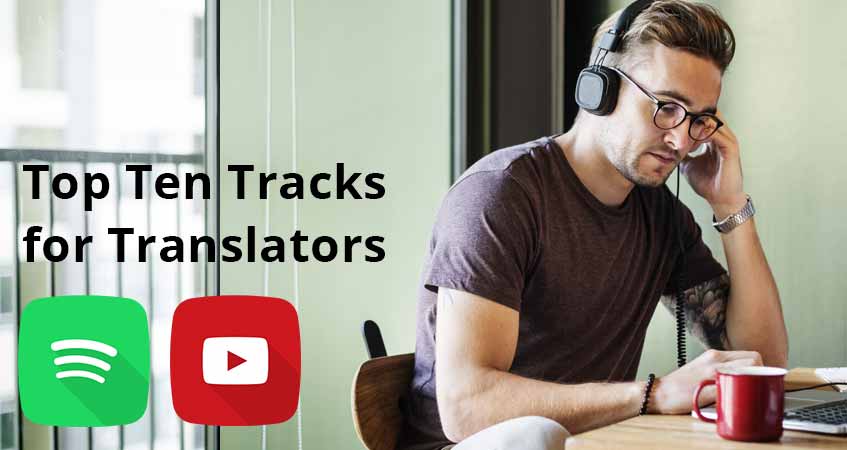 You love languages, you love music, here are your top ten tracks voted for by the team at K International.

Nothing to do with translation but I love this song and remember the first time hearing it in the original German. Written at the height of the Cold War when Germany was divided by the Berlin Wall the song is an imaginary story of how 99 red balloons were released, detected on radar and then war breaks out.

The B side to The Lovecats this was released in October 1983. The Cure were formed in 1978 and are still touring, headlining Glastonbury in 2019.

#8. We No Speak Americano – Yolanda Be Cool Vrs DCup

From Australian band Yolanda Be Cool (and producer DCUP). Released on 27 February 2010 the song samples the 1956 Italian (though sung in the Neapolitan language) song “Tu Vuò Fà L’Americano” by Renato Carosone. And who could forget Neil dancing to this in the Inbetweeners movie?

#7. The One AM Radio – I Didn’t Speak The Language

The One AM Radio is a band consisting of composer and blogger Hrishikesh Hirway. Their sound is often characterised by Hirway’s lush vocals over dream-like instrumental arrangements.

#6. Laurie Anderson – Language is a Virus From Outer Space

Laurie Anderson is an American performance artist and composer. Her work has incorporated graphics, lighting, sculpture, mime, slides, film, speech, music and many electronics, some of her own design. This is from her 4-disc live album. Later re-recorded as Language is a Virus on the 1986 album and concert film Home of the Brave.

Nipsey Hu$$le was an American rapper, entrepreneur, and community activist from LA. Born out of the West Coast hip hop scene in the mid-2000s, Hu$$le independently released his first mixtape, Slauson Boy Volume 1 to local success. He was shot and killed outside his store Marathon Clothing on April 2nd 2019.

#4. Morphine – You Speak my Language

Morphine is an alternative rock band based out of Cambridge, Massachusetts. The band was formed by Mark Sandman. This track is taken from the album Good.

Australian electronic producer duo that also performs as Hugo & Jimmy. In 2009, they began mixing songs by other artists before crafting their own original material. In 2011 this song won a J-Award for the music video and appeared as number 72 in the Triple J Hottest 100, 2011.

From British reggae singer Smiley Culture (aka David Victor Emmanuel) produced two of the most critically acclaimed reggae songs of the 80s.

New Zealand comedy duo Bret McKenzie and Jemaine Clement are the Flight of the Conchords. This song is taken from their hilarious TV series of the same name.

We put all these and a few others on a translator Spotify playlist. Feel free to contribute to it. Enjoy.

1 March was St. David’s Day in Wales. This day is the feast of St. David, the patron saint of Wales. However, it’s also traditionally a celebration of Welsh language and Welsh culture.  With that in mind, here are six facts about Welsh translation organisations need to know. Over 700,000 Welsh speakers live in the […]

0 thoughts on “The Top Ten Tracks for Translators”