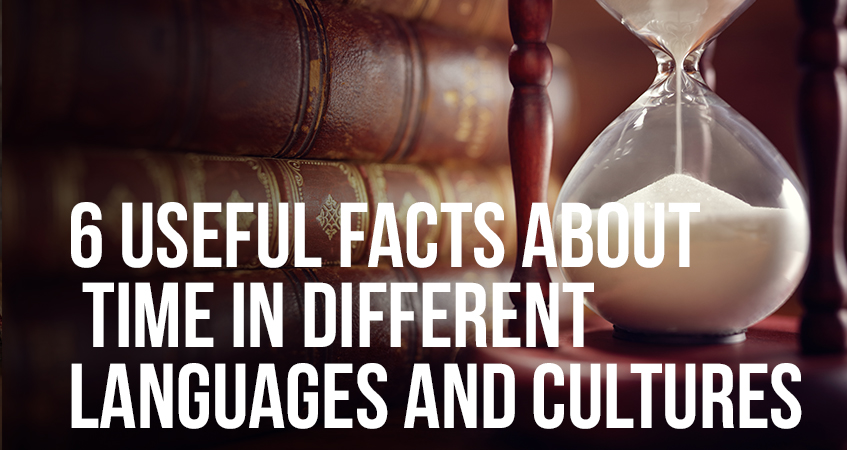 Time should be easy to translate, right? Wrong! The passage of time is universal and inevitable, but the way different cultures experience it is not. And that can lead to confusion, especially when you’re travelling, or when you’re trying to socialize or do business with someone from a culture that treats time differently than your own.

With that in mind, here are  6 useful facts about time in different languages and cultures.

Most Western cultures are monochronic. Here’s what that means and why it matters.

Social scientists classify cultures are “monochronic” or “polychronic” based on how they view time.  Monochronic cultures see time as a limited resource, something that can be “saved,” “spent” or “wasted.” In a monochronic culture (like the US or the UK), it’s normal to schedule tasks and appointments to start and end at a certain time.

But in a polychronic culture, time is seen as flexible. And that means that appointments and deadlines may be more flexible as well. In polychronic cultures, it’s also more common to do many things at a once. Interruptions are regarded as normal instead of undesirable.

(One caveat: These are just generalizations. They aren’t universal. Japanese culture is generally regarded as polychronic, but the culture is also quite fast-paced and punctuality is important).

Monochronic cultures also tend to see time as a “line,” stretching forward into the future and backwards into the past.

But that’s not universal. In some cultures, particularly Asian cultures and some Native American cultures, it’s a wheel, moving in reoccurring cycles. On a practical level, that means they may need to carefully consider past events before making decisions for the future.

And of course, if you’re a Time Lord, it’s a big ball of wibbley-wobbly, timey-wimey stuff that you can travel through.

Language changes your perception of time

Interestingly, the language you speak actually changes how you perceive time. For example, English speakers tend to think of time as distance. We say “what a long day” when we’re working overtime, for example. Swedish is the same way. But other languages, like Spanish and Greek, refer to days as “full” instead of “long.” It’s as if time were a container.

So how does that affect our perception of time? In a study published this year in the Journal of Experimental Psychology, researchers designed an experiment to find out.

They showed groups of Swedish and Spanish speakers a series of animations. The first set showed lines of different lengths growing across the screen. All the animations were 3 seconds long, but the test subjects weren’t told that. They were simply asked to estimate how much time had passed for each one.

And the results? See for yourself:

While Spanish speakers knew that three seconds had passed regardless of how quickly the line grew, Swedish speakers tended to think that more time had passed when the line was longer at the end of it. There are limits to this: it’s not as if a Swede would think ages had passed if a line grew super long in just three seconds. But in the mid-time conditions Bylun outlined, they struggled.

But when the animations showed a container filling up with liquid instead of a line, the reverse was true. Spanish speakers had difficulty estimating the time, while the Swedish were more accurate.

Meanwhile, the same experiment showed that for bilingual people, their perception of time changed depending on the language the instructions were given in.

So, if you’re bilingual, you may be able to change how you perceive time by changing the language you think in.  That’s a nifty superpower to have!

Life moves faster in some countries than others.

Cultural differences in the way people perceive time have a tremendous effect on the way people live their lives. It affects everything from how fast we walk to how predictably we can get from point A to point B.

So which countries are the fastest? Researcher Dr Robert Levine compared the pace of life in 31 countries, measuring variables like walking speed, how quickly people work and how accurate the public clocks were. According to his assessment, Switzerland, Ireland, Germany, Japan, and Italy were the fastest countries.  The slowest were Syria, El Salvador, Brazil, Indonesia, and Mexico.

Time in different languages and cultures can be tricky to translate.

As a result of all of these different perceptions of time, the way we speak about time can be more difficult to translate than it would seem at first glance. For example, in his book “A Geography of Time,” Dr Levine tells the story of a businessman in Russia who was late to an appointment:

His guide began shouting to their cab driver a Russian phrase (Pah yeh kaly) meaning “Get there yesterday” or literally, “Let’s went.” His guide advised him that the literal translations of words like “hurry” and “rush” simply do not carry the urgency in Russian that they do in English. If he had merely ordered the driver to “Get there as soon as you can,” Button was told, he would have arrived even later than he did.

Meanwhile, pity the poor vacationing BBC reporter who asked a Mexican ice cream vendor when he would be getting more ice cream in. “Ahorita,” she was assured, again and again, until she finally left to avoid an oncoming thunderstorm.

Directly translated, ahorita should mean “right now.” But in Mexico, it rarely does.

This is just one of many examples that show why translation is more than simply swapping one word for another.  Qualified translators have the linguistic and cultural knowledge to ensure that your message gets through as intended.

Want to communicate seamlessly with customers and business partners all around the world? We can help! Check out our language and translation services and give us a call. We’d love to hear from you!