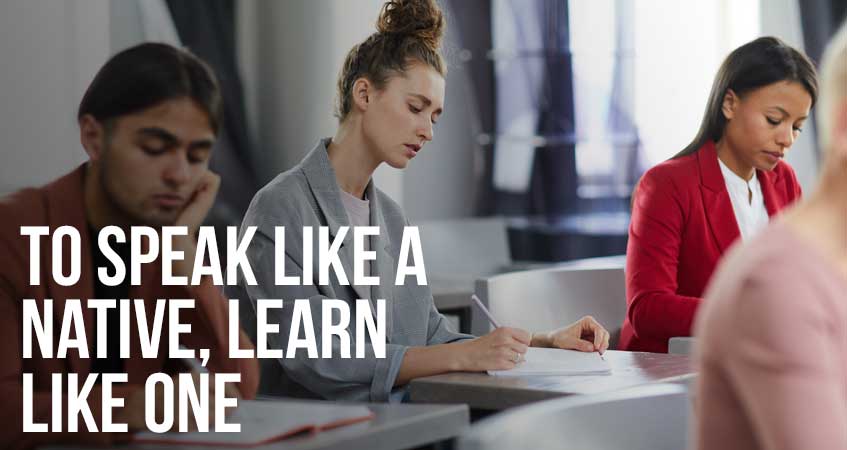 Want to speak a new language like a native? Your best bet may be to forgo classroom lessons in favour of immersion (if possible). That, at least, is the conclusion that a group of researchers from Georgetown University Medical Center came to after reviewing results from a recent study that used brain scans to peek into the heads of language learners.

If you’ve studied a foreign language, you might remember being told to try to think in the new language rather than to think in English and then translate. This is still good advice, and the study shows that is definitely possible for students to begin “thinking” in the new language. Georgetown University Medical Center neuroscience professor Michael Ullman explains:

“In the last few years, research has begun to suggest that adults learning a foreign language can come to rely on the same brain mechanisms as native speakers of a language, and that this might be true even for those parts of a foreign language that are particularly difficult to learn, such as its grammar. We confirmed this in our studies.”

When it comes to foreign languages, do we learn best by explanation or by example? You might think that an explanation of the language’s underlying grammatical structure would be helpful, but this study implied it’s not so. To test, the researchers created a very simple language and taught it to the students both ways. Then, they scanned the subjects’ brains while they used their new language skills. According to Ullman,

“Only the immersion training led to full native-like brain processing of grammar. So if you learn a language you can come to use native language brain processes, but you may need immersion rather than classroom exposure.”

The researchers also found that the people taught in a classroom setting got better at “thinking like a native speaker” after a few months, even though they hadn’t been using the language. Still, those who learned the language via immersion still had an edge.