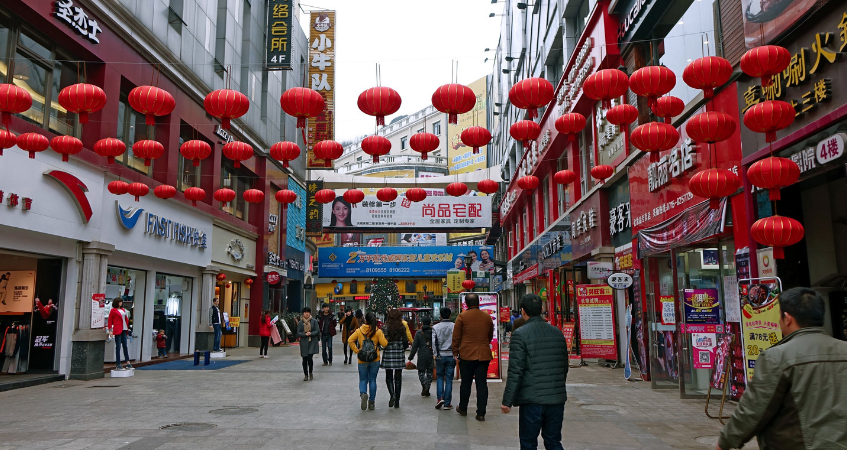 When it comes to cultural and linguistic differences, few regions stand as far apart as China and the Western world – the US in particular. One is a communist state that prioritises cooperation and collectivism, the other a democracy that sees itself as a paragon of meritocracy. While both may fall short of their ideals (which country in this world can truly live up to its values across all parts of its society?), this does not change the vast differences between their fundamental principles.

When it comes to population size, China dwarfs the US, with 1.38 billion citizens, versus just 326 million in the US. Nevertheless, the US reigns supreme when it comes to GDP – at least for the moment. The US economy is worth $18.5 trillion, accounting for 24.5% of gross world product. China has the second-largest global economy, at $11.3 trillion.

Linguistically, too, China and the West are very different. Mandarin, is a tonal, analytic language that uses a subject-verb-object word order and topic-prominent organisation. It is written using logograms known as hànzì. The English language, on the other hand, is a Germanic language that uses a Latin script, modal verbs and the palatalisation of consonants, though it does share the subject-verb-object order of Mandarin.

Despite the many cultural and linguistic differences, China and the West have a long trading history. The Portuguese were some of the first sailors to successfully establish trade with China, gaining territorial rights at Macao in 1557 and swiftly opening up trading posts at Ningpo, Foochow, and Amoy. It took Britain until 1596 to attempt to follow suit, but efforts were unsuccessful until 1637 when the East India Company reached Canton and opened trade negotiations. Trade between China and the US commenced in 1784, when the US ship Empress of China sailed from New York to the Pearl River Delta, looking to trade cloth, pepper and ginseng for tea, silk and spice.

We can only imagine the communication difficulties faced by those early traders. While the Silk Road has enabled goods to flow from East to West (and vice versa) for centuries, the widespread use of commercial ships heralded a new era for trade between the two regions. While pointing and gesturing may have sufficed for those early, pioneering traders, the need for translators quickly grew. Today, professional business translation has a key role in the trading of goods between East and West.

The role of translation

Several types of translation are essential when it comes to successful cross-border trading. Marketing translation and transcreation help brands to communicate information about the benefits of their products to their international audiences. Regulatory translation of product information ensures that legal requirements are complied with and that products are shipped alongside the correct information, in the right language. Financial translation supports the brokering of deals between manufacturers, suppliers and delivery companies. Broader requirements can also include the translation of business emails, letters and legal agreements between trading partners.

Companies that invest in the right kinds of translation at the right stage of the process have an advantage over those that don’t. Success is never guaranteed when a company seeks to export its brand to new audiences, particularly when potential customers have a very different cultural background. In this situation, high-quality marketing translation and transcreation can make all the difference.

Marketing translation involves translating and localising copy. Transcreation goes a step further – it looks to deliver the same brand impact but in another region, this can involve changing product names, logos, straplines, imagery, copy and more. It is, in essence, a more holistic creative approach to delivering marketing messages to new audiences.

Despite the easy access to translation services that modern companies enjoy, overcoming linguistic and cultural barriers can still be difficult for Western companies that are looking to crack the East, just as they can be for Eastern companies looking to make it big in the West. Thus there is still plenty to learn from companies that have successfully managed to do so on each side.

Huawei is one of China’s biggest success stories right now when it comes to taking advantage of globalisation. Huawei made its name manufacturing cheap electronics – originally phone switches back in 1987. However, the firm now has its sights set firmly on the global smartphone market. The company has been particularly successful in Europe, where improved products and a new brand image have helped it to flourish.

Huawei’s European success story demonstrates the value of decent marketing transcreation. The company swapped selling cheap, unbranded products for selling higher quality, branded products and building a whole new image. European buyers have responded particularly well to Huawei’s approach, helping the company to rise to an 8.3% share of the smartphone market. Only Apple and Samsung are now ahead of Huawei when it comes to smartphone sales. The lesson in employing transcreated advertising to speak to new audiences is crystal clear.

Another successful Chinese technology company is Lenovo. For years the company trailed HP when it came to computer sales, but in 2013 it overtook its rival to become the largest personal computer vendor in the world (Thanks in part due to its acquisition of IBM’s PC division). Lenovo Asia-Pacific spokesperson Derrick Koh recognised the role that strong branding and a diverse global team played in the company’s success:

“The main factors were a combination of a clear strategy, strong branding, innovative products, robust channel partnerships, commitment to execution and being part of a diverse global team.”

Being a multinational with its roots in globalisation, Lenovo was able to leverage marketing expertise from around the world in order to present its brand in a way that would appeal to customers way beyond China’s borders. Clearly, the approach has worked.

Achieving credibility in Western markets is far from easy for many Chinese brands. A surprising number of huge Chinese companies assume that success in their homeland will easily translate to success overseas. Take Tencent, the Internet and messaging business behind WeChat, as an example. The company has Western markets firmly in its sights and has significant spending power – with a value of $85 billion, it’s worth more than Coca-Cola. However, many Westerners are completely oblivious to its existence.

The number one reason for the failure of Chinese brands in the US, according to Forbes, is their tendency to focus on a Chinese audience, instead of an American one. The time taken to crack Western markets is also often misunderstood, particularly by brands that have achieved so much in such a short time in China.

Chinese brands also have to break through the scepticism they face in Western markets. A lack of trust in the quality of Chinese products (versus Western-made products) means that many Chinese brands have a tough start. There’s also a cultural difference when it comes to making mistakes. A misstep that might quickly be overlooked in China can be a real brand-killer for overseas markets. Despite this, companies like Huawei are proving that with high-quality products and a strong brand, this issue can be overcome – it just takes time.

One of the biggest success stories when it comes to a Western brand making a name for itself in China has to be Louis Vuitton. The French company has established itself as the leading brand for Chinese buyers when it comes to luxury fashion items.

An innovative luggage manufacturer dating back to 1854, Louis Vuitton’s chequered and monogrammed canvases became known around the world. Interestingly, Asian buyers became more enamoured with the brand than its home audience in France did. In Japan, for example, the penetration rate of Louis Vuitton bags reached a staggering 40%, compared with just 2% in France.

Appropriate marketing, transcreated and targeted directly at Chinese buyers, has further helped Louis Vuitton’s cause. The company has targeted glamorous magazines and used leading Chinese celebrities in its adverts, such as actress, singer and television producer Fan Bingbing. Localised advertising campaigns of this nature work wonders when reaching out to the brand’s target audience – Louis Vuitton is an excellent example of how to get it right when selling a Western brand in the East.

The rise of a new, spend-happy generation of students and young professionals (spend-happy compared to their parents and grandparents, at least) has created additional opportunities for Western brands in China. The 2016 RTG Brand Relevance Report found that the brands considered to be most relevant to Gen-Y Chinese shoppers were Apple, WeChat, Alipay, Taobao, Adidas and Zara. For Gen-Z shoppers, the most relevant brands were Xiaomi, Adidas, Nike, Uniqlo, Zara and Converse. RTG reported that many of these brands are now considered indispensable by Chinese consumers.

Not all brands have succeeded in penetrating the Chinese market, though. Tesco, having conquered much of the world already, opened its first Chinese store in 2004 with Chinese hypermarket chain Hymall. It opened its first Tesco-branded store in 2007. However, the supermarket failed to engage Chinese shoppers and reported losses year after year. Tesco tried to localize, selling live turtles and toads in its Shanghai store in order to appeal to Chinese buyers, but its brand simply did not resonate with Chinese consumers.

Kunal Kothari, the equity analyst at Old Mutual Global Investors, points to a lack of understanding of local customs as a key part of Tesco’s failure in China:

“Tesco attempted to replicate its tried-and-tested UK hypermarket model by rolling out massive stores very quickly and hoped that its Clubcard would prove to be a competitive advantage again as it had been in the UK.”

“This was not the case as Chinese consumers prefer to shop around and often carry multiple store cards. This misunderstanding of the market doomed the economics of these large stores from the outset.”

If ever there was a lesson in the value of localisation, this is surely it!

Localisation at its best – West to East

Energy drink Redbull certainly took this lesson on board. At the heart of its advertising strategy in China was the desire to connect with the individual cultural values of its target audience (professional, urban Chinese males aged 18-34). The firm undertook an analysis of detailed cultural dimensions, including power distance, individualism, masculinity, uncertainty avoidance and long-term orientation, as well as a wide range of other factors. The brand’s colours were changed to suit local buyers (Redbull in China comes in golden cans with stylised red bulls and black writing) and advertising campaigns were built to suit local tastes. Even the product was adjusted to suit local tastes – Redbull in China is not carbonated.

The result of all this effort was that, by 2015, Redbull had become the leading energy drink brand in China. While Redbull has a 30.2% share of the global energy drink market, in China its market share stands at around 80%.

Brands looking to capitalise on globalisation and sell their wares to new audiences overseas can learn many lessons from the high-profile successes – and failures – of these leading companies. What shines through most strongly is the need to present the brand in a way that local audiences will engage with. Marketing transcreation is an essential tool for any brand wishing to succeed in a new culture. It gives companies the ability to speak directly to local audiences around the world, delivering their messages in a way that will be understood and appreciated. With such vast markets to explore, brands simply cannot afford to make cultural faux pas any longer.