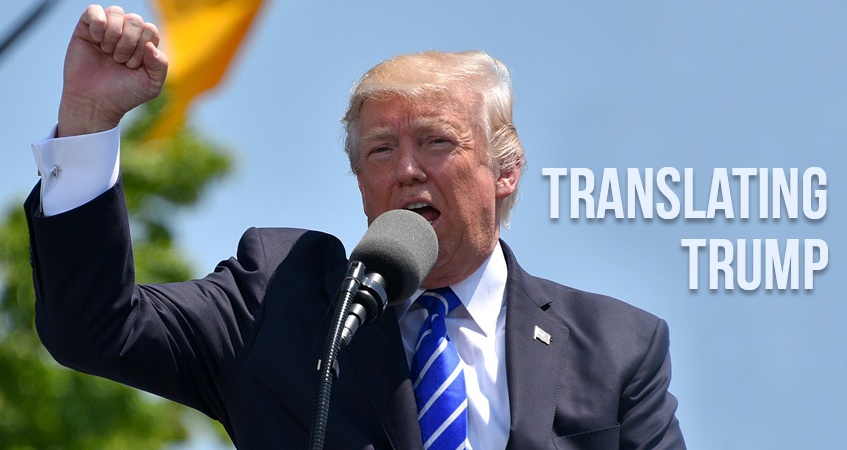 Once again, the President of the United States is making translators’ lives difficult. Last week, they faced a new dilemma – how to translate President Trump’s preferred epithet for certain developing countries.

Even American newscasters had problems figuring out how to handle the profanity. But news organizations in other countries had an even bigger problem on their hands. How do you translate what President Trump allegedly said accurately in a language that doesn’t have a direct equivalent? And how do you balance accuracy in translation with differing levels of cultural acceptance of profanity?

After all, cursing is cultural. At one point in time in English, nobody would have batted an eye at the words President Trump used. Conversely, in some cultures, swearing of any sort is not as acceptable in public as it’s become in the United States.

With that said, it’s interesting to see how the foreign press represented Trump’s comments to their audiences. Also, when translated word-for-word back into English, some of these are just too funny not to share.

If you’ve ever wanted to insult someone else’s home country, here’s how to do it in 10 languages:

Japanese: Depending on the news source, Japanese viewers got one of the following:

China: The Chinese press went with fenkeng, which means “cesspit,” or “lan guo,” countries that suck.  The latter sounds like something Beavis and Butthead would say, but perhaps that was the point.

South Korea: One outlet used 거지소굴, which means “beggars’ haunts.” Others simply spelled the offending word out in English.

Croatian:  Newspapers in Croatia used vukojebina, a vulgar word which means both “the middle of nowhere” and “place where wolves copulate.” I suppose that’s because wolves require privacy?

Czech:  News sources in the Czech Republic translated it as prdele světa, a more vulgar version of “anus of the world.”

Spanish: In Spain, the press tended to use “paises de mierda,” which means “countries of sh**”. But in El Salvador, one of the countries Trump singled out, the insult was translated almost word-for-word as “agujeros de mierda.”

French: Some outlets used pays de merde, which means “countries of excrement” but preserves President Trump’s original profanity. Others, including the Haitian newspaper  Le Nouvelliste, used trou a merde, which is a direct translation of the President’s insult.

Why is this so hard to translate?

According to the Strong Language blog, the word in question has been around since at least the 1600’s. (A warning: If strong language offends you, please don’t follow the link. Obviously.) Back then, it was used to refer to what the dictionary describes as “the opening at the end of the alimentary canal through which solid waste matter leaves the body.”

The alternate meaning, “an extremely dirty, shabby, or otherwise unpleasant place” with few amenities and poor infrastructure, didn’t evolve until the 1930s.

But the word still carries traces of its original definition. So now, there’s a bit of a double meaning that doesn’t necessarily come across in another language.

As Juliane House, the former president of the International Association for Translation and Intercultural Studies, explained to the Washington Post, Trump’s epithet might sound like it would be simple to translate, but the devil is in the details:

“Most languages have some equivalent for the first part of the combination — or at least some profane variation of a word for excrement. “It’s a bodily function,” said House, who is a professor at the University of Hamburg.

Hole, by itself, is also easy enough.

But what happens when you put those two words together? Is it an adjective or a noun? And how does one use it in a sentence to describe certain countries?”

Profanity in other countries and cultures

When teenagers (and teenagers at heart) take a foreign language class, one of the first things they usually do is find their dictionary and look up all the swear words they know. And yet, translating profanity is often more difficult than simply looking up an equivalent word in the dictionary. A mild swear word in one language could be highly offensive in another.

Or a word that seems utterly innocuous in one language could be a top offender in another, like “chalice” or “host” in French Quebec.

For more, see Taboo Language from Around the World.

There’s certainly room for debate about how much to censor the crudeness and profanity from a powerful politician like President Trump. People may get offended. But that’s because what he (allegedly) said was offensive, and not just because he used a “dirty word.”

However, when it comes to business content, you want to avoid offending your audience unintentionally. Or making a dirty joke out of your product packaging.

So, choose an experienced, professional translation company. At K International, our translators use their linguistic and cultural knowledge to make sure your message comes through clearly in any language!