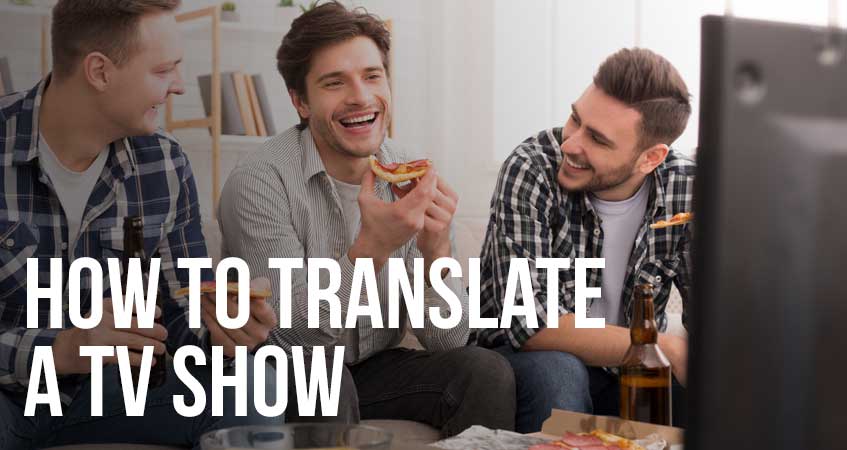 Translating a TV show is harder than it looks. A good show has to resonate with viewers. The challenge is making that happen across different languages and cultures. Like other types of translation, translating TV shows involves a series of tough choices.

There are three possibilities for translating a TV show. You can translate the dialogue into the target language as subtitles, you can use voice actors to dub the translation over the original film, or you can remake the show completely. There are advantages and disadvantages to each option. Remaking the show provides more flexibility in rendering dialogue, plus you can completely localise the show for the target region. Sometimes, significant changes need to be made to keep the show in line with cultural standards.

For example, in the Iranian remake of Modern Family,  gay couple Mitchell and Cameron were replaced with straight characters.  The teenage girl character was changed to a teenage boy, and dating-related plotlines were changed or scrapped to reflect the fact that dating is taboo in Iran. (Via Dorkly)

Localisation is sometimes done even when the target market speaks the same language as the original show. For example, the UK version of Law and Order substitutes familiar vocabulary, laws and legal procedures to better appeal to British audiences.

Naturally, filming a remake from scratch is also the most expensive option.

Now for the great “dubbing vs. subtitles” debate. It’s easier to watch a well-dubbed show since you don’t have to focus on reading subtitles. However, dubbing is more costly. You not only have to pay for translation, but you also have to hire voice actors. Plus, the translation is trickier because the translated dialogue needs to match up with the mouth movements of the characters on screen.

Cost isn’t the only factor, though. The bottom line is that some countries prefer their foreign media subtitled, while others prefer dubbing.

TV show titles are generally short, pithy and surprisingly hard to translate. Pajiba.com has a long list of amusing examples of TV show titles that got scrambled somewhere in the translation process. Here are some of our favourites:

Is it necessary to rename characters? Not always, but it’s a nice touch that helps local viewers identify with the show. Translated names may be straightforward, like “Walter Blanco” for Breaking Bad’s “Walter White.”  Or, the translator might just change from one language’s version of a name to another,  like changing “John” to “Juan.” Other times, translators look for a name that has the same “feel” as the original, or that starts with the same letter or has some of the same sounds.

For example, in the Arabic version of The Simpsons, “Homer” is  “Omar,” “Marge” is “Mona,” and “Bart” is “Badr.” In the Greek version of The Golden Girls, “Blanche” becomes “Bela,” while “Rose” becomes “Fifi.”

Make Sure the Audience Gets the Joke

Humour is one of the hardest things to translate. Jokes often hinge on puns and wordplay that may not be possible to replicate in the target language. For example, when translating Seinfeld into German, the episode where Jerry dates and loses his girlfriend Dolores posed a particular problem:

“Dolores represented one of the toughest puzzles Sabine had encountered: “Dolores” doesn’t rhyme with any German words for a body part, and a fabricated name would detract from the joke. Just because Jerry’s friends guessed “Bovary” as a legitimate name option in English didn’t mean she could throw any old name around in German.”

She eventually hit on “Uschi,” a German nickname for Ursula that rhymes with a German slang word for vagina.

Cross Your Fingers and Wait

When it comes to TV translation, there’s an element of luck involved. Some shows just don’t translate well into other cultures. Seinfeld was one of the most popular shows ever in America, but it hasn’t had much success in Europe. The humour is just too culturally specific. Apparently, Radboud University did a study of Dutch viewers watching Seinfeld, and they just didn’t get it:

“Viewers commonly reported being baffled by the show’s laugh track; the audience regularly missed the joke. Some of those who did laugh told researcher Elke Van Cassel that they were laughing only because the characters reminded them of Americans they knew.”

Whether it’s a TV show or your brand, successful translation is about more than simply substituting one word for another. It’s an art form that requires skilled translators with an in-depth knowledge of both languages and cultures.