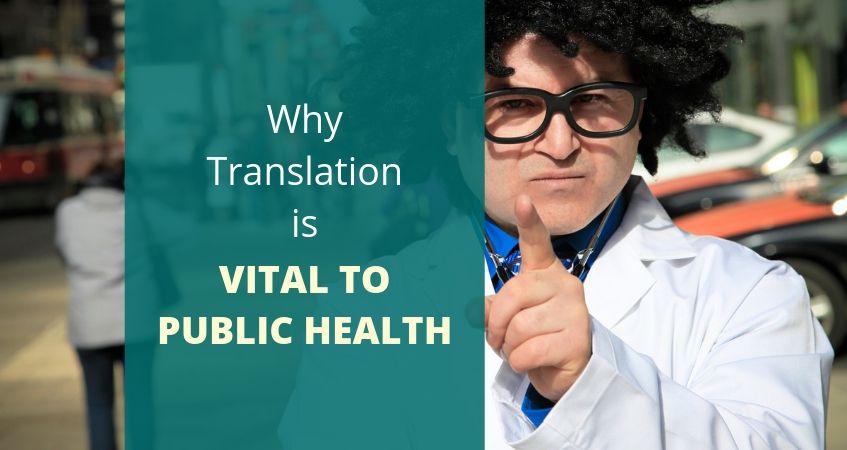 Public health campaigns are like a more benign form of advertising- instead of convincing the public to buy products, you’re trying to persuade them to change their habits. But when lives are on the line, transparent, credible communication is more critical than ever. If your audience speaks more than one language, your communication strategy needs to take that into account, as well.

Let’s take a look at some real-world examples that demonstrate why translation services are vital to public health in a multilingual world.

Nobody likes being injured or ill. When people understand how to protect themselves, more often than not, they will do so.  But if you want to ensure understanding, you have to make sure your campaign material uses the language they’re most comfortable with. It’s not always enough to use the official language or the lingua franca of the area you’re targeting.

If people can’t understand how to protect themselves, they won’t – even from threats as immediate and deadly as Ebola. In fact, language and translation have been a perennial obstacle to effectively managing Ebola outbreaks in Africa.  According to Nadia Berger and Grace Tang of Translators without Borders, in the 2014 outbreak, “the crisis was one of information, and especially information in the right language, as much as anything else”.

While most of the initial messaging was in English or French, only 20% of people in the affected area spoke either of those languages.  According to Translators without Borders,

“Providing Ebola-related material in English or French leads to important knowledge gaps: in a survey published in late August, UNICEF found that, in Sierra Leone, 30% believed Ebola was transmitted via mosquitoes and another 30% thought it was an airborne disease. Four out of ten respondents believed that hot salt-water baths are an effective cure.”

Fortunately, Translators Without  Borders was able to step in and provide much-needed linguistic assistance. However, outbreaks continue to pop up across Africa. So do translation issues. For example, initial efforts to promote an experimental vaccine in The Democratic Republic of Congo didn’t use the right terminology to reach residents, particularly women over the age of 35.

Translation keeps vulnerable groups from being left behind.

Translation also makes it easier for vulnerable groups to get the care they need to stay healthy. Inadequate translations can be a barrier to access, affecting the health of entire communities.

For example, in the United States, the Hispanic community has the highest uninsured rates of any ethnic group.

It’s especially unfortunate, then, that when the Affordable Care Act (ACA) rolled out, the Spanish translation of the website was riddled with errors. The act was designed to make it easier for Americans to find and afford health insurance.  Without health insurance, it is difficult to pay for even routine healthcare.

Until the errors were corrected, Spanish-speaking Americans found it more challenging to take advantage of the ACA’s health insurance options. As a result, many of them remained uninsured, delaying their access to preventative care and resulting in preventable health emergencies.

Over the past few years, concerns over “vaccine hesitancy” have mushroomed. In fact, the World Health Organisation named vaccine hesitancy as one of the top ten threats to global health in 2019.

This year, sporadic outbreaks of diseases such as measles are on the uptick in the United Kingdom and United States. As a result, public health authorities have been keen to increase vaccination rates in affected communities. The epicentre of the largest US outbreak is in Rockland County, an ultra-Orthodox Jewish enclave in New York City. Some ultra-Orthodox subgroups don’t vaccinate for religious reasons. With measles outbreaks also infecting parts of Europe and Israel, ultra-Orthodox communities have been particularly vulnerable.

The New York State Department of Health attempted to combat the epidemic with leaflets and door hangers in Yiddish.  Unfortunately, translation quality was not good, to put it mildly.

As Yiddish scholar Chaya Nove explained to  CNN, the translations were “barely comprehensible” and “practically indecipherable.” Errors included incorrect and outdated terminology used to describe measles symptoms, plus awkward phrasing, spelling and grammar errors. Linguistics professor Isaac Bleaman told CNN that the door hangers were “just word salad . . . Not only that, but some of the words in the salad are misspelt.” Although the public health agency hired a translation service, Google Translate and poor editing was the likely culprit.

Community leaders told CNN that the errors made it harder to convince vaccine-hesitant ultra-Orthodox families to change their views. As community activist Alexander Rapaport put it, “It comes through to the person you’re supposed to be convincing as, ‘you can’t even put together an ad right, and you want me to believe your science?’

Ultimately, public health campaigns depend on trust for success. By themselves, appeals to authority are not enough to make your message credible. That’s especially true for isolated or marginalised communities. You also have to use language that people understand. Furthermore, you have to use it correctly.

Meanwhile, if you have a serious campaign about a serious issue, you don’t want it to come off as a joke. Unfortunately, that’s what happened when Singapore’s health promotion board released a campaign about fall prevention for the elderly.

Unfortunately, without the negative connotation of “prevention,” the Chinese translation could be read as encouraging people to fall.  The campaign was mocked across social media for the translation error.

With so much at stake, it’s essential to use a reputable LSP with rigorous quality control standards. K International has decades of experience in government, health and medical translation, and our quality control process is third-party certified to ISO 9001:2015 standards.

For more information or a quote on your next project, contact us today!