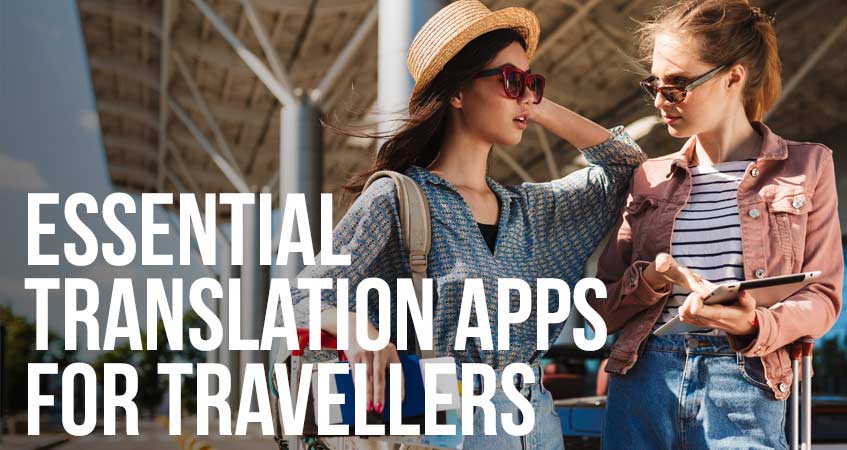 You’d love to see the world, but fear holds you back. You’re afraid of being isolated in a foreign country, unable to speak the language. How are you going to communicate? Charades? Well, stop worrying, and book those tickets! Here are 15 futuristic translation apps and devices for travellers in 2018 to help you get your point across.

This post was originally published in 2016. It has been updated for accuracy and to include new apps and devices.

When it comes to translation apps, Google Translate is obviously the elephant in the room — and for good reason. It supports more languages than the competition, and its comprehensive feature set makes it especially well-suited for travellers. 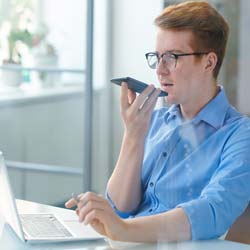 See which features work with which languages here.

Cool Tricks: Translate signs, menus and other written content using your phone’s camera. Offline support for some languages, plus excellent integration with the Android operating system for translating text messages and websites.

Recently, Google added neural machine translation (NMT) for improved accuracy in some languages. And you can launch it with your voice using Google Assistant.

All this, and it’s free. Free is good.

How to Get It: Download it from the App Store or from Google Play. 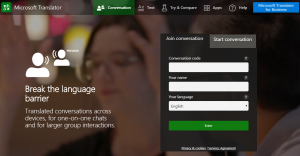 Microsoft’s answer to Google Translate has long-suffered from second place syndrome. But that’s changed. Recent updates have made it into a worthy competitor with unique strengths of its own.

Microsoft Translator lacks Google Translate’s real-time video translation feature. However, Microsoft wins a major point over Google with the superior design of its real-time conversation mode.  According to Lifehacker, this feature makes it easier to have natural conversations with the people you meet on your travels.

Languages:  Microsoft Translator only supports 61 languages, one of which is Klingon. Which is cool, but not likely to help Earthbound travellers unless you’re travelling to a sci-fi convention. Also, not all features are available for all languages. For example, speech recognition and conversation mode are only available for 10 languages.

This page will tell you how much support a particular language has.

How to Get it:  Download from the App Store or from Google Play.

Got a smartphone? ITranslate Voice provides text-to-speech and voice-to-voice translation on both iOs and Android devices.

Cool Tricks: Translates what you say right after you say it. Some offline capabilities are available for specific languages. Save your most commonly used phrases in a personalized “phrasebook” for easy access.

Languages: iTranslate Voice supports 44 languages and dialects, but not all to the same degree. Find a comprehensive list of which features are available in which languages here.

How to get it: Download it from the App Store or Google Play.

iTranslate Voice doesn’t have as many bells and whistles as Google Translate. That said, this reviewer compared the two apps during a volunteer stint at a refugee camp. In his experience, iTranslate had better voice input and output. It’s definitely worth checking out!

Worth noting: Based on the reviews, there seems to be a software conflict between the latest version of this app and Android’s native voice recognition. So, if it doesn’t work, try contacting customer support before you throw in the towel.

SayHi is a “universal translator” for iPhone, Android, and Kindle, offering speech-to-speech translation in 90 languages and dialects.

Cool tricks: You speak, SayHi translates. The app claims 95% accuracy for voice recognition. According to LapTopMag, “The spare and straightforward interface makes this app appealing.”

You can also program the voice used to be male or female, and set the speed to your liking.

Languages: SayHi features 90 languages and dialects, including an impressive list of Arabic dialects.  Some languages are text-only, though.  This page will show you a list of languages and supported features.

The downside? SayHi does require an internet connection.

How to Get It: Download it on the App Store here or on Google Play here.

TripLingo combines an interactive phrasebook with an instant voice translator, along with other useful travel tools like emergency information, a currency converter, and a tip calculator.

The translator even has formal, casual and slang translations for commonly used phrases.

Need additional help? The app can connect you to a real live human translator (for an additional fee, of course).

Right now, the company is focused on offering the app to organizations where employee travel is frequently required. But you can download it and use it as an individual, too.

How to Get It: Download from the App Store or from Google Play. 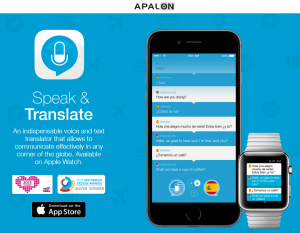 Cool Tricks: This is another app that focuses on speech-to-speech translations (but also provides text-only support for less common languages.) It’s thoroughly integrated with iCloud, so you can view your translation history on all of your Apple devices, and you can switch from one device to another mid-conversation. If you have an Apple Watch, you can use Speak & Translate on it, as well.

A few caveats for travellers: Offline translation is only available for 10 languages. Also, if you get the free version, reviewers note that the popup ads will annoy you. Finally, you only get a certain number of translations per day. (Honestly, if I were travelling this would be a deal-breaker for me).

How to Get It: Download it from the App Store. 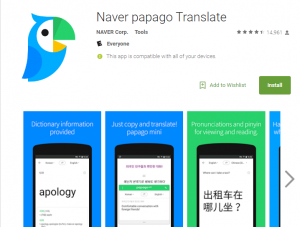 Planning a trip to Japan, China or Korea? You might want to check out Papago, a translation app that initially focused exclusively on translating the “big 3” Asian languages (Korean, Japanese and Mandarin) to and from English.

Cool Tricks: When there’s more than one possible way to translate a word or a phrase, Papago asks users to choose between two different images to establish context.  Helpful features for travellers include conversation mode, offline mode, and automatic currency conversion.

How to Get It:  Download from the App Store or from Google Play. 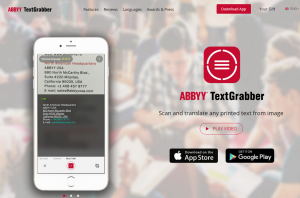 Textgrabber is an Optical Character Recognition app that “reads” text from images and offers translations.

Cool Tricks: Many of the other apps above offer image translation, but Textgrabber does more, making phone numbers, links, addresses, events and more easily clickable.

Languages: 100+ plus languages are offered with varying degrees of support. Find a complete list here.

How to Get It: Download it on the App Store here.

The ili is a wearable device that hangs around your neck and translates speech in real-time. You may remember ili’s unfortunate YouTube advertisement, which involved an actor using it to harass random Japanese girls for a kiss.

Cool Tricks: Ili bills itself as the first wearable translator for travellers. It is lightweight, fast and does not require wifi to work.

However, ili’s translation capability is somewhat limited. The device focuses on travel-related situations like restaurants, shopping, and transportation. And the translation is all one-way, so the person you’re talking to may still need to burst into charades.

How to Get One: You can order directly from the ili website here.

In 2016, a wearable translation device called the “Pilot” made waves in the tech world. It consists of two earpieces, one for each speaker, and a smartphone app.

The Pilot does require Internet access, although Waverly Labs are working on offline support.

Tech journalists are comparing it to the BabelFish from Hitchhiker’s Guide to the Galaxy. That comparison seems a bit overblown to me. But perhaps I’m just being a curmudgeon.

How to Get One: The first 4,000 devices were shipped in December 2017. To get one from the next available shipment, you can pre-order from their website.

What’s the “Babel fish” of the moment? The latest, greatest device that’s supposed to rid us of language barriers forever?

Cool Tricks: Travis can translate conversations in 80 languages, 20 of which will have offline support.  And it fits into the palm of your hand. Also, the Travis team is donating $2.50 of the purchase price of each device to digitizing and preserving threatened languages. They donate devices to international aid organizations, too.

Travis is still being developed and improved upon, but some devices have already been shipped. That said, it’s a crowdfunded product and shipping is going more slowly than anticipated. Availability is limited, and you may have to wait quite a while. But if you can wait (and understand the risks), it looks like it has potential.

Languages: Travis speaks 80 languages, all of which are listed on its IndieGogo page.  However, there is a difference in quality between online and offline translations. That’s a drawback if you plan to travel with it.

How to Get One:  You can preorder from IndieGoGo here.

In the fall of 2017, Google Pixel Buds lit up the tech world, promising to pack the power of Google Translate into a pair of lightweight headphones.

Now that the dust has settled, let’s take a quick look at the real-world pros and cons of the Pixel Buds.

Reality Check: The first and most obvious drawback is that the earphones are not a stand-alone translation solution. You have to have a Pixel phone.  And they won’t work without a data connection, so travellers may find themselves stuck typing into their phone to access Google Translation offline anyway.

Pixel Buds have a certain futuristic novelty factor, but they probably aren’t worth the price for the translation feature alone. As CNET writes, “The Pixel Buds are perfectly decent wireless headphones with a few extra tricks for Pixel phone users — but don’t expect a “Star Trek”-style universal translator.”

Cool Tricks: In the unlikely event that you meet someone on your travels who also has Dash Pro earbuds, you can pair them for supposedly seamless real-time translation.  The Verge tested this feature and found “There’s a high chance of error with each translation, but it gets the job done better than most other apps and services. I even like it better than Google’s own translation app.”

If you’re disappointed with the design of the Pixel Buds, you might consider giving these a go.

How to get one: Buy from the Bragi website here.

The Lingmo Translate One2One is a set of earpieces that use IBM’s Watson to translate 9 languages in real-time.

Cool Tricks: The One2One uses its own SIM, so you’ll need to be in the range of a data connection but you won’t need Wi-Fi and it won’t rely on your smartphone.

Reality Check: While you don’t need Wi-Fi you do need data. The earpiece won’t work if you’re completely offline, and that’s important to keep in mind if you’re travelling somewhere remote. Translation accuracy is 85%, so don’t expect perfect translations. But hey, at least they’re honest!

How to get one: The first shipment of Lingmo earpieces are sold out. You can register to find out when version 2 will be on sale here.

Are Translation Apps Worth It?

These apps may call themselves “universal translators,” but they aren’t. Not really. Have a choice between a trusted human translator or interpreter and a translation app? The human will always do a better job of translating your documents. Translation apps and devices are not 100% accurate. Please do not use them to negotiate business deals or legal matters in a language you are unfamiliar with.

That said, most travellers don’t have access to an interpreter. And most UK travellers don’t bother to learn much, if any, of the local language. For most of us, it’s a choice between amazing the locals with your technological savvy (even if the translations aren’t always right) and making a fool of yourself trying to communicate. If that’s the case? Embrace the future. Use an app!

18 thoughts on “Essential Translation Apps you Need for Travelling”