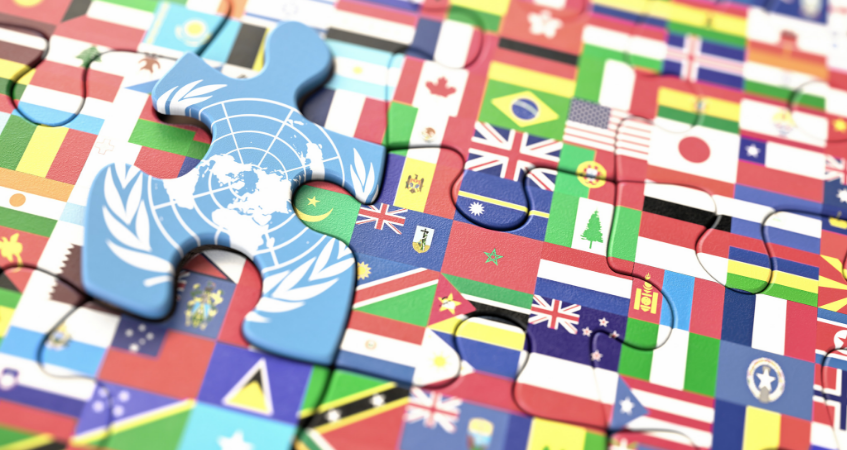 Last month, the United Nations officially recognized our favorite holiday (and no, it’s not Christmas). In a new resolution on 24 May, the UN declared September 30th International Translation Day to recognize the important role translators and interpreters play in the organization.

And it’s hard to overstate how much the UN depends on these services. Here are 5 ways translation and interpretation keep the United Nations running.

Translation at the UN: Support for 6 Official Languages

The UN has 6 official languages:  Arabic, Chinese, English, French, Russian and Spanish. As an organization, it is committed to multilingualism. Naturally, almost everything the organization does is translated into each of these 6 languages.

The correct interpretation and translation of these six languages, in both spoken and written form, is very important to the work of the Organization, because this enables clear and concise communication on issues of global importance.

Without the efforts of translators and interpreters, working in 6 different languages would be difficult, to say the least. But why not just choose one language for everyone to use? First of all, doing so would create a situation that favors native speakers of one official language over the other five. Most people are simply more comfortable communicating in their native language.

Secondly, in politics, appearances count. And favoring one official language over the others looks bad for an organization that’s supposed to fairly balance the interests of 193 different nations.

Simultaneous Interpretation at the UN

Simultaneous interpretation streamlines meetings of the  General Assembly, the Security Council and the Economic and Social Council, as well as their subsidiary bodies.

UN interpreters provide instant interpretation of delegate’s remarks and speeches into all six of the official UN languages. It’s an incredibly demanding job that requires impressive language skills and an in-depth knowledge of a wide variety of topics.

Documentation Translation at the UN

As you’d expect from an organization of its size, the UN produces a lot of documents. And the vast majority of them require translation. In fact, the UN Text Processing Units process more than 450,000 pages per year!

And these aren’t just pieces of paper, to be filed away and forgotten. As an article from The Journal of Specialised Translation [PDF] put it,

“It is fair to say that documentation is the life-blood of virtually all gatherings at the UN… Without its documentation, the work of a UN intergovernmental body may grind to a halt.”

So, kudos to the translators that keep the UN running! It’s not an easy job. Deadlines are tight, accuracy is essential, and many of the documents to be translated are written in dense, bureaucratic language. Additionally, documents are sometimes vague on purpose, to help “save face” for the different parties involved.

As the Journal of Specialised Translation notes, this intentional ambiguity creates headaches for translators:

[T]here is also the difficult question of how the translator distinguishes the deliberate obscurity that is the expression of a political and often hardwon compromise from inadvertent obscurity produced when those drafting the original text use a language that is not their mother tongue.

UN précis-writers produce concise summaries of meetings and other proceedings of United Nations bodies. They write these summaries in their main language, regardless of the language the speaker is using.

These records are then translated from English or French into the other official languages. This ensures all stakeholders have a record of the proceedings.

We’ve looked at the practical, day-to-day ways that translators and interpreters keep the UN running. But they also contribute in a less concrete, but equally important way. For example, here’s how the UN resolution recognizing International Translation Day put it:

“[P]rofessional translation, as a trade and an art, plays an important role in upholding the purposes and principles of the Charter of the United Nations, bringing nations together, facilitating dialogue, understanding and cooperation, contributing to development and strengthening world peace and security . . .”

By allowing representatives from different countries and cultures to communicate, translators and interpreters foster an atmosphere of inclusion, mutual respect, and multiculturism that makes the United Nations work.

Given how essential translation is to the United Nations, it’s hard not to say “What took you so long?” But it’s always gratifying to see the behind-the-scenes work of translators and interpreters recognized for the challenging and essential job that it is.

And while symbolic recognition is great, there’s also hope that this resolution could lead to more concrete action in the future.

For example, when Andrei Dapkiunas, Belarus’ Permanent Representative to the UN, introduced the resolution, he said

“This resolution is about the underappreciated role of language in the life of our human society. We feel that this deserves further discussion, perhaps legal protection of those translators working in conflict zones and in situations of higher risks.”

In the meantime, we’ll celebrate International Translation Day extra hard this year. Congratulations to all of the translators and interpreters that keep the UN running!

1 thought on “Translation at the UN”