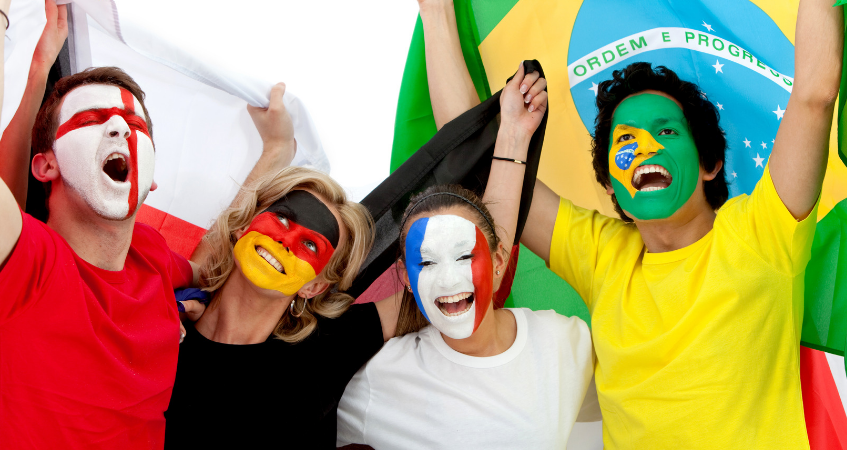 The 2018 FIFA World Cup is happening now. The opening ceremonies were held on 14 June, and the final game will take place in Moscow on 15 July. Football is one of the world’s top sports, and the World Cup is by definition a multilingual event. The focus is on the players and the games, of course, but it wouldn’t be possible without the translators and interpreters working behind the scenes. With that in mind, here are ten interesting facts and statistics about translation at the World Cup.

They are  English, French, German and Spanish. They also translate content to and from the language of the countries hosting the events. This year, of course, that’s Russia.

Instead of the Latin alphabet, Russian uses the Cyrillic alphabet. That’s part of what makes it such a challenging language to learn.

According to Slator, FIFA mainly uses a network of freelance translators, as well as some translation agencies. So, what does it take to translate for FIFA? According to Caitlin Stephens, Deputy Head of Language Services at FIFA,

“FIFA’s translators have to be both good specialists and generalists. They also have to be able to juggle working on long projects — often with short deadlines — with reacting quickly to translate urgent media releases or provide ad hoc linguistic advice.”

Russia launched a remote translation centre in 2017 for the Confederations Cup. For 2018, the translation centre is located in Moscow. According to Andrey Moiseev, head of Local Organising Committee Language Services, “there will be up to nine languages in play: five core languages (English, German, Spanish, French, Russian), the first team’s language, the second team’s language, language of the first team’s coach, language of the second team’s coach.”

Over 50 interpreters will be available so that the press conferences can be translated as quickly as possible.

Each country has their own football-specific slang.

The most striking example of this, of course, is the United States. For some odd reason, they insist on calling football “soccer.” But there are also loads of other colourful phrases in other languages to describe various aspects of the sport.

For example, according to the World in Words podcast, a chaotic moment in a football match can  be described in the following ways:

This year, gender roles and relations keep getting lost in translation.

Unfortunately, it went down in flames when organisers realised that the course manual included a section on “how to have a chance with a Russian girl.” It contained such earth-shatteringly obvious tips as “be clean,” and “treat Russian women as people instead of objects.”

Brazilian football fans could have used just such a manual. Some of them videotaped themselves insulting local Russian women in Portuguese or enticing the women to repeat obscene phrases in Portuguese. Of course, the women may get the last laugh. The men in question were dumb enough to post videos of themselves being jerks on social media. Some of them have already lost their jobs, and they may face prosecution.

As this video shows, people are friendly. However, there is not a lot of foreign-language material available to guide tourists.

Given the lack of multilingual tourist infrastructure, many fans rely on Google Translate.

And that’s not a bad thing. Apps like Google Translate are often the only practical option for leisure travellers. They certainly beat gesturing, or speaking English with a Russian accent and expecting to be understood.  But of course, they aren’t perfect.

As University of Minnesota language professor Andrew Cohen told the Associated Press, “In many ways Google Translate is remarkable” but it “may have considerable difficulty translating humor, sarcasm, subtle forms of criticism, curses, apologies so that they work, even requests in a way that they are appropriately mitigated rather than bossy sounding.”

For more ways to translate conversations while you travel, see 7 Powerful Translation Apps and Devices for Travelers.

Volunteer interpreters help meet the need for language services at the World Cup.

As the FIFA volunteer page explains, “Language services is one of the most important volunteers’ functional areas as the interpreters are irreplaceable at these high profile events.” Volunteer interpreters must know Russian and another foreign language and have prior experience in interpreting and cross-cultural communication.

Pure MT translation is not enough for FIFA.

As noted above, FIFA has quite a bit of content to translate. How much are they using machine translation?  As Caitlin Stephens told Slator, MT won’t be replacing human translators any time soon:

“The size of our translation memory has enabled us to increase productivity greatly. But as most of our work is creative and not repetitive, we will not be embracing pure machine translation anytime soon … Cost is not the only factor that we look at when outsourcing translation work as quality is of the utmost importance to us. Many of our translations are public documents and a poor translation could negatively affect FIFA’s image.”

Pure machine translation isn’t good enough for FIFA, and it shouldn’t be good enough for your business either.  To guard your brand image and communicate effectively with people from around the world,  partner with an experienced translation company like K International. Take a look at the language services we offer and feel free to get in touch!

Who are you cheering for this year? Let us know in the comments!

Previous Post Refugees Around the World, and How Translators Can Help
Next Post 5 Things To Know About Cultural Diversity in Marketing