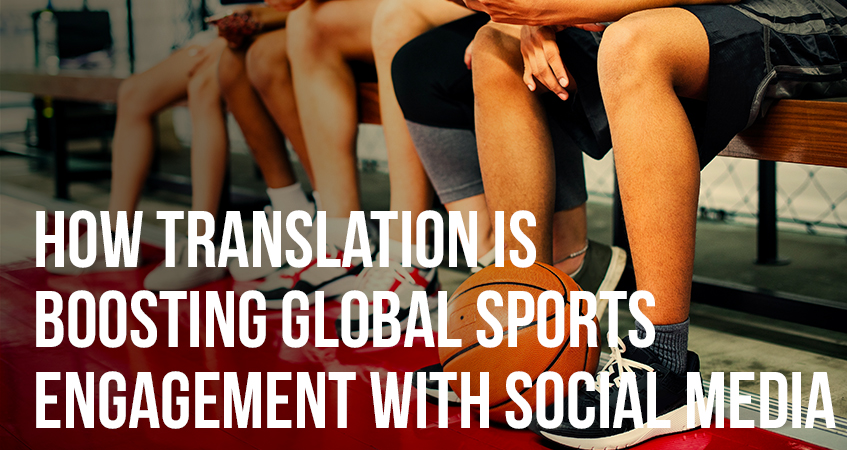 Many sports teams and organisations are now actively employing social media channels, such as Facebook and Twitter, to engage their fans. The typically informal nature of social media allows fans to feel closer to their heroes by giving the impression of, or even directly enabling them to have a personal conversation with them. Sports organisations can leverage social media sites to handle queries, offer giveaways, spread information, research fans’ likes and dislikes, and grow their fanbase.

A great benefit of the internet is that content can be viewed instantly, all over the world, so sports fans in other countries can get in on the action at the same time as domestic followers. Although a large number of international fans will be able to read and speak English, teams who provide a separate, targeted feed for a region or country, in their own language, are much more likely to engage successfully with fans on a local level and in far greater numbers.

The following case studies demonstrate a number of sports teams and organisations that are taking full advantage of social media to reach and develop an international audience.

When Canada’s Olympic team head for Rio de Janeiro in August 2016, they will bring a fully realised social media strategy, with videos, hashtags, and other devices designed to encourage sharing. Online content is particularly important for the Olympic team, as it represents such a diverse group of sports stars, with no home stadium where fans can gather.

As well as tailoring content for different platforms, so Twitter followers have a different experience to those following on Instagram or Vine, the Canadian team has dedicated resources to providing a French-language feed for French Canadian fans, and other French speakers. Rather than simply translating posts designed for an English speaking audience, the French content team creates new material for the different requirements of the French language and its speakers.

Mark Nadolny, the Canadian Olympics Committee’s digital products specialist, reports growth across all social media channels since implementing this strategy, designed to ensure no Canadian, or fan of the Canadian team, misses a ‘medal moment’.

Football leads the world of sport when it comes to social media engagement, with both teams and individual players accruing followers in the millions. You would expect the sport’s governing body, the Fédération Internationale de Football Association (FIFA) to be on top of the game, and they are.

In 2014, FIFA made 672 million tweets around the Brazilian World Cup, reaching more than a billion fans. As well as major events like the World Cup, FIFA’s social media strategy covers tournaments worldwide, all year round, keeping football foremost in people’s minds.

Because football brings together teams and fans from all over the world, it’s vital for FIFA to have an international outlook. The organisation runs ten Facebook pages and a large number of Twitter accounts, covering multiple languages.

FIFA employs an overall social media manager, who works with the social media manager for each language to achieve consistency and coordination of messages. The languages covered are English, French, Spanish, German, and Arabic, with additional coverage in Russian for the World Cup. Extra languages are added to cover large events in countries whose language is not part of the FIFA social media portfolio, for example, Portuguese for the World Cup in Brazil.

Having a global reach with a local feel allows FIFA to roll out new content strategies at a local level before bringing them into play worldwide, and to learn about the different needs and likes of fans in different countries. At the other end of the scale, positive local stories can be spread around the world instantly, reaching journalists as well as fans.

Twitter helps FIFA commercially, with localised content explaining how to buy tickets and avoid black market sellers, and it also helps fans find their way around when they visit foreign countries for a match.

Above all, their social media strategy allows FIFA to achieve their aim of making contact with fans and increasing awareness of the many sides of football.

For the future, FIFA plans to target its audience by country, not just by language, so that Spanish speakers in Mexico or Costa Rica are served different content to those in Spain.

For two weeks every summer, the focus of the sporting world is tennis and a suburb of south west London.

As part of a drive to attract younger fans and promote the tournament’s sponsors, Wimbledon 2015 employed a social media strategy designed to reach and engage their widest-ever audience. This included using drones to gather video footage, and offering exclusive interviews. Content was tailored to each social media platform, so Twitter users enjoyed different activities to those following on Facebook and Snapchat geofilters

Wimbledon’s widely commended social push reached an online audience of 9 million, an increase of 63% on previous figures, smashing their 7 million target, and reported a 400% increase in commercial value for sponsors Rolex, Evian, and Stella Artois.

Twenty teams from six continents competed in the 2015 Rugby World Cup, making it a truly global event. Rugby World’s social media strategy was designed to be inclusive of both fans travelling to the UK from other countries to watch the matches, played across eleven venues, and those keeping up with the action from home, on TV and over the internet.

The official Rugby World Cup app was available in English, French, Spanish, and Japanese, as were the website and the main social media accounts. In addition, Rugby World partnered with calendar platform CalReply to create bespoke schedules. Fans could download match dates, reminders, and other information to their phone or PC calendar, in their own language and tailored by region and broadcaster.

Not all sports organisations need to include a portfolio of languages in their social media strategy. The Tour de France tweets in both English and French from their main account (but they also have specific UK & German accounts), picking short phrases so both languages will fit into 140 characters. However, the nature of the event provides such stunning visuals that the campaign makes heavy use of Instagram, Vine, and Pinterest, no words required.

However, other teams and organisations might be missing out on a golden opportunity. Formula 1 has long lagged behind other organisations when it comes to social media, with boss Bernie Ecclestone publicly stating that he didn’t see how social networks could benefit the sport full stop, let alone in other languages. Thus, despite the global reach of the sport, with races taking place around the world, many fans are left out of the social media action. This has caused many to question F1’s overall approach to new media, some are begining to ask whether the decline in the sport’s viewership is, in part at least, due to a lack of motivation to attract a new generation of fans via social media.

The Movistar Yamaha MotoGP team tweets exclusively in English, despite being a Japanese brand and it’s signing of the hugely popular rider, Valentino Rossi, who has a massive following in his native Italy. Italian tweets are left to Rossi’s own account.

Offering content in multiple languages, and doing it well, is a big commitment, and requires a great deal of forward planning. Sporting organisations should ask themselves whether their goals are realistic, if translation is a good use of their social media budget, and which global markets they should be targeting.

It can be tempting to rely on the use of automated software translation systems, such as those provided by Twitter and Facebook, to generate multiple languages. However, machine translation is imperfect, and a native speaker will easily spot the difference, which could easily impact the project’s success. Employing an editor for each of the languages offered, all of whom can post content tailored to their audience, but also draw from a central pool of resources, might take more time and effort, but provides a better service to the fans, and is more likely to win their hearts. For this reason, it is imperative that a professional approach to social media translation is employed to manage the risks, so mistakes that can have very real and public repercussions are avoided at all costs.

When planning an international social media campaign that leverages translation, it is important to think past short term monetary gains and instead consider the long term and less tangible rewards. Sports organisations that take the time and trouble to engage fans in a range of locations and languages benefit from more detailed data and increased recognition, as well as better sales of tickets and merchandise in the long run. In addition, they can improve or even develop the profile of their sport as a whole which can then contribute to large financial rewards that come from such things as the sale of television rights in new regions. If an international fan base exists there are clear business opportunities to increase global revenue streams through a wide variety of options by tailoring engagement for specific regions.

We have written another related article on the subject of translation’s role in developing the global success of sport, you can read it here

Tags: Social media
Previous Post What is Happiness In China? The Answer May Surprise You
Next Post Localizing Luxury Brands