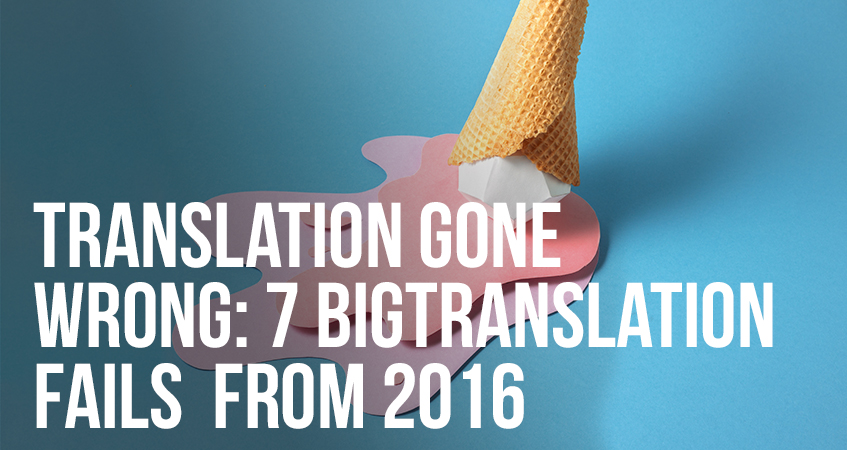 2016 is over halfway gone. Let’s look back at some of this year’s best examples of translation gone wrong  (so far).  This year, we have a little bit of everything, from menu translations that will kill your appetite to translation gaffes from major political candidates. Here are the biggest and funniest translation fails of 2016!

In the Darkest Depths of Russia…

Who knew Led Zeppelin’s 1969 hit Ramble On was actually an ode to Russian girls? Well, you might have thought so, anyway, if you’d been using Google Translate to translate from Ukrainian into Russian in January 2016.  A glitch caused the service to translate “Russia” into “Mordor,” the fictional home of Sauron in The Lord of the Rings.

According to the BBC, the error came about due to a flurry of internet chatter following Russia’s 2014 annexation of Crimea. Online commentators in Ukraine began referring to Russia as “Mordor,” and  Google Translate picked up on it.

Fashion Brands Monkey Around in China

One of my Chinese friends thinks this is Louis Vuitton’s inspiration for their Year of the Monkey jewelry. ???????????? pic.twitter.com/8JNvJwaPV1

2016 was the Year of the Monkey, and Western fashion brands tried hard to cash in with special monkey-related merchandise. Unfortunately, some of their efforts got lost in translation. Consider, as seen in Business Insider, the “creepy” gold-finished and rhinestone-studded monkey necklace offered by Louis Vuitton, or the cartoonish red-and-gold monkey keychain offered by Dior. Both were trashed on Chinese fashion blogs. So was a Givenchy “Year of the Monkey” T-shirt which featured what Chinese fashion blogger Gogoboi called “orangutans” in eyeshadow. (I think it’s actually a pair of baboons, but his point still stands. Traditional Chinese monkeys are usually macaques or gibbons. Baboons live in Africa.)

The moral of this story? Don’t think that designing to make a cultural reference will generate enough goodwill amongst consumers that they won’t care how ugly your merchandise is!

Nike had a Chinese New Year translation fail of its own this year.  It’s Special Edition Air Force 1 shoe could be customized with the characters 發 (‘fa’) and 福 (‘fu’) embroidered on the heels.  Viewed separately, the characters mean “prosperity” and “luck.” Viewed side-by-side as they were shown in  the advertisement for the sneakers, however, they sent a different message: “Get fat.” Oops!

NikeStore’s official Weibo microblog has seen an influx of more than 2,550 comments since the introduction of the new shoes. Responses range from the mild (“Excuse me?! Get fat?!”) to the more acerbic (“What kind of misunderstanding do you have about Chinese culture? Surely you have one Chinese person in your company! Otherwise, you can simply look for one on the streets!”).

Nike responded to say that each pair of shoes would only have one of the two characters, not one of each. That’s all well and good, but someone still should have taken a second glance at the ad before they released it into the wild.

B & Q Moves Across the Pond?

When a Welsh B&Q store near Aberystwyth changed addresses, they put up signs in Welsh to advise customers of the move. Unfortunately, the signs suggested customers go find “United States” instead of “us,” using the Welsh translation “Unol Daleithiau”.

This is why you don’t trust Google Translate even with the easy stuff, folks.

They didn’t translate Hispanics to Hispanos and they used para instead of por ????https://t.co/5oUYZOhoWO #RNCinCLE pic.twitter.com/pc32XmP7Ba

Donald Trump does not exactly have a high approval rating amongst US Hispanics. At the Republican National Convention,  his campaign attempted to combat that impression by having members of the crowd hold up signs that read “Hispanics for Trump.” In Spanish, of course.

They utterly botched the translation. Out of the three words on the signs, the only world they got right was “Trump.” “Hispanics” should have been translated to Hispanos. And while “para” could be translated as “for,” it’s used in a different context. The sign should have said “por.”

If you want to express support for someone with your vote, it should be “por.” That is the preposition that goes with the verb “votar.”

“Para” doesn’t make sense in that context, unless you work for him, that is the preposition that goes with “trabajar.” … [But] actually the best option would have been “con,” that expresses general support. “Latinos con Trump.” But I don’t think they will print many of those signs.

If Mr. Trump ends up becoming the leader of the free world, here’s hoping he hires some better translators!

“Authorities Fry Hard to Fix Korean Menus Lost in Translation” is the headline of a story in Korea Times about government attempts to clean up translation errors in Chinese menus.  I love the smell of irony in the morning!

You know what they say: If at first, you don’t succeed, fry, fry again!

House special, or special of the house of ill repute?

This Chinese menu translation fail comes to us courtesy of Engrish.com.  I’m not sure what this shrimp dish was originally, or how it got translated to “gonorrhoea hot springs shrimp,” but I suspect machine translation is at fault here. I’m sure the dish is quite tasty…but I wouldn’t eat it, would you?

Don’t want your business to look silly to people from other cultures? Neither do we! Check out our translation services and find out how our team can keep you looking sharp in any language!

Tags: Translation Errors translation fails
Previous Post Why Translation is Important In A World Where English is Everywhere
Next Post The Language of Pokémon Go