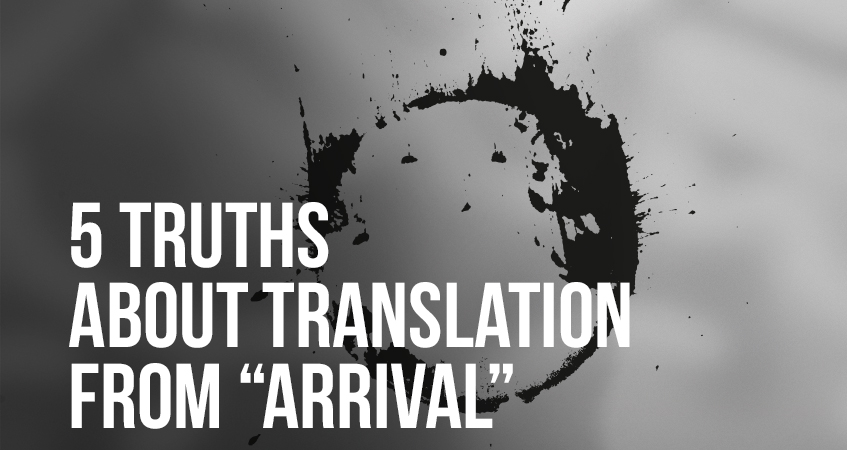 Have you seen Arrival yet? In this new science fiction movie, linguists and translators finally get their due. The heroine, Dr. Louise Banks, doesn’t use weapons or fly a spaceship. She’s a linguist, and the plot of the movie centers around her struggle to translate the language of an alien race visiting Earth. Want to learn more? Here are 5 truths about translation from Arrival:

Learning Another Language Can Change You

In the movie, the aliens’ strange written language reflects their understanding of time as nonlinear; a circle, instead of a line.  Learning it changes Dr Banks’ perception and allows her to glimpse the future before it happens.

Obviously, in the real world, learning a new language won’t give you psychic fortune-telling abilities. But there is evidence it can change the way you think by making you use different parts of your brain.

For example, a 2012 study showed that people make smarter financial decisions when they think through a situation in a foreign language. They tend to be more rational and less dependent on emotion.  So, more like Vulcans.

Also, learning a new language can give you insight into how other cultures perceive the world, perhaps making it easier to understand and empathize with them.

In Translation, Every Word Counts

Translators know it’s not always as easy as you’d think to find the right word for a given situation. In Arrival, the fate of the world literally depends on one word: Did the aliens come to bring us a “tool,” or did they come armed with a weapon?

The climax hinges on this ambiguity. Countries around the world are trying to communicate with alien visitors. Translation teams from various nations have translated some of the symbols the aliens are using to try to communicate as “offer weapon” or “use weapon.”

Dr Banks believes that a better translation might be “tool.” But can she prove it before a nervous world starts a war?

In translation, every word matters.  By the way, that’s why businesses shouldn’t rely on Google Translate for anything important.  The difference between “may contain nuts” and “may contain walnuts” is a huge compliance headache at best, and sick or dead customers at worst.

Translation Errors Can Literally Be the End of the World

At K International, we think making fun of translation errors is a good sport. However, it’s worth noting that the consequences of getting it wrong can sometimes be more severe than mere mockery.

In Arrival, with tensions high, an incorrect translation is the spark that could set off a war between the “heptapod” aliens and Earth, and possibly World War III as well.

So, basically Armageddon. Over a translation error. But could that happen in real life? There’s definitely precedent.  For example, a translation error influenced the US government’s decision to drop atomic bombs on Hiroshima and Nagasaki. As Rich noted in “Translators at War,”

“Before these attacks, reporters asked Japanese Premier Kantara Suzuki how he felt about the Allies’ request that Japan surrender. He replied with the word ‘mokusatsu’. This was translated at the time as “not worthy of comment”, but it should have been translated as “no comment”, indicating that the Japanese government had not had a chance to properly consider the request. The first of the atomic bombs went off 10 days later.”

And we’ve only gotten better at building deadly and destructive nuclear weapons since then.  It’s not hard to imagine that someday, the fate of the entire world might rest on a single word, correctly translated.

One of the refreshing things about Arrival is that there’s no “universal translator” or “Babelfish” or other sci-fi plot device to smooth over the difficulties in communicating with an alien race.  Instead, the struggle to communicate is the plot.

In the real world, too, there’s only so much that technology can do.  Machine translation can give you the “gist” of a paragraph, with questionable accuracy. If you want to communicate your message clearly and effectively, you need a human.

Translation is All About Empathy

Translating accurately often takes more than just knowledge. It takes empathy.  Good translators meet their audience where they are: finding jokes that are funny in the target culture. They choose words that aren’t just “correct,” but carefully select those that will mirror the emotions elicited by the source.

Translation makes communication possible,  promotes empathy and breaks down cultural barriers. When we can communicate with other people, we are able to see them as people, instead of stereotypes. In Arrival, learning the heptapod language helps Dr Banks to form a human connection with the Chinese general and stop him from attacking the aliens.  As screenwriter Eric Heisserer explained to the Atlantic, that scene changes the way the audience sees the Chinese:

“We’re thinking of them as a potential enemy. And we’re taking whatever’s being said in Chinese, whoever’s translating that is taking it to the U.S. news and saying, “Oh, this is the big bad general.” No. We don’t know what’s going on with him until we see him in person. We realize he’s not the character we thought him to be: He’s really honored to meet Louise, and something really poetic and personal has happened there.”

Given everything that’s going on in the world today, I think we could all use a little more empathy.

Have you seen Arrival? What did you think? Let us know in the comments!