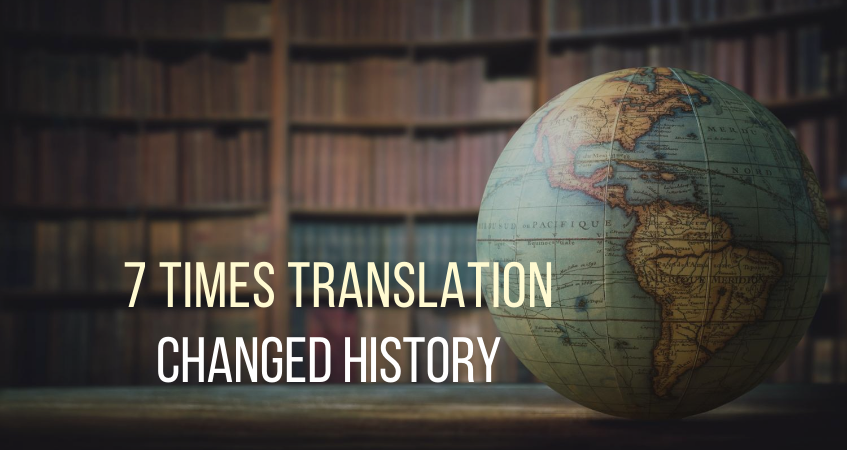 How important is translation in history? History is made when different cultures collide, and the art of translation has played a key behind-the-scenes role in shaping historical events. In fact, here are seven examples of translations that changed the course of history:

The Bible has been translated hundreds of times as Christianity spread across the globe. The historical consequences are immeasurable. The Bible has inspired wars, conquest and crusades, as well as acts of charity and courage. Probably the most important Biblical translation dates back to 382 AD. In that year, the Pope Damasus I commissioned St. Jerome to translate the Old and New Testaments into Latin from the original Greek and Hebrew texts. The resulting work became known as the Vulgate. For a thousand years, it was the only version of the Bible that most Christians ever encountered.

There were some peculiarities in Jerome’s translation, too. A prime example is the description of Moses coming back with the Ten Commandments. Jerome used the Latin cornuta (horned) for the Hebrew karan. A better translation might have been “shining” or “radiant.” In any event, people took it literally. Images of a horned Moses abound in Medieval and Renaissance Art.

Western civilisation owes a great deal to the ancient Greeks. Renaissance scholars and revolutionaries alike have taken ideas and inspiration from the classic Greek philosophers.

Did you know that we owe a good deal of our knowledge of ancient Greek philosophy to Arabic translators?  Starting in the 8th century, caliphs of the Abbasid dynasty commissioned Arabic translations of Greek scholarly works. During a period of time when Europe and the Byzantine Empire had almost forgotten philosophers like Socrates, Aristotle and Plato, Muslims helped keep their ideas alive.

Referring to the Spanish conquest,  Hernán Cortés was said by contemporaries to have declared that “after God, Marina was the main reason for his success.” “Marina” was the Christian name of La Malinche, Cortés’ native interpreter and the mother of his first son.

La Malinche was able to speak Nahuatl and Mayan, and she quickly learned Spanish. She interpreted for Cortes and spoke for him, to the point where native people described La Malinche and Cortes as a single entity, Malintzin. The “New World” would look very different without her.

Khruschev Threatens the West… or Does He?

In 1956, with Cold War tensions high, Soviet Premier Nikita Khruschev told a group of Western diplomats,”We will bury you.” The West took it as a threat, and it stoked the fires of fear and tension between communist Russia and the capitalist West.

But Khruschev didn’t really mean it as a threat. He was using a common Russian saying “Мы вас похороним!”, which is better translated as “We shall be present at your funeral” or “We shall outlive you.”  In another speech in 1963, Khruschev clarified, ” Of course we will not bury you with a shovel. Your own working class will bury you.” But the damage was done.

The US Drops the Bomb

Conventional wisdom in the US is that dropping the atomic bomb on Hiroshima and Nagasaki was necessary to end the war with Japan. Japan, after all, refused to surrender.

When reporters asked Japanese Premier Kantara Suzuki how his government felt about the Allies’ request that Japan surrender, he replied “Mokusatsu.”

This one-word answer was translated as “Not worthy of comment,” when actually it should have been translated as “No comment” because the Japanese government hadn’t had a chance to consider it yet.  The bombs went off 10 days later. According to the US National Security Agency:

“Whoever it was who decided to translate mokusatsu by the one meaning (even though that is the first definition in the dictionary) and didn’t add a note that the word might also mean nothing stronger than “to withhold comment” did a horrible disservice to the people who read his translation, people who knew no Japanese, people who would probably never see the original Japanese text and who would never know that there was an ambiguous word used.”

A man of dizzying intellect once said, “Never get involved in a land war in Asia.” That goes double when the rationale for the war in question is based on poor intelligence and mistranslations.  In 1964, the North Vietnamese supposedly attacked US destroyers in the Gulf of Tonkin not once, but twice. That second attack was used as the basis to launch the war, but it never actually happened.

According to the New York Times, the NSA made a mistake when translating intelligence from North Vietnam. Then, they refused to correct it. Instead, they doubled down, falsified the translation and destroyed the source material:

One issue, for example, was the translation of a phrase in an Aug. 4 North Vietnamese transmission. In some documents the phrase, “we sacrificed two comrades” — an apparent reference to casualties during the clash with American ships on Aug. 2 — was incorrectly translated as “we sacrificed two ships.” That phrase was used to suggest that the North Vietnamese were reporting the loss of ships in a new battle Aug. 4, the intelligence official said.

The original Vietnamese version of that intercept, unlike many other intercepts from the same period, is missing from the agency’s archives, the official said.

The cost? 1,313,000 people dead, countless wounded, and the devastating environmental effects of Agent Orange that continue to this day.

The last two examples were heart-breaking, so let’s finish on a more lighthearted note. In 1877, Italian astronomer Giovanni Virginio Schiaparelli began mapping the surface of Mars: seas, continents and channels, which he called “canali.” Fortunately for the science fiction genre, English-speaking astronomers translated “canali” as canals. That would imply that there was not only life on Mars, but a civilisation advanced enough to build them. This inspired some of the great early science fiction, like H G Wells’ War of the Worlds and Edgar Rice Burroughs’ A Princess of Mars.

The bottom line? Translation matters, both to history and to your business.  Get it right the first time – our translation services can help!