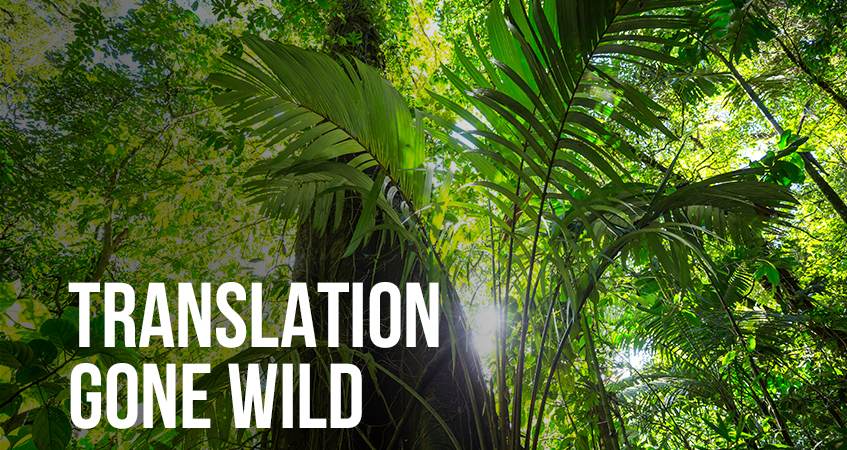 Over the past year, machine translation has made significant progress. Tech giants like Google, Microsoft, and Facebook are building powerful Neural Machine Translation (NMT) systems modelled after the human brain.

NMT offers improved accuracy compared to older machine translation systems. To hear the headlines tell it, that means all of our translation problems are solved. Who needs a human translator when you’ve got artificial intelligence?

But if that were true, we wouldn’t have these amusing translation mistakes to share with you, would we?

Voice-to-text translation sounds amazing, in theory. Just speak into a microphone, wait a few seconds, and “Voila!” The system automatically translates your words, and you don’t even have to lift a finger.

And it is amazing when it works. But therein lies the rub. Regional accents and dialects can throw these systems off.

For example, the video above shows what happens when Google tries to translate a South African Parliament session.

As the South African noted,

It completely fails on the translations, but sometimes even gets the accents wrong, too. The result? An utterly hilarious, non-sensical load of gibberish.

Some might say that’s what parliament is most of the time anyway, but adding the subtitles takes this all to the next level.

The highlight? A dignified-looking female parliament member says something that gets translated as “algunas piranhas pussy trailer.”

Granted, much of this video is actually in English, spoken by people with thick accents. But you can see how the accents throw Google off. Sometimes, it doesn’t even know what language to use.

Got some time to kill while you wait for the weekend? Here’s a fun game, courtesy of the good people at Language Log.

Simply pull up Google Translate, and enter or paste a small string of characters from a language that uses a non-Latin script. Thai, Japanese and Korean all work well. Keep entering the same set of repetitive gibberish characters, and watch the translation change into something that sounds surprisingly philosophical.

For example, at one point, this string of random Thai letters brought up the following sentence:

Type “La plume de ma tante est sur la table” into Google Translate and ask for an English translation, and you get something that might incline you, if asked whether you would agree to ride in a self-driving car programmed by the same people, to say yes. But look at the weird sh* that comes from inputting Asian language repeated syllable sequences and you not only wouldn’t get in the car, you wouldn’t want to be in a parking lot where it was driving around on a test run.

@AuschwitzMuseum thank you very much for the info. All of our english translations are done via a script so this error was not on purpose.

In June, Amazon UK became the target of complaints thanks to a latex fake wound being sold on the site.

The costume accessory, from German retail Horror-Shop.com, was labelled as a “Holocaust wound.” Understandably, the Auschwitz Museum and Memorial were not pleased with the product name. So, they tweeted their disapproval to Amazon and to Horror-Shop.com’s Twitter account.

The item was removed, and Horror-Shop.com responded:

@AuschwitzMuseum thank you very much for the info. All of our english translations are done via a script so this error was not on purpose.”

People, people, people . . . This is why you can’t just use Google Translate, or any other type of machine translation, without an actual human translator to proofread.

my favorite Switch game is getting a retranslation soon ???? pic.twitter.com/uQvYXr8ykB

“Vroom in the Night,” a new video game for the Nintendo Switch, made waves earlier this year for all the wrong reasons – namely, its terrible translation.  Example lines include:

It’s hard to tell whether they used machine translation or translators who weren’t fluent or what. Nintendo attempted to address the translation issues with a patch, but the supposedly “new-and-improved” translations were still bad.

The examples above were all either definitely or probably the result of letting computers take over translation without proper supervision.

This next example shows how difficult translation can be, even for humans. During the French election,  presidential candidate Jean-Luc Mélenchon campaigned on the slogan “La France Insoumise.”

How to translate it into English? FRANCE 24 covered the controversy:

On yesterday’s “Campaign Beat”, FRANCE 24’s own Florence Villeminot went with the literal translation “Unsubmissive France”, which Wikipedia has adopted as well. It all made this copy editor groan a bit, what with its not-so-subtle S&M overtones. . . Politico has come up with “France Untamed”, which seems more appropriate for an eau de parfum than a political campaign. A quick internet search proves this hunch to be correct. And yes, Victoria’s Secret “France Untamed” body spray is still available in Turkey

FRANCE 24 appeared to settle on “Indomitable France,” while the New York Times went with “France Unbowed” or “Rebellious France.”

For the record, AI-powered Google Translate goes with “rebellious”, “unruly” or “contumacious.”

So much of translation is all about nuance. It’s about knowing when it’s okay to use “holocaust” and when to use “disaster” instead. It’s about understanding why “France Untamed” or “Unsubmissive France” might make readers snicker.

And the machines just don’t get it. Not yet. So if you want to make sure your business translations are accurate, give us a call! We can help you speak to your global audience with the same “voice” you use in your native country.

For more about the history and current capabilities of machine translation, see “Machine Translation: A Potted History.”

Have any more examples of funny translation mistakes? Share them in the comments!