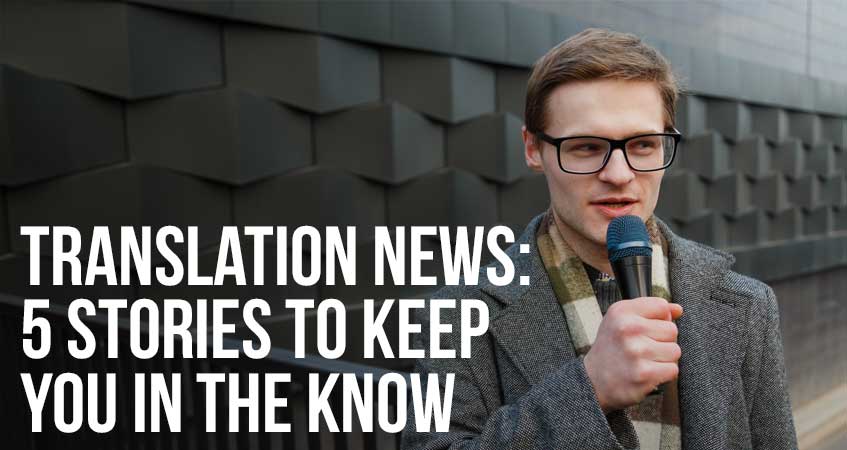 Can you believe we’re already one month into 2016? Neither can we! Life moves fast. Here are five language and translation news stories you may have missed.

We’re not even out of January yet, and already Google Translate has made a high-profile (and hilarious) error. The online translation service’s algorithms somehow decided that when translating from Ukrainian to Russian, “Russia” should be translated as “Mordor.”

Additionally, the service translated  Russian foreign minister Sergey Lavrov’s name as “sad little horse.” No word on whether Putin became “Sauron” or not.

The error was probably caused by online chatter from Ukrainians about Russia, which took a turn for the dark side after the Russian annexation of Crimea.

Google released a statement on the matter which almost perfectly demonstrates why you should think twice about using Google Translate for your business:

“Google Translate is an automatic translator – it works without the intervention of human translators, using technology instead. This means that not all translations are perfect, and there will sometimes be mistakes or mistranslations. We always work to correct these as quickly as possible when they are brought to our attention.”

Who doesn’t like grilled cheese? The Office Québécois de la Langue Française, apparently. The OQLF, which is tasked with protecting the French language and culture in Quebec, issued a citation to the Resto La Mama Grilled Cheese Gourmet sandwich shop in Quebec City.  The office reportedly had two issues with the restaurant’s signage:

In a statement to the Global News, restaurant co-owner  Stephane Rheaume said that it wouldn’t make sense to change the restaurant name.  Nature’s perfect food requires no translation:

“There are some terms that you can’t change. A sushi is a sushi – you can’t call it a Japanese roll,” Rheaume told Global News. A grilled cheese is a grilled cheese. It’s not a sandwich du fromage fondu.”

After much social media outcry, the OQLF backed down and released a statement saying the restaurant name could remain as is.

Skype Rolls Out Instant Translation to All Windows Users

Skype’s new feature is admittedly pretty cool, but it’s also had some serious accuracy issues in the past. Inquiring minds want to know: Does it still have a potty mouth?

The makers of the Ili, a new wearable translation device that translates between English, Chinese and Japanese, blew up the Internet earlier this month with an ad depicting a British man looking for love in all the wrong places in Tokyo. And by “looking for love,” I mean sexually harassing random Japanese women, spouting atrociously bad pickup lines and trying to convince them to kiss him. Gross.

Additionally, another ad for the product features an awkward translation error, as Rocket News pointed out:

Ili has interpreted “What’s up?” as a greeting, not an earnest request for information. That’s not a bad conclusion, but it’s chosen to translate the phrase as “Ne, genki?”, a common Japanese greeting that literally means, “Hey, are you doing well?” As such, the translated-into-English response to “What’s up?” is likely to be something like, “Yeah, I sure am!”

Ili is a pretty cool device and would definitely make getting around in Japan easier for tourists who don’t speak the language. However, this is a good reminder of why you wouldn’t want to use it to translate anything business-related.

*According to LogBar, the company that makes Ili, all the women in the video were paid, actresses. Still gross.

Chinese poet Feng Tang found himself in hot water after his Chinese translation of Indian poet Rabindranath Tagore’s Stray Birds was pulled from the shelves for being “too vulgar.” According to the Guardian,

In the passage that has drawn the strongest objections, Feng translated the line “The world takes off its mask of vastness for its lover” as “The world unzipped his pants in front of his lover”.

The translation angered both Indian intellectuals and many Chinese Tagore fans.  In an editorial, the People’s Daily called for more rules to govern translated literature, saying

“Feng Tang has the freedom to show his personal style, and there are people who may like this style, but arbitrary translation without any shackles cannot be called translation.”

What do you think? Did Feng’s translation go too far? Are there any good translation news stories we missed? Let us know in the comments!