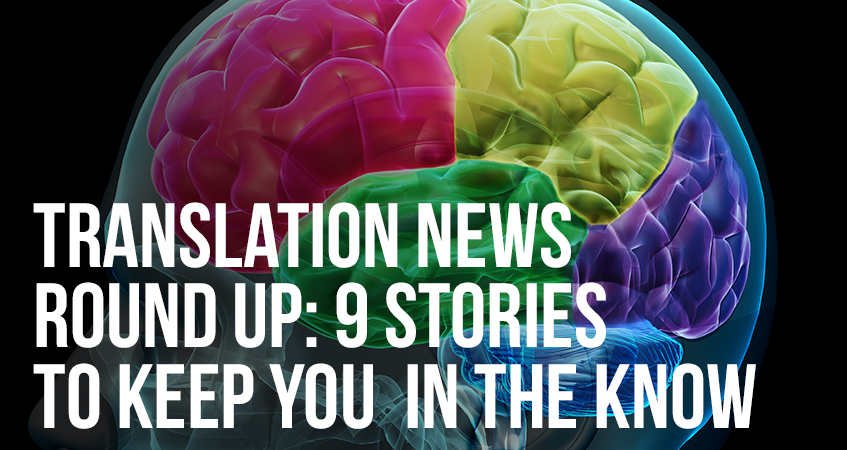 What’s been going on the translation industry lately? Here are 9 language and translation news stories to keep you in the know.

How To Instantly Identify Any Language

Raise your savoir-faire quotient in minutes with this easy-to-learn party trick that makes you look like the smartest person in the room. Read this article to learn how to identify almost any written language, even if you can’t read a word of it.

Language learning has many benefits, including better problem-solving skills and a more focused attention span. Now, researchers at the University of Edinburgh have demonstrated that students can get a brain boost from learning a new language after only a week of intensive study. The benefit persisted as long as the students continued practising for at least five hours a week.

Lionsgate Leads Effort To Provide Local-Language Films Around the World

Lionsgate just announced a new venture: Globalgate Entertainment. Globalgate aims to remake and adapt successful films for different markets around the world. According to the Hollywood Reporter, “Lionsgate points to a thriving world market for local-language films — a 90 percent share in India, 60 percent of China’s exhibition market, 55 percent in Japan and a 50 percent share in Korea — to explain its backing for Globalgate.”

Google Search will now translate any foreign words you search for automatically. No need to pull up Google Translate. No need to do anything except search for a word in a language that’s different to the one you’re browsing in. No need to give permission; Google would rather ask for forgiveness.  Or not.  Your feelings on this matter are irrelevant.

Google Translate Gets Into the Restaurant Business

Google Translate held an early birthday party for itself in New York last month. The company sponsored a four-day long pop-up restaurant featuring 4 prominent chefs from around the world.

But what was the point? Was it just a publicity stunt? Yes and no. According to Geek Time,

The mission here, which they still have some work to do if they want to complete, is to break a simply linear association of Google Translate with the office. If Alphabet can continue to improve its sign-recognition software, and go all out with these sorts of promotions in the future, they might be able to associate Google Translate with luxury dining for high-rolling tourists and business travelers, or off-the-beaten-track trekkers dropping in on lodges in rural India or the Andes Mountains.

Katy Perry has been trying to purchase a $14.5 million dollar convent in Los Angeles. Unfortunately, the nuns who used to live there object. The Archdiocese of Los Angeles wants to sell the property to Perry. The nuns, who claim they own the property, want to sell to a hotel developer.

A court ruled against the nuns after Perry’s lawyers produced a copy of Vatican decree, translated from the original Latin, that appeared to support the singer’s case. Now, the nuns are arguing that the decree was mistranslated:

“In fact, and completely contrary to what [LA archdiocese] represented to the Court, the Decree, when properly translated from its original Latin into English, stated in no uncertain terms that the dispute” was still being decided in Rome, the motion states.

This is an excellent reminder of why legal translation is kind of a big deal.

Who Owns Klingon? A Court Will Soon Decide

Who owns a “created language” like Klingon? A US court may soon decide the answer to that question. The lawsuit involves a crowdfunded Star Trek fan film called Axanar. Last year, Paramount filed a lawsuit to stop the film. As part of the lawsuit, the studio is claiming rights to the Klingon language. The Axanar filmmakers, meanwhile, have argued that Klingon is a “useful system” that cannot be copyrighted.

“This argument is absurd since a language is only useful if it can be used to communicate with people, and there are no Klingons with whom to communicate.”

Want to learn more about how our brains process language? This amazing 3D map of the brain shows how different words make different regions of the light up as volunteers listen to a story. Watch the video below.  Or, visit the interactive website here.

And last but not least, K International was awarded a place on the government Framework Agreement, now designated RM1092, for Written Translation, Transcription and Ancillary Services by the Crown Commercial Service.

Are there any other stories related to language and translation that we’ve missed? Share them in the comments!