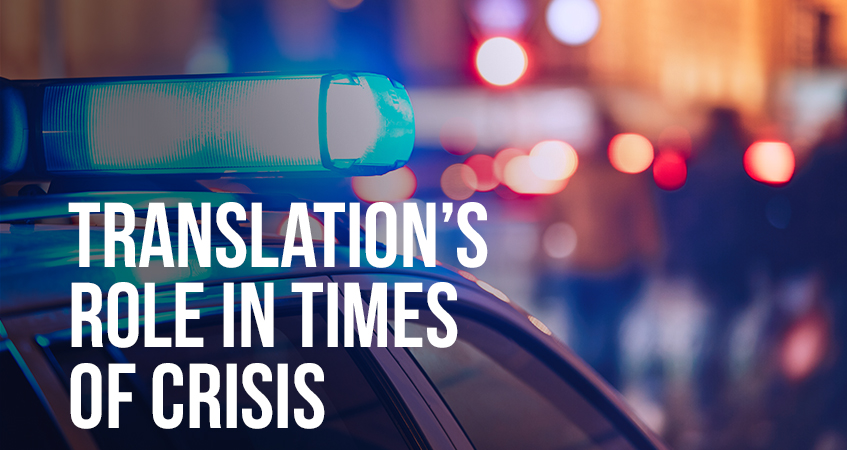 Recent tragedies have highlighted the important role communication has in supporting victims of a crisis, both during and after an incident, not to mention the responsibility placed upon it in terms of prevention and reducing the overall impact when such an event is unavoidable. Given the diversity of local populations, particularly in cities, this is an important consideration in modern times. For example, 22% of London’s population – equating to 1.7 million people – don’t speak English as their first language. In fact, according to the 2011 Census, some 320,000 of the capital’s residents speak little or no English at all. While such diversity brings with it many reasons to celebrate, it can also create challenges for the authorities in supporting those in need during a crisis.

In this article, we take a look at three recent examples and consider how translation, or lack thereof, has affected the people caught up in an incident.

The horror of London’s Grenfell fire is still fresh in people’s minds. The chaos and confusion of that fateful night can only have been amplified for a number of the residents who were not able to understand the instructions issued by the emergency services at the time.

A week or so after the Grenfell fire, Emma Dent Coad MP and Mark Simms, director of the P3 charity, met with residents to provide information on the financial support that they could expect and how to access it, as well as who to speak to for housing and legal advice. Unfortunately, the meeting failed to take into account the diversity of the various residents’ linguistic backgrounds. Many of those present could not understand the information being delivered, nor could they raise their concerns to officials due to the language barrier. The presence of translators and interpreters at the meeting could have made a huge difference to the level of community support that was intended.

Thankfully, some lessons were learned. The NHS, for example, rapidly translated support information into Arabic, Bengali, Farsi, Somali and Urdu to assist in providing practical advice to those impacted by the Grenfell tragedy

Last year, another horrific event showed just how valuable translation is in supporting those affected by a tragedy. On 12 June 2016, security guard Omar Mateen killed 49 people and injured 58 others at Pulse nightclub in Orlando, Florida. The shooting took place on Pulse’s ‘Latin Night,’ which meant that most of the victims were of Latin American descent.

While holding hostages within the nightclub bathroom, Mateen made a call to Orlando’s News 13, speaking in rapid Arabic. Meanwhile, many of those who escaped the club spoke in Spanish. The perpetrator’s father later released a video speaking about his son’s actions in Dari.

Around 80% of the population of America speaks English, 12.4% speak Spanish with the remainder speaking a broad spectrum of Indo-European, Asian, Indo-Pacific and indigenous languages. Following the Pulse shooting, translation was essential in helping the families of many of the victims communicate with the local police. Pulse patron Eddie Meltzer, who had left just minutes before the shooting, was praised for his role in volunteering to translate for relatives of the victims who were unable to communicate with the authorities. In instances like this where the demographic of people involved is quite broad, translation services act as a vital bridge between victims, witnesses, emergency services and government agencies.

One of the most widespread crises of recent times has been caused by the war in Syria and the resulting exodus of refugees. The United Nations estimates that more than 6 million Syrians have been displaced within their country, while 4.8 million have fled to locations beyond the Syrian border.

Providing information and services to so many traumatised individuals presents incredible challenges. Translation for the purposes of community communication plays an essential role in improving those individuals’ lives. Not only does it ensure necessary information is communicated to refugees who have escaped Syria, but it also allows them to begin speaking of their experiences. Translation has been key for aid workers and others seeking to help the refugees in both practical and psychological terms. Additionally, translation and transcription services have long provided support for refugees settling and integrating into new countries and cultures.

The role of translation in preventing a crisis

While some tragedies are simply impossible to prevent, whether born of a natural disaster or the direct result of human actions, it is possible to use translation to help prepare for certain scenarios. Local authorities can take advantage of fire safety translation services, for example, to ensure that all of their tenants know what to do in the event of a fire. Health and safety translation of this nature costs little but can have hugely beneficial consequences. Even a simple translation of information about how to call the emergency services and what information you will be asked for when calling has the potential to save lives.

The role of translation during a crisis

Translation and interpretation services can be key to saving lives. Even if you do speak a second language relatively well, there’s nothing quite like the intense panic and distress of a crisis to snap your brain back into your native tongue. This is an especially important consideration in the heat of the moment if small details could influence an event, you want the margin for error to be as small as possible when deciding how to act on the information you are given.  During a crisis, translation can help the emergency services provide those affected with clear instructions on what they need to do and where they need to go. It can also help those impacted by the crisis to pass vital information on to emergency services personnel at the scene. For example, if a witness is trying to provide a description of an assailant but can’t communicate that to the police, vital information could end up being overlooked. Having someone available to translate has the potential to save lives in many different kinds of crisis situation.

The role of translation after a crisis

In the immediate aftermath of a crisis, translation’s importance is again clear. It can help with practical matters like community communication, allowing the authorities to deliver advice and guidance to those the crisis has impacted. Whether it’s information on clothes banks, how to access housing, where and when meals are available or how to access clean water supplies, delivering information in an individual’s native language can make a massive difference.

Nor is the role of translation simply a practical one concerning matters of health and safety. Translation is also key to providing psychological support to those who have lived through a crisis. Reducing the feelings of isolation by allowing victims to feel heard, supported and understood in the immediate aftermath of an event can make a huge difference to their ability to cope in the longer term with what has happened to them. Many of those who experience trauma will require ongoing support to help them deal with the experience. Translation can help those affected to know where to find that support and when and how to access it. The NHS’s information on coping with major incidents is an excellent example of this.

Translation can also play an important role in helping to bring a community together following a crisis. Community relations can become strained after events such as terrorist attacks. Ensuring that all those affected have access to the same level of information and support, regardless of their native language, can foster a great sense of community spirit. Community communication of this nature can help to build bridges and has significant cultural implications in terms of community integration.

It is often observed that those who go through a crisis together form bonds that are stronger than those formed under other circumstances. The victims of the 2005 London Tube and bus bombings, despite their utterly diverse backgrounds, ages and lifestyles, remain in contact as part of a support network that was formed in the aftermath of the tragedy. Many of them have nothing in common other than having been on London’s public transport system at that particular moment, yet the impact of the crisis endures in the bonds that it forged between them.

When a crisis strikes, it takes no account of the victims’ linguistic backgrounds. Crises don’t discriminate based on language. That’s why it’s so important that our response to them doesn’t either.