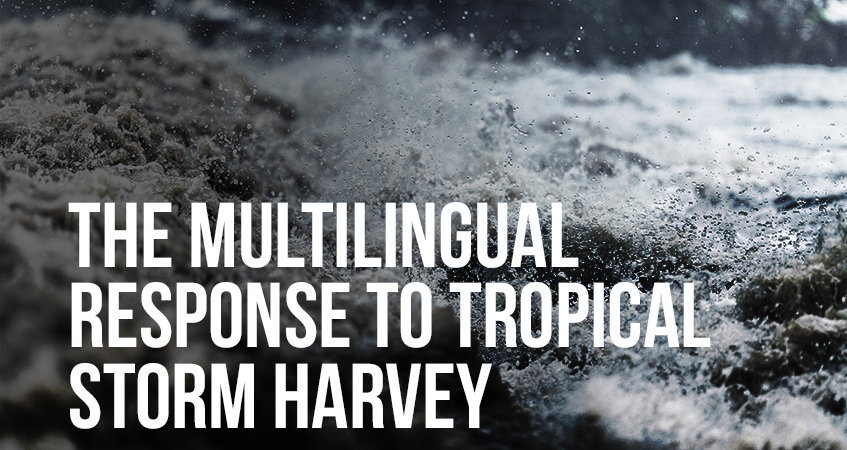 A few weeks ago, Jonny wrote a post about translation’s role in times of crisis. And now, unfortunately, there’s another example to add to the list: Tropical Storm Harvey.

This storm has dumped unprecedented amounts of water on the US city of Houston, Texas. It’s turned freeways into rivers and low-lying residential areas into lakes. So far,  at least 38 people have died. And at least 30,000 have had to abandon their homes for shelters due to rising flood waters.

Relief and rebuilding efforts are going to take years . . .  and since Houston is such a diverse city, they’ll have to be multilingual. Here’s how translation has been and will be needed to help Houston recover from the impacts of this devastating storm.

The many languages of Houston

Houston residents speak more than 145 different languages. New York and Los Angeles are the only two American cities that beat Houston for linguistic diversity. According to Census data released in 2015, over 1/3 of Houstonians past the age of 5 speak a foreign language at home. Aside from English, the commonly spoken language is Spanish.

Of course, many of these people do speak English as well, with varying degrees of fluency. But during and after a crisis, it’s important to ensure, as much as possible, that people have access to information in a language they can easily understand.

In general, the Trump Administration has made a point of offering information in Spanish grudgingly, if at all.  The Obama-era White House had a Spanish-language website, but it was taken down after Trump was inaugurated. It’ still not up, and the Spanish-language Twitter feed is only half in Spanish and riddled with errors.

Fortunately, Houston’s local government understands the importance of translation during crisis situations. Houston’s Mayor, Sylvester Turner, routinely issues statements in both English and Spanish on his Facebook page. So does Tom McCasland, director of the Housing and Community Development Department of the City of Houston.

And when it comes to ensuring that everyone has access to emergency help like shelters, the obstacles are not strictly linguistic. Houston is home to about 575,000 undocumented immigrants.  A new law targeting them goes into effect on Friday, and many undocumented immigrants were afraid that they would be asked to show immigration papers if they tried to seek help from the shelters set up around the city.

The mayor issued a statement debunking the rumor on Facebook, in 6 different languages: English, Spanish, French, Vietnamese, Chinese and Arabic.

He also promised to personally defend anyone facing deportation for seeking help during the flooding:

“There is absolutely no reason why anyone should not call. And I and others will be the first ones to stand up with you,” Turner, an attorney, told reporters on Monday. “If someone comes and they require help and then for some reason [someone] tries to deport them, I will represent them myself.”

Right now, the main focus of relief efforts appears to be ensuring people are safe and dry. That’s as it should be.

And some multilingual help is already available for Harvey victims.  For example, the State Bar Legal Association is offering answers to basic legal questions in English, Spanish and Vietnamese. TV announcements from the city government have included both ASL and Spanish sign language interpreters, and ASL services are available at the shelter set up in the George R. Brown convention center. Meanwhile, Portlight Strategies is (among other efforts) attempting to ensure that deaf and hard of hearing individuals have access to sign language interpreters elsewhere in the city.

That said, some Harvey victims are undoubtedly going to need even more language help as they navigate the bureaucracy required to rebuild their lives.

For example, have you ever felt like you needed a translator to understand your insurance policy? Property/casualty insurance has a language all its own, and it can be difficult for even native English speakers to decode.

If you’d like to help right now, NPR lists a number of ways to do so here. Please do be mindful to research charities before giving.

The Independent also suggests that those with “Spanish, Vietnamese, Arabic, and American Sign language skills could be of use to relief organisations, hospitals, radio stations, other local media outlets, and first responders – paramedics, police, fire departments. It is best to call officials and groups in the area first to determine need. “