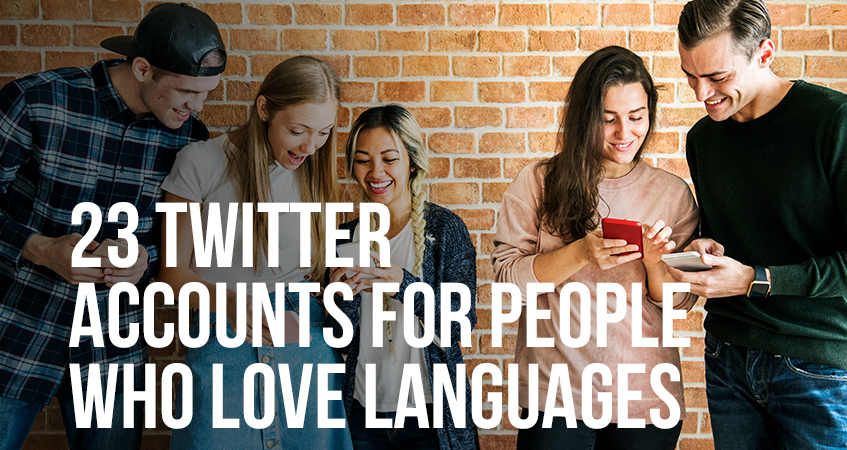 Do you tweet? The best thing about Twitter is how easy it is to keep track of your interests. At the same time, there’s so much going on that it can be overwhelming trying to figure out which accounts to follow.

So, let us help you out. Here are 23 Twitter accounts for people who love learning about languages or who want to keep up with what’s going on in the language services industry.

This section is for accounts that focus on languages and language trivia. So, follow them all, make your Twitter feed less boring, and learn some cool facts in the process.

Why follow? The popular online dictionary has an equally popular Twitter account. Follow them for obscure word definitions, words in current events and cheeky word-related humor. They are staunch defenders of the idea that words mean things, even when they’re coming from the mouths of politicians.

Refugee: a person who flees for safety, especially to a foreign country, in a time of political upheaval or war.https://t.co/aaGLUCHnCU https://t.co/1NwFJRqM1V

Why follow? To improve your vocabulary, of course. Every day, the OED tweets a “Word of the Day,” and they’re almost always worth at least $5.00.

Why follow? To keep up with the latest news on indigenous and minority languages.

Follow them for: Fun facts about language and language learning

Attention gelato lovers! If you’re in #Italy and want some local #gelato, you’ll need to start by asking for a ‘coppa’ or ‘cono’. pic.twitter.com/jjrsBxnCvk

Ljubljana is the capital of Slovenia. It is called Lubiana in Italian, Liubliana in Spanish, and Laibach in German.

Why follow? Keep up with the adventures of Fluent in 3 Month’s Benny Lewis (see our interview with him here), plus information about languages and how to learn them.

A shout-out to linguists… while also making it explicitly clear that I’m not one. Let’s not steal titles away from accomplished academics! https://t.co/UA0P7bBS7r

Why follow? Because you’ve always wanted to know the meaning of words like “foop” and “drizzle-drazzle,” haven’t you?

Happy Friday! To FOOP is to dance uninhibitedly. #fooplikenooneswatching

Why follow? Obscure words and cool facts about them.

A WATER-DOG is a small, grey, low-level cloud supposed to forecast rain.

Why follow? Ben Zimmer is a linguist who writes a column for the Wall Street Journal. Follow him for insights on how English is evolving, word histories and more.

Is “reaccommodate” the Euphemism of the Year? This @TIME piece quotes @wordlust and me on euphemistic language. https://t.co/zSaPR46hAF

Why Follow:  Learn new words and new facts about them, plus see what other people are looking up.

????Lookups for ‘armada’ are spiking after Trump used the word to describe a U.S. Navy strike group. https://t.co/AzjBvwLGWX

Want to keep up to date with what’s going on in the world of translation, interpretation, and localization?

Why follow? A really interesting, well-curated feed on languages and translation from Nova Languages, a New York language agency.

The origins of an ancient fairy tale — from proto-languages to all of the modern languages https://t.co/CZS9pqgrPl via @DiscoverMag pic.twitter.com/pqKcfbEkoq

Why follow? The latest industry-related news and updates from MultiLingual Magazine, a language industry staple for the past 30 years.

Why follow? The Twitter feed for MultiLingual Magazine’s marketing director is filled with interesting and helpful information for translators and the businesses who use their services.

Why follow? An excellent source of interesting stories about languages and translation.

Why follow? The latest independent market research on translation, localization and global businesses.

We talked to 3 companies in the budding market for “hearables.” Read about it here: https://t.co/GN1prLTB0S

Why follow? An excellent stream of industry-related news from both the Slator website and around the Internet.

22 languages, 720 dialects: and huge opportunities if you know how to reach India’s next gen of mobile consumers https://t.co/4nnJxsCGZc

Why follow? Observe the evolution of our new robot overlords! This account features translation industry news and analysis, with a special focus on machine translation.

Translating with Cerebral Machines: Where Can It Take Us? https://t.co/gg3cgJfkFM

Why follow? Information on industry news and events from the European Language Industry Association.

The next Elia Exchange Forum takes place in Maribor, Slovenia on 21/04 and is all about quality. If you’re an Elia Member, DM to join us pic.twitter.com/07iU6DkoPN

Why follow? Another great feed full of information on world languages and the translation industry.

Why follow? HubSpot’s VP of International Operations and Strategy is an excellent source for information on global marketing and international business expansion.

Why follow? Fun articles about languages and helpful information for translators.

“A serious agency will act as a buffer or filter between you and the end client.” Via @ITTranslator https://t.co/dK9rA3XqZg

Of course, we’d love it if you gave us a follow, too: @K_International

And I’m sure I missed some great accounts, so feel free to recommend them in the comments.

2 thoughts on “23 Twitter Accounts for People Who Love Languages”