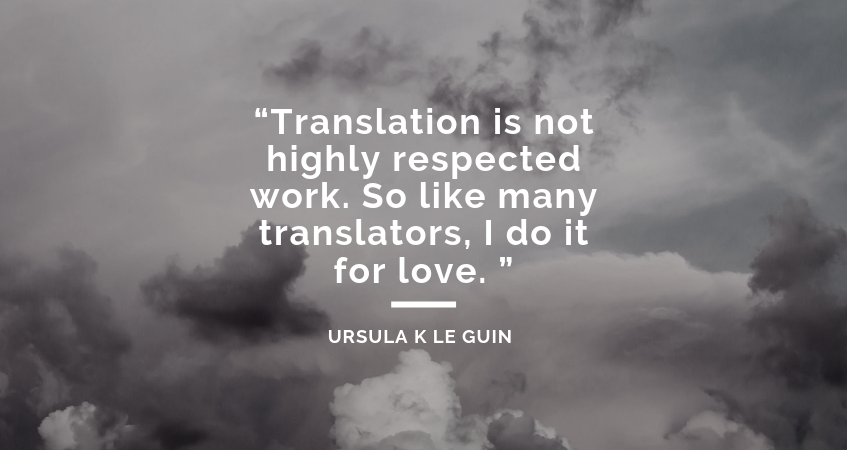 American writer Ursula K. Le Guin died on Monday, 22 January 2018. She was best known as a fantasy and science fiction author, of course. But did you know she was a translator, too? Before her death, she had four published translations to her name:

Le Guin loved languages:  writing, playing with words, translating and inventing new ones. She wasn’t merely a powerful storyteller; she also had an incredible insight into the nature of language and communication. With that in mind, here are ten quotes from Ursula Le Guin for translators and language lovers alike to enjoy.

Ursula Le Guin on how writing relates to translation:

“Translation is entirely mysterious. Increasingly I have felt that the art of writing is itself translating, or more like translating than it is like anything else. What is the other text, the original? I have no answer. I suppose it is the source, the deep sea where ideas swim, and one catches them in nets of words and swings them shining into the boat… where in this metaphor they die and get canned and eaten in sandwiches.”

On what makes a good translator:

Willingness to research is sometimes essential to producing a good translation:

“My Danish translator, I don’t know Danish, but he’s wonderful.  He writes me long lists of “What does this mean?” or “Is that a joke?” and I know that I have good translations in Danish, because of the correspondence with the translator.”

On the difficulties of life as a translator:

“Essentially, it is a thankless job, translation. It’s very badly paid, and you don’t get much credit for it.”

This is true, at least for literary translators. For more on that, see Literary Translators: Unsung Heroes of the Literary World.

“Translation is not highly respected work. So like many translators, I do it for love. ”

What it takes to be a literary translator:

“You have to fall in love, I think, to do a long translation. Yes, and then it’s fun.”

For more on literary translation, see  The Challenges of Translating Literature.

On the importance of storytelling:

On the complexity of communication:

“In most cases of people actually talking to one another, human communication cannot be reduced to information. The message not only involves, it is, a relationship

between speaker and hearer. The medium in which the message is embedded is immensely complex, infinitely more than a code: it is a language, a function of a society, a culture, in which the language, the speaker, and the hearer are all embedded.”

I would argue that is also true, to a lesser extent, of written communication. It’s not just about words and pictures. The reader brings cultural and linguistic expectations of their own that can influence the message they get from the text. This one of the reasons that translation and interpreting are so much more difficult than it seems to an outsider.

On how writers use words:

“A writer communicates in words, through words, using words to communicate things which often cannot be said directly in words, have to be said indirectly.”

Good translators manage to translate both direct and indirect meanings into a new language and culture.

“There just are a bunch of us who love to invent languages as well as to learn them. A lot of kids do a certain amount of it, and some people carry on all their lives. It’s like kids who draw maps of imaginary islands, you know?”

On the power of knowing the right words:

“For magic consists in this, the true naming of a thing.”

That’s quite profound when you think about it.

Were you an Ursula K Le Guin fan? If you weren’t before, are you on your way to becoming one?

Share your favorite Le Guin stories and quotes in the comments!