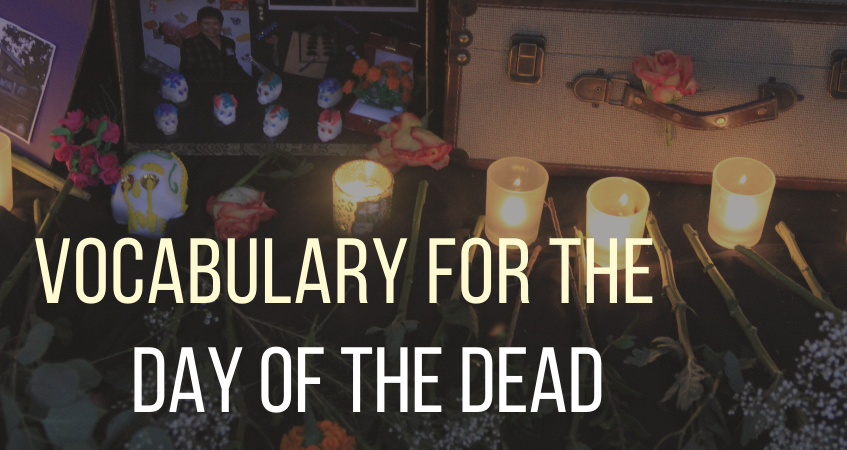 Right after Halloween, on November 1st and November 2nd,  Day of the Dead, or El Dia de los Muertos, is celebrated throughout Mexico and Latin America. Unlike Halloween, where traditional activities like dressing up in costumes stem from an attempt to protect the living from the dead, traditional rituals on El Dia de los Muertos are intended to welcome dead friends and relatives.

On these two days, the spirits of the dead are said to be able to visit their families again. The first day of the celebration, November 1st, is for dead infants and children. The second day is for adults. To mark the holiday, families clean and decorate the graves of their loved ones, prepare special foods to give as offerings, and often spend the whole day and even the night at the cemetery.

Here are some of the words associated with the Day of the Dead:

El altar de la ofrenda: An altar decorated with candles, religious symbols and special Day of the Dead foods. These are presented as offerings to the deceased, though they are later consumed by living family members.

El cempasúchil: The Mexican marigold, often referred to as el flor de los muertos, or “the flower of the dead.” It is used to decorate altars and gravesites for the holiday.

La calavera: “Calavera” means “skull.” Skulls are the most prominent symbol of the Day of the Dead, and depending on context, “calavera” might refer to little skulls made of sugar (cavaleras de azucar) and given as gifts or offerings. It may refer to figures of skeletons used for decoration, such as La Calavera Catrina, a skeleton dressed as a rich noblewoman. It might also refer to short, witty epitaph-style poems composed for friends or relatives.

El pan de los muertos: A sweet bread, rich with egg, that is offered to the dead and then eaten.

La iluminación: A candlelit ceremony to help guide the spirits of the dead back to their graves.

La danza de los viejitos – A dance performed for the Day of the Dead in the Michoacan region of Mexico. For this dance, the dancers dress up as old people.