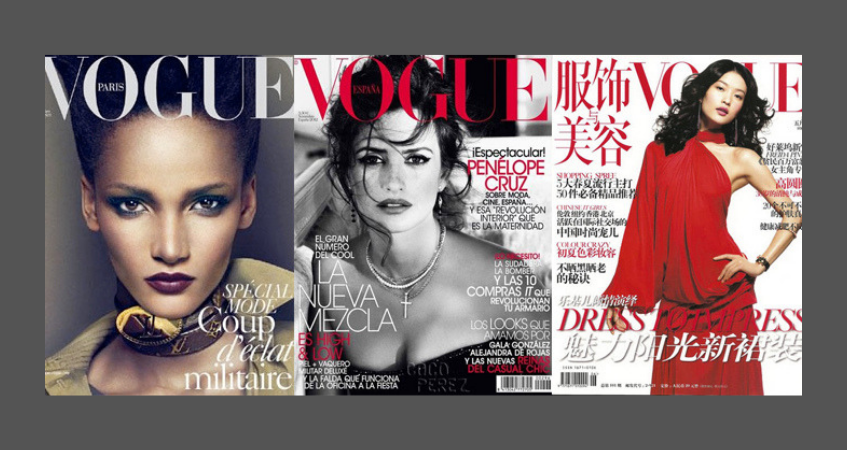 Almost two centuries ago, in 1892, Arthur Turnure came up with a great idea and decided to publish a weekly newspaper in the United States named Vogue, little did he know that Vogue would go on to become perhaps the world’s definitive fashion publication. In this article, you’ll find out how Vogue began and went on to successfully leverage language, advertising and regional targeting to ensure its brand is recognised around the world. 2016 marks Vogue’s debut in one of the few regions it has yet to conquer and there’s no sign of its international influence dwindling in future, read on to discover more.

The History of a Global Fashion Icon

The first issue of Vogue was published on December 17 of that same year. The cover price of the time was 10 cents, which was equivalent to $2.64 in 2015. Turnure wanted this new magazine to celebrate the “ceremonial side of life,” the one that can attract “the sage as well as debutante, men of affairs as well as the belle.” Even though the earliest editions of Vogue were primarily concerned with fashion, Turnure made sure to cover sports, as well as social affairs to attract the male readership.

In 1905, a year before Turnure’s death, Condé Montrose Nast bought Vogue and started growing the publication gradually. A weekly magazine became bi-weekly, and in the 1910s Vogue started spreading overseas. Vogue, a brand that targets an elite audience, was not only a local magazine anymore.

Even though the beginning of 20th century is marked by World War I, that did not stop the Vogue brand from garnering a reputation that it maintains even nowadays. In 1916, at the height of World War I, Nast started Vogue in Britain, followed by Vogue in France in 1920, where the magazine was well received. Under Nast’s management the profit increased dramatically, and the reason why is pretty clear. The larger the audience of a magazine is, the more profit it will earn.

The magazine which started as a periodic US publication was slowly spreading over Europe. First French cover of Vogue was issued in June 1920. Vogue was launched in Australia in 1959, followed by Italian Vogue in 1965, and L’Uomo Vogue in 1968. Condé Nast International began publishing in Brazil in 1975, in Germany in 1979, Spain in 1988, Russia in 1998, Japan in 1999, and Vogue entered the Chinese market in 2001.  Condé Nast India was established in 2007.

Ever since Vogue came under the ownership of Condé Nast, the company made sure to attract the world’s greatest editors, photographers and creative directors for all the different international editions. By dedicating time and effort to every local language edition, Vogue has managed to reflect the social and cultural changes shaping the twentieth century. An overall global campaign became possible because of the fashion specialists recruited to deliver international stories and adapt to language specifically suited to local populations.

In 2014, Tadashi Yanai said, “Global is local, and local is global.” And just like the fashion designers and retailers of today understand this concept, it seems that Vogue understood it a long time ago. In order to become a great global company, Vogue was determined to become a great local company first, so they could touch every single person in a certain area.

Advertising through powerful magazines like Vogue is one of the most successful ways of getting product recognition, worldwide. Vogue itself is utilized by many prestigious luxury brands and a proven method of reaching decision-makers and opinion leaders with a high-income all around the world. An advertisement in a highly-influential magazine such as this one offers opportunities to target an individual region’s audience in an uncluttered environment with inspiring localised advice, insights, and a host of fascinating features.

The key to the effectiveness of advertisements in Vogue Magazine is constant, repeated exposure.
This allows a brand to reach a large number of people with one copy. For example, many businesses and homeowners have Vogue stacked in their magazine racks where they are referred to and read repeatedly. An ad in a timeless magazine like Vogue becomes timeless itself. However, it is important that the ads remain related to the themes presented in the magazine.

There are several ways in which Vogue delivers international ad engagement:

Even though English is the fashion industry’s lingua franca, it is not enough. 2016 marks the year when the East and the West that seem utterly divided, will finally become united by the language of fashion. Condé Nast announced that Vogue Arabia, the first Vogue for Middle Eastern readers would launch in October 2016. And, the most ground-breaking news is that this history-making publication will be helmed by no one other than the Saudi Arabian royalty, Princess Deena Aljuhani Abdulaziz. The launch of Vogue Arabia is a big deal for the Middle East, but also for the rest of the world.

Even though we call Anna Wintour the Queen of Fashion, HRH Princess Deena Aljuhani Abdulaziz wed into her royal status. This mother of three is a fashion woman indeed. Even Christian Louboutin has recognized her stylish nature and named a shoe after the Princess. Deena Aljuhani Abdulaziz is 41 years old, wears her hair in an Eighties New Wave style undercut at the sides, and the multiple piercings in her ears are pinned with small glittering studs by Sophie Bille Brahe and Monique Péan. She describes her look as suitable clothing worn in a super-stylish way.”

But, don’t let her royal status mislead you. This royalty runs D’NA, a fashion business comprised of two members-only stores and a Farfetch.com affiliation. In the stores, shoppers can find everything from brands like Miu Miu and Haider Ackermann to M2Malletier. In addition, Abdulaziz has a tendency of discovering and nurturing design talent. Do Prabal Gurung, Jason Wu, Mary Katrantzou and Erdem ring a bell?

In the Persian Gulf, there has been a rise in demand for couture. Even though Dolce & Gabbana launched its first collection of abayas (robe-like dresses) and hijabs, and Valentino sells full-length gowns that are tailored to the region’s style, the ultimate fashion guideline was missing.

Vogue Arabia is finally an opportunity to challenge all the misconceptions of the area. Editor-in-Chief Abdulaziz wants the world to know that Arab women are no different than others around the globe; they want to look beautiful. Despite showing all the current trends, Vogue Arabia will also include the Fashion Fund – a competition that will help young rising designers. The winner of the competition will receive an award of $250,000, which goes towards building a fashion brand and a name in the business.

The new Editor-in-Chief also wants to promote the status of women in their conservative society. The fashion magazine will reach a vast number of women in countries, including Bahrain, Kuwait, Oman, Qatar, Saudi Arabia, and the United Arab Emirates, not only showcasing their diversity in culture, race, and beliefs but also giving them a voice. “We have a long history of accomplishments—though those stories don’t surface often enough,” says Abdulaziz. “Vogue Arabia will play a role in elevating these stories to the global stage.”  She says, “Vogue Arabia will be a love letter.” And we couldn’t be more excited to read it.

A decade ago, chief executive of Conde Nast International reportedly wrote in an email “Our company has no wish to impose its values on a society, which does not fully share them. And we do not wish to provoke a strongly negative, even violent reaction. So I will simply avoid it by never entering the market. And I will sleep better at night.” Apparently, never ends now with the help of Abdulaziz. Even though she knows that it won’t be an easy task to bring a Western publication like Vogue in a non-Western territory, she is determined in her intentions to showcase the beauty of Arabian women to the rest of the world.

Vogue Arabia will first launch a website in Arabic and English to develop insight into its audience. Then, the dual language website will be followed by a print magazine in spring 2017.

In order to prepare yourself properly for the launch of Vogue Arabia, you might want to check your vocabulary. Pronunciation of read-it-but-never-said-it designer names from the fashion industry has always been a challenge for some of us, you wouldn’t want to make a language faux pas in this industry after all.

Even though all these brands are pronounced the same way everywhere in the world, there are still so many fashion-related terms that are not always as easy to translate. In order to make sure that language barriers never get in the way of your retail business achieving international success, contact K International today.