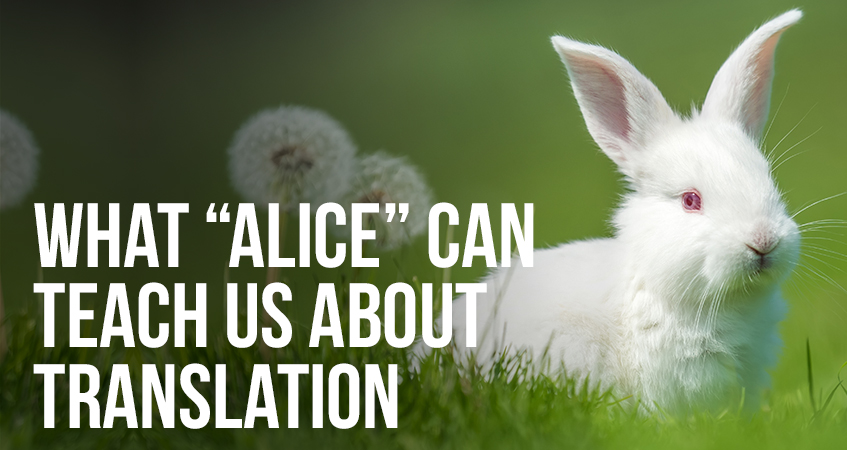 Did you know that Alice in Wonderland is the 2nd-most-translated English novel ever? It’s been translated into 174 languages, from Afrikaans to Zulu. Only The Pilgrim’s Progress has been translated more times.

Alice in a World of Wonderlands, a new book that came out over the summer, brings together 140 of these translations, including back-translations of certain chapters. Readers are invited to compare, contrast and generally geek out over all the different versions of a familiar story. What can this teach us about translation and localisation? Read on to find out!

Sometimes, a rose by any other name actually smells more sweet. Choosing a familiar name can help both protagonists and brands alike appeal to local audiences. As her story is translated into different languages, “Alice” doesn’t always stay Alice.  Some translators choose a local name instead. Here are some examples:

Deciding whether or not to localise a company or product name can be difficult. If you’re already well-known internationally, you may decide to just localise the spelling. Or, you might not want to change anything.  That said, even some of the world’s largest brands market themselves by different names in different countries.  This article from Business Insider has some excellent examples.

Humour Sometimes Gets Lost in Translation

Humour is one of the hardest things to translate. The jokes, puns and Victorian satire in Alice in Wonderland have been bedevilling translators for the past 150 years.

For example, in 1866 Lewis Carroll wrote to his publisher, saying ““Friends here [in Oxford] seem to think that the book is untranslatable into either French or German: the puns and songs being the chief obstacle.”

That said, a good translator can often come up with a solution that is simply inspired. According to Smithsonian Magazine, when translating the story of the mouse’s tale:

An early Gujarati translator managed to capture the tail/tale pun for readers of that western Indian tongue. When someone talks incessantly, it is often conveyed through the Gujarati phrase poonchadoo nathee dekhatun, which means “no end in sight”—allowing the translator to play on poonchadee, the word for “tail”, with poonchadoo.

As a translation expert, the Emer O’Sullivan told Smithsonian Magazine, “All translations are adaptations.”  Translators can’t and don’t always aim to translate word-for-word. Translating the overall experience, message and impact of a piece of content are more important. How does this work in real life? Take a look at these “back translations” of the Mad Hatter’s tea party scene in Alice in Wonderland.

“Twinkle, twinkle, little bat! How I wonder what you’re at!

Up above the world you fly, Like a tea-tray in the sky. Twinkle, twinkle–“‘

It’s a nonsense version of a traditional English nursery rhyme. How do you translate that for people who have never heard “Twinkle, Twinkle, Little Star?”

As the Smithsonian points out, you have two options:

Here’s how foreignisation looks in action:

O parrot, o parrot!
How green are your feathers!
You’re not only green in times of peace,
But also when it snows plates and pots.

Different types of content demand different translation strategies. It’s not uncommon for businesses to try to get away with using a “free” machine translation solution like Google Translate. But do you want to trust a machine to pick your strategy? Not a good idea! The translation is about more than substitution. If your content is at all complex, you need a professional to sort through these issues and make it understandable and accessible to your target audience.

Some of the translators who took on Alice in Wonderland were not up to the challenge. One Finnish translation was apparently so bad it was banned. Not for being offensive, mind you – just for being incomprehensible!

Which brings us to the final lesson Alice in Wonderland can teach us about translation: choose the right translator.  Look for someone accredited, experienced and ethical. The right translator for you will have experience in your industry, and a solid quality-control process to catch mistakes before they reach your customers.

Interested in the book that inspired this post? Got £ 193.85 burning a hole in your pocket? You can order the three-volume set direct from Oak Knoll Press.  If you’re in New York, there’s also an exhibit based on the book at the Grolier Club through 21 November.

Know of any other cool books or exhibits about translation? Share them in the comments!

Previous Post 5 Languages Spoken in Surprising Places
Next Post International Expansion: 5 Lessons You Can Learn From the World's Biggest Businesses