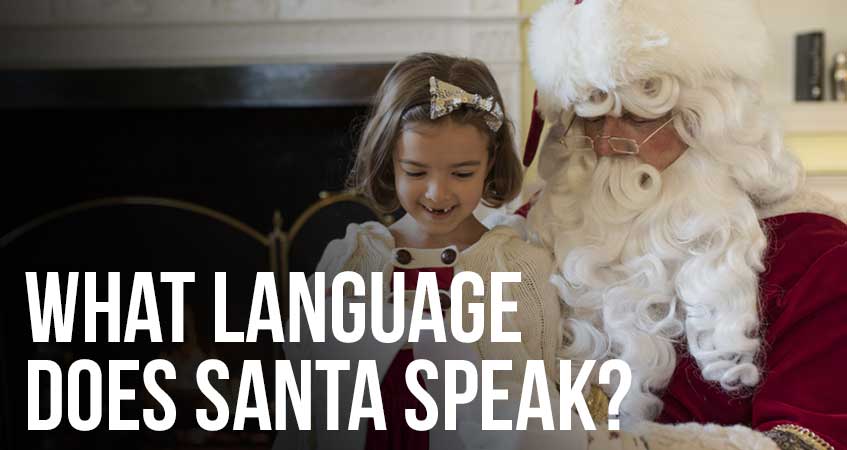 Santa sends toys to children all over the world, or so the story goes. But what is his native tongue? Where does Santa live, and what language does Santa speak?  Since we can’t ask the big guy himself, let’s take a look at the evidence. Here, we examine some of the possibilities.

Every kid knows that Santa lives at the North Pole. But where is that, really? In real life, the geographic North Pole is a barren wasteland of sea ice in the Arctic Ocean. It would be quite difficult to set up a workshop, and feeding all of those reindeer would take significant expense and trouble.

And in a couple of generations, there might not be any sea ice at all. Santa would need an underwater workshop!

The nearest inhabited area to the geographic North Pole is the Qikiqtaaluk Region of Nunavut, Canada.

But the geographic North Pole isn’t the only “North Pole.” For example, there’s also the North Pole, Alaska, where you’ll find Santa Claus House. Santa Claus House is an old trading post turned into a Christmas gift shop that also issues “letters from Santa” to children around the world.

Obviously, if North Pole, Alaska were Santa’s headquarters, he would speak English. Or possibly a native Inuit language- if he’s immortal, that would mean he was there before the Canadians and the Americans showed up, right?

Of course, the Santa Claus we know and love today is loosely based on a real historical figure, Saint Nicholas of Myra. But the original St. Nicholas lived nowhere near any of the places that we now refer to as “The North Pole.”

The real St. Nicholas was born in Lycia, in what is now part of Turkey. At that time, Lycia was a Greek-speaking, and he would have spoken Greek.

The North Pole is only one rumoured location for Santa’s super-secret base of operations. Lapland, the Finnish homeland 0f the Sami people, also claims to be the “real’ home of Santa Claus. (Lapland is a region that encompasses Finland, Sweden, Norway and Russia, but he’s usually assumed to live in the Finnish part.)

Here’s the backstory: In 1927, Finnish radio broadcaster  Markus Rautio told his listeners that Santa’s Workshop had been discovered in Lapland. The idea stuck, at least among the Finnish. In the 1980s, “Santa tourism” came to the area, a golden opportunity for the Finnish town of Rovaniemi.

Fun fact: When Rovaniemi was rebuilt after World War II, it was built in the shape of a reindeer’s head.  Now, it home to the Santa Claus Village post office and amusement park. If you’re lucky, you might meet the big man himself there!

There are also some who say Santa is actually a Christianised version of a Sami shaman, with his red and white suit echoing the colours of the psychedelic amanita muscaria mushroom. Didn’t you know that’s what makes the reindeer fly? Far out, man. Here’s an article that explains this theory in detail. There are some interesting coincidences. On the other hand, maybe the anthropologists involved were on mushrooms themselves.

If Santa actually lives in Lapland, he probably speaks Finnish or Sami. If he’s really a shaman, he would definitely speak Sami.

How Santa Got His Reindeer

If nothing else, Lapland is definitely where Santa got his reindeer from.  Originally, he travelled on horseback. But in 1822,  Clement Clarke Moore’s poem “The Night Before Christmas” introduced the public to “8 tiny reindeer.”

At that point, a group of Sami herders had recently moved into Alaska, reindeer in tow, in a bid to introduce Alaskan Inuit to reindeer herding. (Traditionally, the Inuit hunted whales. Reckless commercial whaling had left them starving).

And in 1926, an Alaskan businessman named Carl Lomen began placing Santa and his reindeer in Christmas parades and Christmas displays across the country. His motivation? To encourage a market for reindeer meat and reindeer fur.

But maybe Santa doesn’t live in Lapland at all. In Norway, they believe he lives in the small town of  Drøbak. As the town website explains:

Santa Claus was born beneath a rock in Vindfangerbukta north of Drøbak several hundred years ago. That’s a well known fact in Drøbak, and the reason why Drøbak is the Christmas Town above all others.

There is some evidence that bits of the Santa Claus legend was inspired by the Norse god Odin. Like Santa, Odin has a long white beard and was associated with pre-Christian Yuletide celebrations, sometimes entering homes through the chimney and leaving gifts behind. Odin’s horse, Sleipnir, has 8 legs. Santa has 8 reindeer.

So, if Santa is Odin in disguise, he probably speaks Norwegian, or even Old Norse (which means Icelandic would be the closest living language).

Does Santa Live in Greenland?

In Denmark, they say that Santa Claus lives in Greenland. And in 2003, the 40th annual Father Christmas World Congress agreed.

If he lives in Greenland,  he would probably speak Greenlandic, a native language spoken by 57,000 and related to other Inuit languages in Canada.

So what language does Santa speak? He’s magic, so probably all of the above and then some. Or maybe he just has an excellent translation team!

Want to learn more about Santa Claus around the world?  Read Who is Santa Claus? and learn how yo say Santa Claus in Different Languages.

What language do YOU think Santa speaks? And where do you think he lives? Let us know in the comments!

5 thoughts on “What Language Does Santa Speak?”