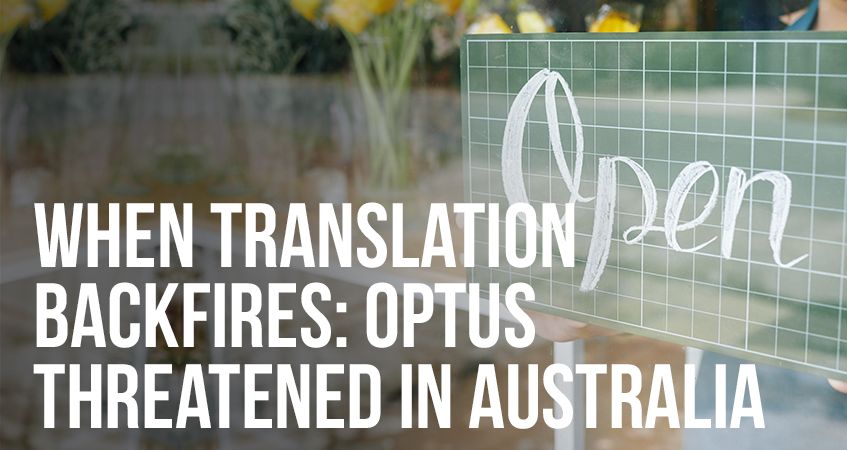 Speaking your customers’ language is always a good business strategy. However, as Australian telecom company Optus discovered recently, it can be a controversial strategy. The company had to remove Arabic language signs from some locations after a barrage of Facebook complaints and threats against staff.

Starting on November 16, Optus’ Facebook page received numerous comments complaining about Arabic advertisements the company had posted in the mall in Casula, near Sydney.

“What’s with the Optus, Casula shopping centre advertisement board, not one word or English on it? Very poor taste considering the weekends events. Your advertisement people would be looking for new jobs if I was running the show!”

Because apparently for some people the Arabic language equals “terrorism.” Obviously, the ads themselves had nothing to do with terrorism. They merely let Arabic-speaking customers know that there were Arabic-speaking employees at the Optus store.

The ads made good business sense. Mobile phone plans can be complicated. When details get lost in translation, customers end up unhappy. According to Buzzfeed, 10.5% of people living in the Casula area speak Arabic at home. As Optus explained to the Sydney Morning Herald,

“In some communities, we actively promote the bilingual skills of our front-line staff. We recognise that sometimes customers find it easier to understand the detail of a phone plan when it’s explained in their first language.”

The Optus social media team made a valiant effort to explain this to the Facebook mob, but the complaints continued.  One woman called the ads (or perhaps the Arabic language itself) “camel spit.” Another asked, ” [W]hat about the other nationalities that live at casula… Specially us english speaking people. Oh and my neighbor who is indian.”

Several threatened to cancel their service, or claimed to have already done so.

Threats Lead to Removal of Signs

Unfortunately, at some point complaints turned to threats. Optus, acting on the advice of local authorities, decided to take the signs down. The company told Buzzfeed:

“Optus remains committed to minimising and eliminating discrimination through our corporate culture, marketing activities, employment practices and interactions with the community. However, yesterday following a threat to our store staff, we made the decision to remove some materials that were published in Arabic. The safety and security of our staff is paramount.”

Throughout the controversy, the Optus social media team has been the epitome of grace under pressure. They calmly and kindly responded to complaints like the ones above, without resorting to censoring comments.

They even handled the unenviable task of explaining to one woman that “islam” is not a country.  One Linda Ashenden wrote that “This is Australia, not islam.” The company’s response was perfect:

“Hi Linda, thanks for your feedback. Australia is a country while Islam is a religion. The language used on the sign was Arabic which is also spoken by a number of non-Muslim countries.”

As a result, by the end of the day the tide had turned. The company was showered with praise from people who admired both its multilingual outreach efforts and its classy handling of the controversy. Commenters flocked to the Optus Facebook page to congratulate the company, as seen here:

Job well done on using signs in different languages. I think it’s a brilliant idea and it must be so heartwarming for…

Other websites gushed with headlines like “Optus Social Media Team Own The Internet With A+ Responses To Haters Of Arabic Language Posters.”

All in all, the initial controversy turned into a win for Optus.

Takeaways for Your Business

Sometimes, translation can be controversial. Making advertisements and other business materials available in other languages may offend other customers. This is especially true if you’re reaching out to minority communities. That doesn’t mean it’s not worth doing, especially if it will help you grow in new markets or keep customer service complaints down. Nobody likes to see their customers complain, but the truth is that you can’t make everyone happy all the time.  And while it obviously depends on your customer base, for every customer that complains there are probably many more who will stand behind you.

If someone does complain about your translation efforts, keep it classy. Try to educate the customer about what you’re doing and why you’re doing it. Don’t be rude, but don’t back down either (unless, as Optus did in removing the posters, you are following the advice of police or other authorities.)

What do you think of this controversy and the way Optus handled it? Let us know in the comments!

Previous Post International Expansion: 5 Lessons You Can Learn From the World's Biggest Businesses
Next Post The Different Types of English

0 thoughts on “When Translation Backfires: Optus Threatened in Australia ”