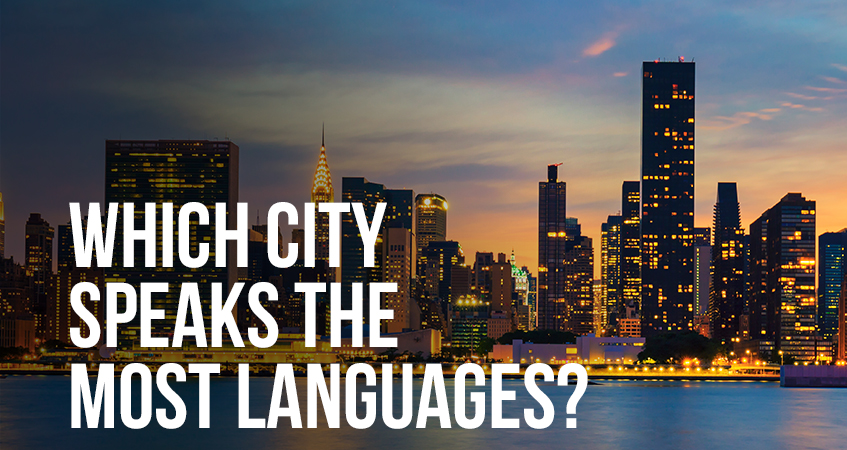 Which city speaks the most languages? It’s not London, nor any of the metropolises of Europe.  It’s actually New York City. This city of immigrants is also the most linguistically diverse city in the world. Want to learn more? Here are 7 interesting facts about New York City and its languages.

There are over 800  languages spoken in New York City.

For reference, the most linguistically diverse country in the world is Papua New Guinea, with 820 languages. New York crams almost that many into a single city. Nowhere else comes close. Even London “only” has around 300 different languages.

Queens is the most linguistically diverse neighbourhood in the entire world.

“The capital of linguistic diversity, not just for the five boroughs, but for the human species, is Queens,” according to Rebecca Solnit and Joshua-Jelly Schapiro’s  Nonstop Metropolis: A New York City Atlas.  Residents of Queens speak approximately 138 languages, according to 2000 census data.

It shouldn’t be surprising, then, that Queens also holds the Guinness World Record for the most diverse place on the planet.

The most common language in New York City is still English. But not by much.

According to Census data, just 51 percent of New Yorkers speak only English at home.  That said, 53.8% of those who speak another language in the home speak English “very well.” But that still leaves approximately 23% of New Yorkers who have trouble communicating in English. And the languages they do speak come from every corner of the globe.

Spanish is the second most common language in New York City.

That said, as Hispanic Research Inc points out, New York City is not a homogenous Hispanic market.  Depending on where you are, you could encounter communities of people from Mexico, Ecuador, Columbia, and more. Language and culture can vary between different Hispanic countries, too. So, businesses addressing Spanish-speakers in New York City have to be aware of these differences.

Chinese is the 3rd most common language.

While Mandarin is the most common Chinese language, other languages and dialects like Cantonese and Fuzhou are also well-represented.

New York City is a living library of endangered languages.

When you start looking at the uncommon languages of New York City, things really get interesting.  New York City is basically a living library of endangered languages,  from A (Aramaic) to Z (Zaghawa, a language spoken by some members of New York’s Darfuri refugee community).  In fact, it’s home to so many rare, dying tongues that linguists go there to record rare languages they can’t find anywhere else.

Daniel Kaufman, a linguistics professor at the City University of New York, has even created a program called the Endangered Languages Alliance to identify endangered language communities in New York City and attempt to preserve the languages they speak. As he explained to the New York Times in 2010,

“We’re sitting in an endangerment hot spot where we are surrounded by languages that are not going to be around even in 20 or 30 years.”

Entire language communities have migrated to New York City, taking their languages with them.

People come to New York City for all sorts of reasons.  All too often, they are fleeing war, or poverty, or persecution.  And sometimes, the communities they build in New York outlive the ones in their home country.

For example,  Gottscheerish is one of the most endangered languages in Europe. The original Gottscheerish stronghold was in Gottschee County, Slovenia. But the language will probably die in New York City.  In fact, there are more people who speak Gottscheerish living in Queens, New York than there are in the old country.

Likewise, speakers of Vlashki, an Istro-Romanian language from Croatia, have clustered in Queens even as their Croatian villages were abandoned. Now, New York University professor Zvjezdana Vrzic, who grew up speaking Vlashki, is leading an effort to preserve and revitalize it.

In 2017, the United States government is moving toward policies that are isolationist, at best.  New York City has always been America’s most diverse city, and Americans have always had an uncomfortable relationship with its diversity. (See Jacob Riis’ How the Other Half Lives for an example of how even reformers in the late 19th century viewed newly arrived immigrants, especially of the nonwhite, non-Protestant variety).

But the Big Apple, the world’s most linguistically diverse city, is also “the cultural and financial capital of the world.”  Perhaps that’s because of the city’s diversity, not in spite of it?

3 thoughts on “Which City Speaks the Most Languages?”