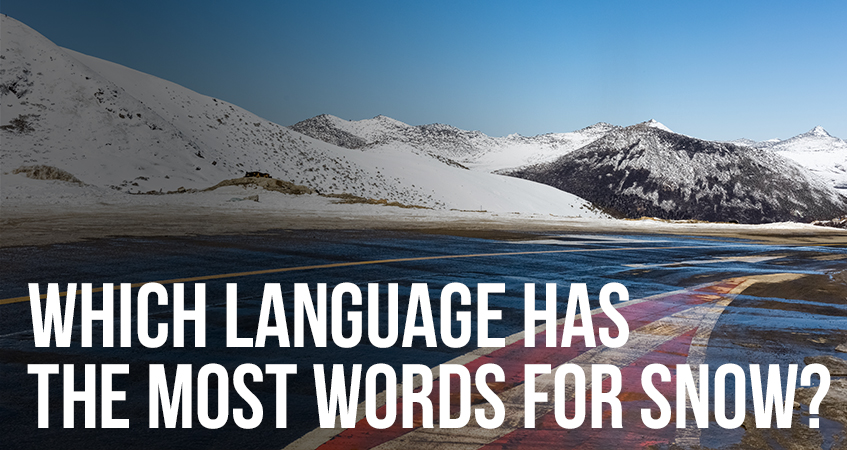 Have you ever wondered which language has the most words for snow?  Last week, Rich addressed the topic of whether or not “Eskimos” (aka Inuit, Yupik and related peoples) actually have 50 words for snow.  But did you know that other languages have even MORE words for snow?

It’s true! So, which language has the most words for snow? It’s probably impossible to say for sure. There are always questions about what counts as a word. For example, how do you count polysynthetic or compounding languages, where one “word” can contain as much information as some English sentences? Nevertheless, here is a list of the top contenders:

This topic never fails to generate quite the controversy in linguistic circles, with some calling it “The Great Eskimo Vocabulary Hoax.” Rich cites new research from Igor Krupnik that shows Inuit languages do have around 40 to 50 words for snow, depending on the dialect.

Swedish is another compounding language. So, depending on how you’re counting, it could either have many words for snow or very few. In this post, Neil Shipley manages to round up a respectable 25 Swedish words for snow. Here are some highlights:

The Sami live in the far north of Norway, Sweden, Finland and Russia. Traditionally, they were fishers, trappers and reindeer herders. As you might expect from Europe’s northernmost indigenous people, the Sami have at least 180 words for snow and ice. For example:

But that’s nothing compared to how many words they have for reindeer: over 1000, according to some sources!

According to Hulda at the Transparent Language blog, there’s an Icelandic proverb that claims the language has over a hundred words for snow.  That may be an exaggeration, but the Icelandic language does have a rich vocabulary of snow terminology. How many words do they have for snow? At least 46, according to TotalIceLand.com. Here’s some cool frozen Icelandic vocabulary for you:

Which language has the most words for snow? According to researchers at the University of Glasgow, the winner is….Scots! They claim that Scots has 421 words for snow. Does it really? Here again, it’s all in how you count. The researchers came up with the list while working on a thesaurus for the Scots language. Their list includes quite a few compound words, and the folks at Language Log are quite skeptical of the “421 words” claim.  But it’s still impressive.

Here are some of our favorite snow words in Scots:

Why so many words for snow? Dr. Rennie told the BBC, “Weather has been a vital part of people’s lives in Scotland for centuries. The number and variety of words in the language show how important it was for our ancestors to communicate about the weather, which could so easily affect their livelihoods.”

Is it snowing where you are? And if so, can you send some here, please? Feel free to discuss snow and how different languages describe it in the comments!

Previous Post Do the Eskimos Really have 50 Words for Snow?
Next Post 5 Examples of Powerful Global Branding in Action

3 thoughts on “Which Language Has the Most Words for Snow?”