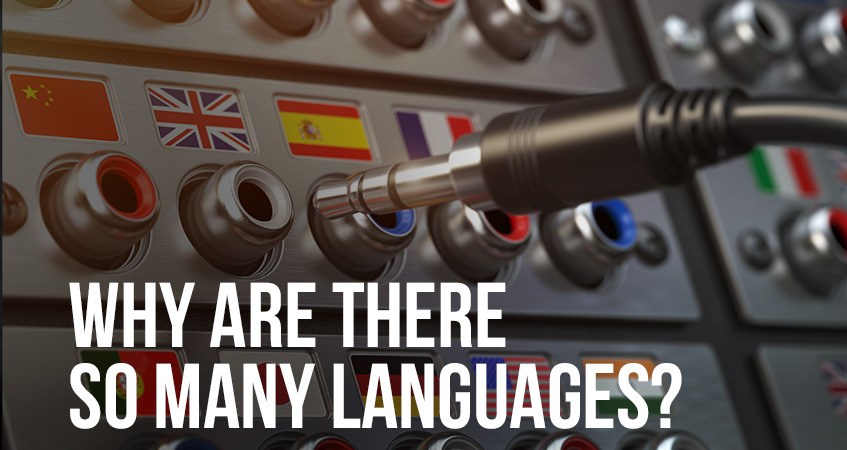 There are approximately 7,000 languages in the world today. But why? Why are there so many languages?

It’s an ancient question, almost as old as humanity itself.  Explanations for why people speak so many languages are common in myths from cultures around the world. The story of the Tower of Babel in the Bible is one well-known example, but there are many others.

The truth is, we don’t have an easy answer for why people speak so many languages. That’s probably because there isn’t one.  Instead, linguistic diversity is a response to a variety of different elements that we’re only beginning to understand.  We may not have an answer, but here are 6 factors that encourage new languages to form.

Language May Have Developed In More Than One Place

Did humans ever speak just one language? We don’t know. There are two schools of thought:

So there may have been quite a bit of language diversity right from the start. But even if there was a single common human language to start out, humans would still speak thousands of different languages. That’s because . . .

The main reason why there are so many languages has to do with distance and time. Groups of people are always on the move, seeking new opportunities. And languages change over time, too. Even English. Do remember trying to read Chaucer for the first time?  English has changed so much over the centuries that it’s difficult for modern English speakers to “get” Chaucer without footnotes.

What happens when you combine these two factors? Groups of people who speak a common language get divided by distance, and over time their dialects evolve in different directions. After enough time passes, they end up speaking two separate, but related languages.

War can lead to the formation of new languages, or to the extinction of established languages. War can divide populations that once spoke a common language, so new languages form. But war can also lead to language death, as the conquered are forced to speak the language of their conquerors.

But none of the reasons above explain why languages are distributed so unevenly around the world. For example, Europe has around 225 indigenous languages, depending on how you count them. But tiny Papua New Guinea has at least 820 languages!

This is largely because of the island’s unforgiving geography.  Mountains, forests, rivers, and swamps keep the inhabitants divided into many small tribes. These tiny groups have been so isolated for so long that they’ve developed different languages in many cases.

Why Are There So Many Languages? Blame It On the Rain!

Another factor that seems to affect language diversity, at least in some parts of the world, is rainfall. Researchers from the National Evolutionary Synthesis Center recently experimented with using computer modeling to identify factors that affect indigenous language diversity in Australia.

The researchers found that in Australia, rainfall patterns affected the number and distribution of Aboriginal languages in the country. That might sound surprising, but it makes sense if you think about it. In Australia, rainfall determines how many people a given area can support. Areas with more rainfall can support more groups of people, which influences how many languages can develop.

“Acoustic adaptation” is another factor that explains not just why there are so many languages, but why they all sound so different. But what does “acoustic adaptation” mean, anyway?  Simply put, it has to do with the way animals tailor their songs or calls to their environment to make themselves heard.

For example, in dense forests and hot climates, consonants are harder to hear than vowels.

In 2015, researchers from the University of New Mexico and Laboratoire Dynamique du Langage-CNRS in France looked at 628 languages from around the world and compared their different linguistic characteristics with the climates where the languages developed.

According to IFLScience, they found that ” languages originating in warm areas with dense tree cover tended to use less consonants, and were instead characterized by a higher prevalence of vowel sounds, which are transmitted at lower frequencies. In total, it is thought that acoustic adaptation may be responsible for about a quarter of the variation in vowel and consonant use between languages.”

Does It Matter Why There Are So Many Languages?

At the end of the day, the languages of the world are important for reasons that have nothing to do with acoustic adaptation or historical migration. They are important because they bind communities and cultures together. They preserve knowledge and connect people to their heritage. For these reasons, and many others, linguistic diversity is worth celebrating and preserving, no matter how it came to be.

Translation is vital to perserving languages, and we’re here to help . Check out our array of translation services, and if we can help with your translation needs we’d love to hear from you!

3 thoughts on “Why Are There So Many Languages? ”