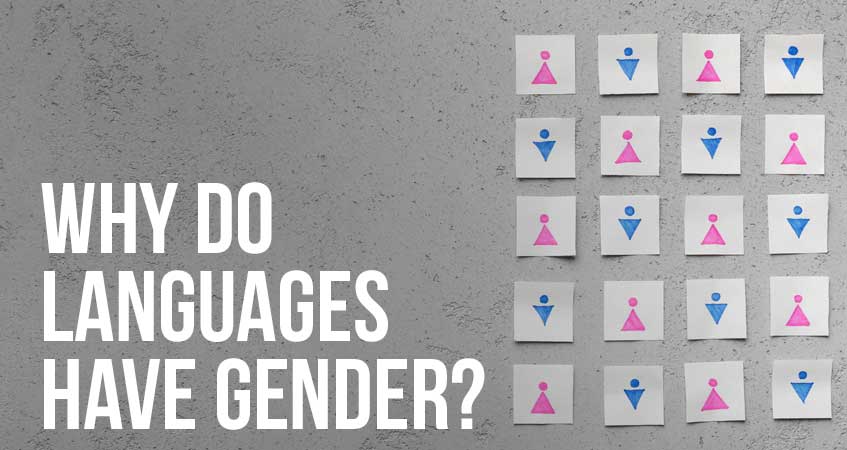 Why do languages have gender? For an English speaker, grammatical gender is one of the most vexing aspects of learning a new language. As Mark Twain once wrote in reference to German:

“A person’s mouth, neck, bosom, elbows, fingers, nails, feet, and body are of the male sex, and his head is male or neuter according to the word selected to signify it, and not according to the sex of the individual who wears it! A person’s nose, lips, shoulders, breast, hands, and toes are of the female sex; and his hair, ears, eyes, chin, legs, knees, heart, and conscience haven’t any sex at all…”

Doesn’t seem to make much sense, does it? And yet many, if not most, languages across the world divide nouns up by “gender,” often in quite arbitrary ways. Here’s a quick primer on this interesting language characteristic, along with some tips and tricks to make learning gendered languages easier.

In some languages, grammatical gender is more than just “male” or “female.” Some languages have a “neuter” class, while others have different genders for animate versus inanimate objects.

Languages also have different ways of assigning gender. Some languages go by the physical characteristics of the object in question. Often, mythology and cultural views on gender come in to play, too. For example, in the Alamblak language of Papua New Guinea, the masculine gender “includes things which are tall or long and slender, or narrow (e.g. fish, snakes, arrows and slender trees).” Hmmm. I wonder why?

Meanwhile, the Zande language of Africa divides nouns into 4 genders: masculine, feminine, animal and inanimate. However, some inanimate objects that are important in Zande mythology are classified as animate.

Other languages assign gender based on the ending of the word. For example, Spanish words that end in -a are usually feminine.  That’s why la mesa is feminine even though a table doesn’t physically have a gender.

Why Divide Nouns By Gender?

Why do gendered languages exist? After all, English does perfectly well without assigning “feminine” and “masculine” characteristics to objects that lack genitalia.

Actually, English used to be a gendered language, too. English speakers stopped classifying most nouns by gender during the Middle English period.

Basically, gender in languages is just one way of breaking up nouns into classes.  In fact, according to some linguists, “grammatical gender” and “noun class” are the same thing.  It’s an inheritance from our distant past. Researchers believe that Proto-Indo-European had two genders: animate and inanimate. It can also, in some cases, make it easier to use pronouns clearly when you’re talking about multiple objects.

Fun Facts About Gender and Language

Tips and Tricks For Language Learners

If you grew up speaking a nongendered language like English,  trying to learn a gendered language can be tricky. You have to remember which word goes with which gender, a classification that is often completely arbitrary and counterintuitive. Here are some helpful hints.

When Grammar and Gender Politics Collide

More concerningly, another study looked at languages around the world and found that “on average, countries where gendered languages are spoken ranked lowest on the scale of gender equality.”

Eventually, some languages may shed their pesky nonsensical gender distinctions as the countries that speak them pursue equality between men and women. The Guardian has suggested this may be on the horizon for German.

What do you think? Does grammatical gender make it more difficult to learn a new language? Should languages that use grammatical gender try o find a new system to use in the name of equality, or is that a bridge too far?  Share your thoughts in the comments!

38 thoughts on “Why Do Languages Have Gender?”