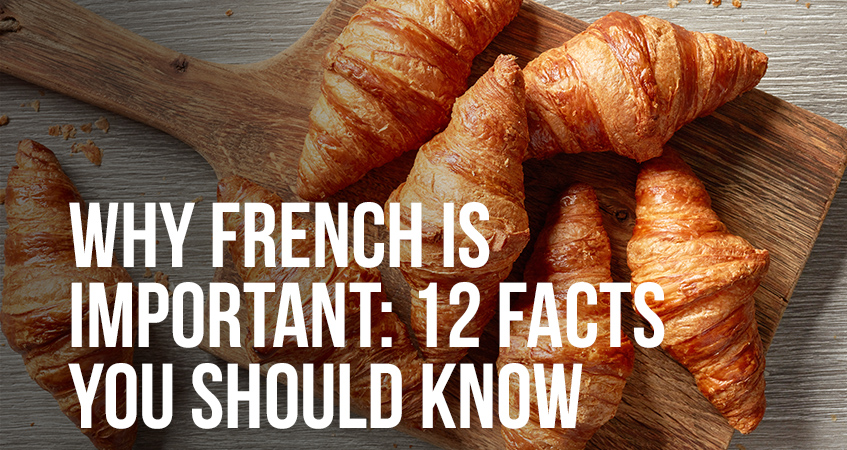 In that spirit, we’d like to offer our own salute to the French language.  Over the past few years, it’s become somewhat fashionable to say that French is passé. For example, see this article in the New Republic, called “Let’s Stop Pretending That French Is an Important Language.”

So, why is French important in today’s world?

Here are 12 reasons  why French is still an important language (and one that global businesses can’t afford to ignore.)

80 million people around the world speak French as a native language.

61 million of them live in France, naturally. But French-speaking communities exist around the world:

Amongst EU citizens, French is the fourth most common mother tongue. Or maybe it’s the second most common. It depends on who you’re asking.

Meanwhile, 1 out 5 Europeans speaks French as a second language.

French is the only language other than English that is spoken on at least 5 continents.

Like English, French is truly a global language.  French is an official language in Europe (of course), but also in North America, South America, Africa, Asia and French Polynesia.

The number of French speakers is growing, rapidly.

French may not enjoy the same level of prestige it had in the 17th century, but it’s not a language in decline.  Far from it. In fact, demographic projections show the number of French speakers almost doubling to 500 million in 2025 and 650 million by 2050.

Many of these new French speakers will come from rapidly growing Africa. In fact . . .

Africa is the continent with the most French speakers in the world.

Are you surprised? French is an official language in 29 African countries, where it is generally spoken alongside indigenous languages.

Within the next decade, French could become the most widely-spoken native language in Europe.

According to the France Diplomatie website, “Demographers forecast that France’s birth rate will make French the most widely spoken mother tongue in Europe, ousting German, by 2025.”

Bloomberg ranked French the third most useful language for business.

Only Mandarin and English ranked higher.

Over 87 major international organizations use French as an official administrative or working language.

The list includes the United Nations, the European Union, the African Union, the Red Cross, the Word Trade Organization, NATO, FIFA and more.

French is the 6th most common language on the Internet.

4.1% of content from the top 10 million websites it written in French.  As of June 2016, 102,171,481 Internet users were French speakers. This number will probably increase as more and more of Africa gets online.

At least 29% of modern English vocabulary comes from French.

The English language owes quite a bit to French, like over a quarter of our vocabulary. Some sources even claim up to 45% of English words have French origins.

French is one of the easiest languages for English speakers to learn.

It’s second only to Spanish, which has a simpler grammar. That said, as noted above, English vocabulary has more in common with French than with Spanish.

French is an important language for international business.

There’s no getting around it. French is an important language for international business.  The French economy is the sixth-largest in the world. It’s the third-largest economy in Europe.  And it’s in fourth place in the Fortune Global 500, outranked only by the US, China, and Japan.

French is also an official language for some of the most dynamic emerging economies in Africa. For example, these are the African economies expected to grow the most in 2017, according to Quartz:

French is an official language in all but Morocco. And even in Morocco, French is an important language. It serves as “Morocco’s primary language of commerce and economics, culture, sciences, and medicine; it is also widely used in education and government.”

For these reasons, according to the British Council, 49 percent of UK businesses are seeking out French-speaking employees.

And remember, if you need help with French translation, you know where to find us!

3 thoughts on “Why French is Important: 12 Facts You Should Know”