How underrepresented? You’re probably familiar with the statistic that only about 3% of published works in the US and the UK are translated from other languages. Well, of that 3%,  only about 30% of new translations into English are books by women writers.  Books by female authors are translated at a lower rate around the world, even in Europe.

With that in mind, a few years ago we recommended 9 books to read for women in translation month. Now, we’ve updated this post to add 6 more recommendations for your reading pleasure, for a total of 15 recommended books. Read the ones that pique your interest and you’ll soon start to wonder what else you’re missing out on!

6 More Books to Read for Women in Translation Month 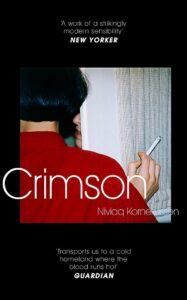 Originally published in Greenlandic and Danish as Homo Sapienne, this novel drops you right in the middle of queer youth culture in modern-day Nuuk, Greenland. It’s a quick read, with less than 200 pages, and told in a social-media-friendly style complete with hashtags.

If you like feminist books that explore the blurry line between fairy tales and horror, this collection of short stories from Indonesian author Intan Paramaditha is for you. This was a White Review Book of the Year in 2018. 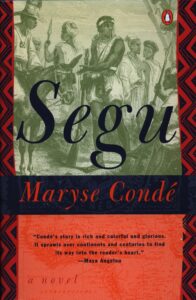 If your tastes run more to sweeping works of historical fiction, Segu tells the story of a West African kingdom in 1797. Located in what is now Mali, the leaders of the kingdom grapple with the influence of new religions and of the slave trade. While it was originally published in French in 1984 and translated into English in 1987, it won the Alternative Nobel Prize for Literature in 2018.

This unsettling, award-winning novel takes place on a dystopian island where objects disappear and people must forget…or be taken away by the Memory Police.

This novel was the last masterpiece from Croatian author Daša Drndic, who died in 2018. It won the 2020 Best Translated Book Award. Fair warning:  A meditation on death, and the horrors of genocide, it’s not a light beach read.

This novel uses the aftermath of a short love affair between a Syrian woman and a man she meets in her therapists’ waiting room to explore the line between reality and fiction and the traumas inherent in living under a dictatorship.

Our 9 Original Recommendations For Women in Translation Month

Our original list is still worth checking out, if you haven’t yet.

Kalpa Imperial: The Greatest Empire That Never Was

In a 2016 interview, Meytal Radzinski, the scholar behind Women in Translation Month, called this book her “go-to first choice for just about any type of favourite book these days! It’s such a special book, gorgeously written and so utterly magical.”

Kalpa Imperial: The Greatest Empire That Never Was is the history of an imaginary nameless empire, as told by multiple storytellers.  Translator Ursula Le Guin is an acclaimed fantasy author in her own right.  So it’s not surprising that publisher Small Beer Press boasts that “Rarely have author and translator been such an effortless pairing.”

The Vegetarian: A Novel

This haunting novella by South Korean author Han Kang won the Man Booker International Prize in 2016. It describes a Korean housewife’s descent into madness after nightmarish dreams prompt her to become a vegetarian. (I should note that there is some controversy regarding the accuracy of the translation), but it’s the only one we’ve got. )

The End of Days

This book from German author Jenny Erpenbeck takes you through several possible lives (and deaths)of a baby born in the Hapsburg of the early 20th century.  The Guardian calls it “shot through with an insight that almost blinds.”

The Guardian calls this first novel by Argentinian author Samanta Schweblin “short, terrifying and brilliant.” Also, it was on the long list for the Man Booker International Prize. Reviews on Amazon, however, are mixed. So apparently, this is one of those books you either love or hate.

This is another debut novel. It’s the first by Polish poet Wioletta Greg. This coming-of-age tale set in a small, rural village in communist Poland was also on the long list for the Man Booker International Prize. Meanwhile, the Guardian calls it “a richly textured portrait of a culture now lost: rural life under one of the milder communist regimes.”

This novel follows two friends growing up in 1950’s Naples.  Studious Elena and fiercely intelligent wild child Lila struggle for education and a better life. This is the first novel in a four-part set.  Goodreads calls it “a modern masterpiece from one of Italy’s most acclaimed authors” and a “rich, intense and generous-hearted story.”  Meanwhile, an HBO series based on the novels is currently in the works.

Eve Out of Her Ruins

From the outside, the islands of Mauritius look like paradise. But instead, Eve Out of Her Ruins takes the reader to a paradise lost,  as seen through the eyes of four young friends. Writing for The Guardian, publisher Deborah Smith said she was  “blown away by the sensual prose and startling images.”

Next, let’s look at Mirror, Shoulder, Signal by Danish author Dorthe Nors.  This novel follows the struggles of Sonja, a middle-aged translator living in Copenhagen. In the novel, she attempts to finally learn how to drive . . . and how to cope with life in general. Shortlisted for the Man Booker International Prize, the Economist calls Mirror, Shoulder, Signal “a magnificent exploration of anxiety.”

What was it like to grow up as a refugee of the Rwandan genocide? Cockroaches is a memoir that describes growing up Tutsi in Rwanda and then living as a refugee in Burundi.  One Amazon reviewer calls it “a gut-punch of a book. It’s a blunt, human, and wonderfully written account of the author’s childhood, growing up as a “cockroach” in racist/genocidal Rwanda.”

Not beach reading, but worth your time anyway.

Got any more recommendations? Let us know in the comments!

Tags: Books
Previous Post How to Help Afghan Interpreters and Translators
Next Post 6 Things to Consider When Transcribing Research Interviews