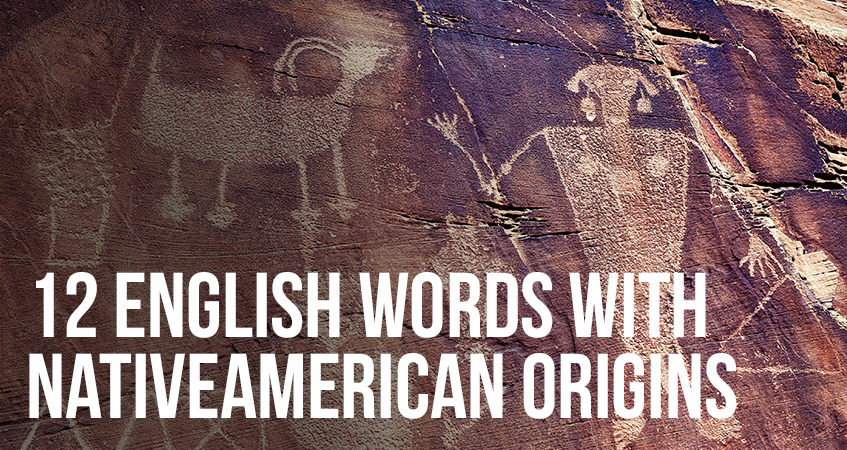 Monday was Columbus Day in the United States.  Traditionally, American schools taught children that the Italian explorer has a holiday because he “discovered the New World.” That’s not true, of course. But he did ignite a cultural exchange that shaped the world we live in today.

This pattern continued when it came to language. Many native languages were lost forever. But some words from indigenous languages live on today as loanwords. For example, check out these 12 English words with Native American origins:

English Words That Come From Algonquian

The Algonquian language family consists of about 30 languages spoken by Native Americans across the US and Canada.  Unfortunately, many of these languages are either severely endangered or extinct.  Did you know these four words were originally Algonquian?

Well, now you do.

Caucus:  Wikipedia defines a “caucus” as “a meeting of supporters or members of a specific political party or movement.”Although it originated in the British colonies, it’s used across the English-speaking world now.  It may originate from the Algonquian word for “counsel”, which is ‘cau´-cau-as´u’. Another possibility is the Algonquian cawaassough, which means advisor, talker, or orator.

Hickory: Hickory dickory dock, the mouse ran up the clock … Thank the Algonquians for this old nursery rhyme, It wouldn’t be the same without hickory, which comes from the Powhatan word pocohiquara. Pocohiquara was basically hickory nut milk.  The next trendy nut milk at your local supermarket, maybe?

Possum or Opossum: This odd-looking animal known for playing dead when threatened. Its name comes from the Powhatan word apasum, which translates to “white dog-like animal.” When Europeans colonized Australia, they borrowed the word to describe an unrelated but similar marsupial.

Woodchuck: How much wood would a woodchuck chuck? None, if not for Narragansetts, who named this little animal ockqutchaun. This was later anglicized into “woodchuck,” which sounds as if it could have been part of the English language forever.

English Words that Come From Nahuatl

Nahuatl is a family of languages and dialects that hail from Mesoamerica. It was the language of the Aztecs. But you probably speak a few words of Nahuatl, too. Check out these loanwords:

Avocado: Why do we call avocados “avocados?” Because the Aztecs thought they looked like testicles.  No joke, the word avocado originates from the Nahuatl word  āhuacatl, which means “avocado” or “testicle.”

Chili: Chili peppers originated in the New World. Did you know there were no chili peppers anywhere else in the world until after the Columbian exchange? It’s hard to imagine Indian food or Thai food without them! Chili comes from the Nahuatl word chīlli.

Traditionally, the Arawakan language family was spoken throughout South America, in Central America in the Caribbean. When Columbus first landed in the Bahamas, the natives spoke an Arawakan language.

In honour of those long-gone natives and the languages they spoke, here are 5 familiar words that made their way from Arawakan languages into English.

Barbecue: These days, the United States and Australia are both famous for barbeque. But they didn’t invent the word. It comes from the Arawakan word barbakoa,  which means “framework of sticks.”

Canoe: The word canoe comes from the Taíno word kanowa, or “boat.”

Hammock: Hammocks symbolize relaxation around the world today. For that, we can thank the Taíno and their hamaka.

Savanna: When you hear the word “savanna”, do you think of Africa? Africa’s savannas are iconic, but the word itself comes from the Taíno word sabana.

Cannibal: Cannibalism is one of humanity’s oldest taboos. Accusations of cannibalism (true or not) have also been frequently used to characterise indigenous people as “savages” and fair game to be enslaved or colonised.  You can see this tendency in the origins of the word itself. “Cannibal” comes from the Taíno word kaniba. And kaniba means “person from the Caribbean.”

There’s a movement afoot in the US to reclaim Columbus Day for Native Americans.  Some cities and states have begun to celebrate “National Indigenous Peoples Day” instead of Columbus Day.  Some people call Columbus a courageous explorer. Others call him a deranged, blood-and-gold obsessed lunatic (and no matter what else he was, he was that). Either way, it’s important to honour the native people who lost so much as a result of his “discovery.”

Did any of the words with Native American origins in this list surprise you? Let us know in the comments!

Previous Post Is Google Translate Really As Good As a Human Now?
Next Post How Climate Change Threatens Endangered Languages and Cultures