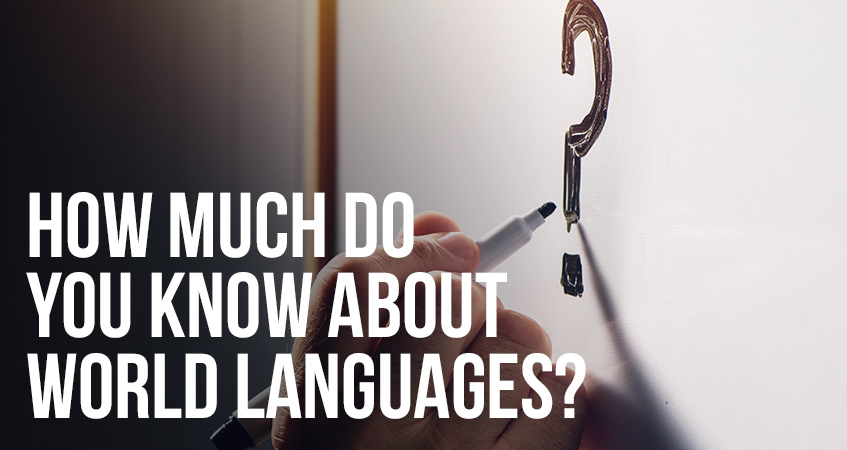 Do you fancy yourself a language expert? How much do you REALLY  know about languages around the world? Take our quiz on world languages and find out!

Answers are below the fold!

Which language has the most native speakers?

Which language is most frequently learned as a second language?

Did you choose French or Spanish? Those are common languages to study … if you grew up in an English speaking country! Around the world, the most commonly learned second language is English.

Which language is “the language of love?”

French has had a romantic reputation since at least the Middle Ages, when French-speaking troubadors spread tales of fair maidens, brave knights and courtly love throughout the land.

Which is the longest real word in any language?

The longest word in any language is this Sanskrit word, transliterated into the Roman alphabet:

“In it, the distress, caused by thirst, to travellers, was alleviated by clusters of rays of the bright eyes of the girls; the rays that were shaming the currents of light, sweet and cold water charged with the strong fragrance of cardamom, clove, saffron, camphor and musk and flowing out of the pitchers (held in) the lotus-like hands of maidens (seated in) the beautiful water-sheds, made of the thick roots of vetiver mixed with marjoram, (and built near) the foot, covered with heaps of couch-like soft sand, of the clusters of newly sprouting mango trees, which constantly darkened the intermediate space of the quarters, and which looked all the more charming on account of the trickling drops of the floral juice, which thus caused the delusion of a row of thick rainy clouds, densely filled with abundant nectar.”

How Many Languages Are There in the World?

Estimates vary, and sometimes it’s hard to tell the difference between a languages and dialect. That said, it’s generally accepted that there are around 7,000 living languages in the world today.

How Often Do Languages Die?

Unfortunately, many smaller languages are not being passed on to the next generation. In fact, it’s estimated that another language disappears forever every 14 days. According to the New York Times, nearly half of the languages in use today will be gone within the next century.

Which Language Has the Longest Alphabet?

That would be Khmer, with 74 letters. The Khmer alphabet has 33 consonants, 23 vowels and 12 independent vowels.

Which Language Has the Shortest Alphabet?

The shortest alphabet that’s currently in use is the Rotokas alphabet. It has only 12 letters.

What is the World’s Most Translated Document?

The United Nation’s Universal Declaration of Human Rights has been translated into 370 different languages and dialects. That makes it the world’s most translated document according to the Guinness Book of World Records.

What is the world’s most translated book aside from the Bible?

You might be surprised to find out it’s The Adventures of Pinocchio, which has been translated 260 times from the original Italian.

Which Country Has the Second-Largest Population of Spanish Speakers?

Did you guess Mexico? Spain? Actually, that would be the United States, with 45 million Spanish speakers.

Who is the World’s Most Translated Author?

Where Was the Oldest Written Language Found?

It’s generally accepted that the earliest invention of writing took place in ancient Sumer, around 3200 BC. Written language was also independently invented in Mesoamerica in 600 BC, and possibly also in ancient Egypt and ancient China as well.

Which Language Has the Fewest Words?

The language with the fewest words in the world is Taki Taki, a Creole language spoken by around 500,000 people in the tiny South American country of Suriname. It has only 340 words.

Which language has the most words? We skipped that question because the rules for how to form words differ so much between languages that it’s almost impossible to answer!

Which Language Has the Most Written Characters?

How well did you do? Were you surprised by any of the answers? Share your score in the comments!